Ally, Mary Jane, Josephine and Reed happened to arrive just as Xi Jinping, head of Chinese Communist Party (CCP), was arriving for a state visit. They were surprised to see the peaceful Falun Gong protest assembled to meet him, and asked what was happening.

Ally said, “I learned about the history of communism in Vietnam, but I thought communism was a thing of the past. I didn't know it still haunts China today. I support you! Let's work together to stop the persecution.”

Mary Jane said she would go online to learn more, after learning about the crimes of live organ harvesting.

The practitioners were calling for a stop to the 15-year-long brutal persecution of Falun Gong, and bringing the perpetrators (Jiang Zemin and Zhou Yongkang, etc.) to justice. 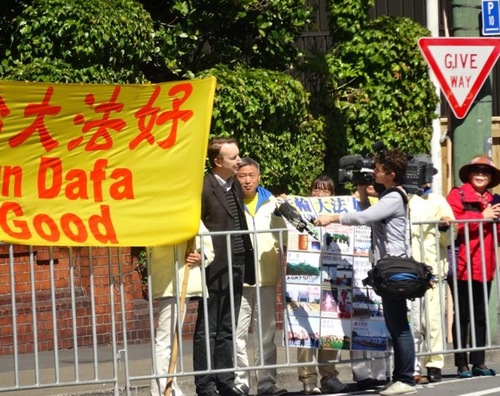 Lawyer Kerry Gore, a spokesperson for Falun Gong, is interviewed by local media. 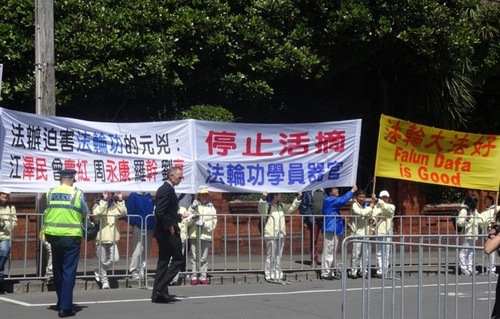 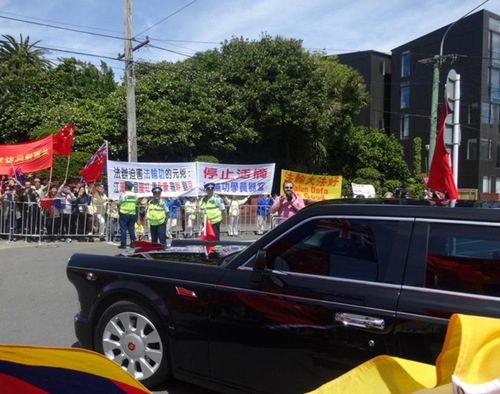 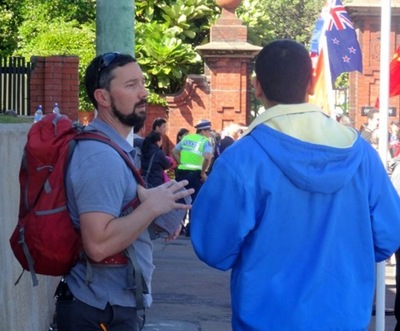 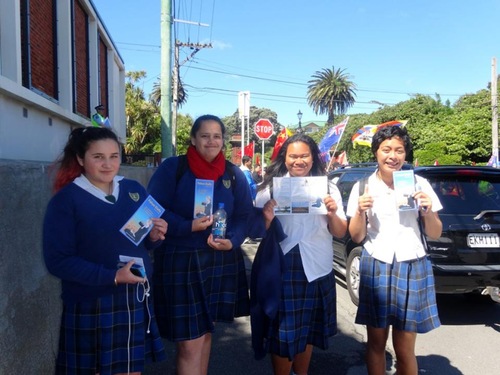 The passengers in Xi's motorcade looked out as they entered the yard of Government House, the residence of the Governor General for New Zealand. They were confronted with large banners exclaiming “Falun Dafa is Good,” “Stop Live Organ Harvesting from Falun Gong Practitioners,” and “Bring the Main Perpetrators Jiang Zemin, Zeng Qinghong, Luo Gan, and Zhou Yongkang to Justice.”

Local media reported that Falun Gong was holding a peaceful protest here in New Zealand while practitioners in China were being brutally persecuted and even subjected to forced organ harvesting. 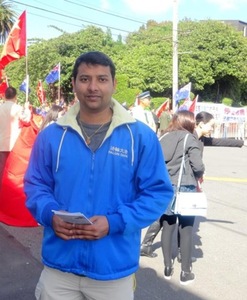 A passerby named Adam asked what the banners (written in Chinese) meant. A practitioner explained the facts to him. He said, “Good luck! New Zealand is a country of freedom. Everyone can express his voice. I support you!”

Mark, a security guard at the Government House, said he had lived in Hong Kong for many years. He said, “I know Falun Gong. Practitioners' efforts opposing the persecution remind me of Gandhi’s peaceful protests in India. The Communist Party is misleading the Chinese people, and turning them into machines, instead of individuals with independent thinking.”

In contrast to the peaceful protest by Falun Gong practitioners, Chinese students arrived by bus, and assembled for a raucous welcome to the Chinese delegation. A passerby asked if they came voluntarily. One answered, “No. We were paid.” They declined to answer questions when a TVNZ reporter asked who organized them to come.

A Chinese who appeared to be in charge ordered the students to block the Falun Gong banners. They drove a car and parked in front of the practitioners several times, attempting to block the banners, but were stopped by police each time.