(Minghui.org) Today's news from China includes persecution that took place in 9 cities or counties in 6 provinces. According to this report, 7 practitioners were subjected to mistreatment during detention, at least 5 practitioners were illegally arrested. 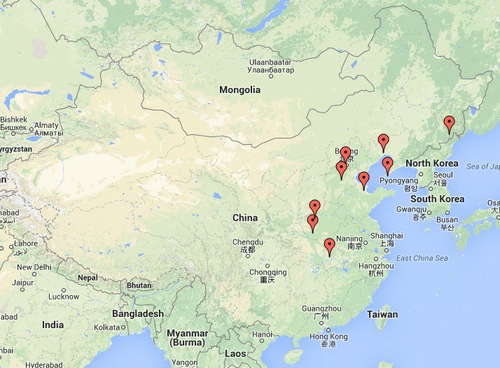 Ms. Zheng Cuihua and Ms. Tan Zhiying went to Changlongdao in Jiangxi District, Wuhan to distribute informational materials about Falun Gong at noon on November 8, 2014. They were reported to police and arrested. The police took them to the Sanzhigou Women's Detention Center for a 15-day term.

Ms. Zhou was arrested by police when distributing calendars with messages about Falun Gong in November 2014.

Ms. Suo Xizhen from Tongluozhai, Luoyang went to distribute informational materials about Falun Gong on November 8, 2014. She was arrested by officers from the Jinguyuan Police Station. Her sister, Ms. Suo Xuezhen was arrested by officers from the Changchunlu Police Station the next day. Her home was ransacked. The two practitioners are being held at the Luoyang Detention Center.

Ms. Yao Fumin from Zhenping County recently went to Neixiang County to talk to people about Falun Gong. She was arrested by officers from the Guanzhang Police Station.

Ms. Meng Zhanrong, Ms. Zhang Shuhui and Ms. Du Jinxiu from Lixian Town, Daxing District, Beijing were arrested on April 16, 2014. They were held at the Daxing Detention Center. As a result of persecution, Ms. Zhang has myoma of the uterus and unable to tend to herself.

Ms. Liu Junling was arrested by officers from the Xiaopingdao Police Station in Ganjingzi District on October 25, 2014. Her home was ransacked. Officers took away Falun Dafa books, her laptop, printer, cell phone and other belongings. Ms. Liu is being held in the Yaojia Detention Center.

Mr. Xu Qiang was arrested when he went to Beijing to appeal for Falun Gong in June or July 2000. He has been missing for 14 years.

Ms. Liu Fengnu in her 70s went to Beishibao Village, Fuzuo Township to talk to people about Falun Gong on the afternoon of June 29, 2014. Someone reported her to police and did not let her leave on her bicycle. She fell and cut her head which bled profusely. Ms. Liu was taken to the hospital and given five stitches. Her arm was broken. She is still hospitalized.

Mr. Xu Jinyou from Shengli Oil Field was held at the Binhai Detention Center in Niuzhuang Town, Dongying. His 15-day term was over on November 10, 2014. Mr. Xu has been transferred to the Jishu Brainwashing Center.

““We Cannot Let These Chinese Tourists Down””