(Minghui.org) “For one life, eight people lost their lives.” Every time he talked about his investigation into live organ harvesting in China, David Kilgour couldn't hide the sadness in his voice. Mr. Kilgour is the co-author of the book Bloody Harvest and is a former Canadian Secretary of State for Asia-Pacific.

Back in 2003, a 32-year-old man received kidney transplantation at the No.1 People's Hospital in Shanghai. Due to an antibody problem, he received four kidneys in eight days, but all of them were rejected.

Three months later, he returned to the hospital and received four more kidneys and finally had one that wasn't rejected by his body. The surgeon was Tan Jianming, who is currently the vice president of Fuzhou General Hospital of Nanjing Military Region and also the director of the urology department.

Tan has done more than 4,200 transplants of kidney alone and also won the 9th Physicians Award winner in 2014. 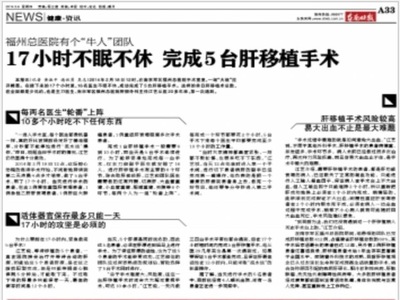 In the above screenshot of from an article in the Southeastern News Express dated March 6, 2014, it praises the Fuzhou General Hospital of Nanjing Military Region for its “miraculous” achievement where a team of surgeons completed five liver transplantation procedures in 17 hours on February 18, 2014.

According to the lead surgeon, Jiang Yi, who is also the director of the Department of Hepatobiliary Surgery, five patients already found matching livers and waited for them at the hospital. The five “donors” “died” on the same day, and all five livers were transplanted successfully in 17 hours.

The speed at which these livers became available is unheard of in the West, where a comprehensive organ donation system exists. China does not have a robust organ donation system because it's a custom to keep the body intact after death. The number of organ transplantation operations increased exponentially in military hospitals, armed police hospitals and civilian hospitals.

The report, “The Communist Regime's Military and Armed Police Hospitals Involved in Harvesting Organs from Living Falun Gong Practitioners in China,” published on October 28, 2014 by the World Organization to Investigate the Persecution of Falun Gong (www.upholdjustice.org), cited more details of the involvement of the Fuzhou General Hospital of Nanjing Military Region.

The hospital did 808 kidney transplants from 1979 to 1998, with an average of 40 a year. The number skyrocketed to an average 177 procedures from the end of 2000 to 2004, totaling 887 kidney transplantation in less than five years. The annual rate is 4.5 times more during the persecution than before the persecution. Since transplantation operations do not have a 100% success rate, more kidneys were actually harvested than the report indicates.

Professor Arthur Caplan, former director of Bioethics Center at the University of Pennsylvania, said that it is “a shame of mankind” that “killing on demand” to harvest organs has happened frequently in China and lasted for over a decade.

Former US think tank researcher Ethan Gutmann, author of the book The Slaughter, says that the focus is not about whether the killing of Falun Gong practitioners to harvest their organs is actually happening, but rather, how large the killing scale is, how many people have been killed, and whether it's still continuing.

“Back then it was from Chairman Jiang,” said Bai. “Under his orders, many of us had done a lot of work to eliminate Falun Gong. To be fair, kidney transplantation is not limited to military (hospitals).” The audio file of the call was published by the World Organization to Investigate the Persecution of Falun Gong in September 2014.

An anonymous source in China also provided a recorded conversation between former Minister of Commerce Bo Xilai and an official at the Chinese Embassy in Germany, to foreign media in August 2013.

The recording was made when Bo Xilai was visiting Germany as the Minister of Commerce and confirms that Jiang Zemin gave the order to forcefully harvest Falun Gong practitioners' organs.

In July 1999, former Chinese Communist Party head Jiang Zemin launched a brutal persecution on Falun Gong. His mantra for the persecution: “defame their reputations, bankrupt them financially, and destroy them physically,” “those beaten to death are to be considered suicides,” and “[once they are dead] there is no need to verify their identity, directly cremate their bodies.”

Forced organ harvesting from living Falun Gong practitioners was an evil “invention” by Bo Xilai when he was the Communist Party's general secretary in Dalian City, Liaoning Province. Promoted by top leaders of the military and police force, the practice was industrialized and monetized.

The Chinese military and armed police expanded and built large concentration camps, prisons and forced labor camps inside military bases to hide this crime from the public.

One military doctor working for the Logistics Department of Shenyang Military Region told foreign media that there are at least 36 detention facilities or camps that are similar or even larger than that in Sujiatun, Shenyang City. Sujiatun was the first location where organ harvesting crimes were exposed in March 2006 by a journalist and the wife of a former surgeon who specialized in harvesting corneas at the Sujiatun Hospital.

“Camp number 6721S in Jilin Province has jailed 120,000 Falun Gong practitioners and other dissidents. A concentration camp in Jiutai District Changchun City, Jilin Province has 14,000 prisoners.” He went on to write, “Those prisoners are classified as a 'state enemy.' Falun Gong practitioners are no longer treated as human beings, but raw materials or commodities for the organ harvesting and transplantation industry.”

The General Logistics Department of the People's Liberation Army set up a central database system as a living organ bank. The database includes the identity of detained Falun Gong practitioners and other pertinent information such as their blood type.

The General Logistics Department is responsible for the security of the secret camps, managing the availability of organs for the hospitals, as well organ transportation, accounting and security. Military and police hospitals are the major players in the organ harvesting industry. Selling organs to civilian hospitals is more of a showroom to attract foreign transplantation patients, then make a small profit.

The same military doctor who did not want to be identified confessed that he was ordered to create more than 60,000 fake voluntary organ donation forms and that, “the real number of available organs in China would at least triple the publicized numbers in state media. If the government said it was 30,000 cases in a year, the real numbers could be 110,000 a year.” He also said that China is the center of a global organ traffic network and has provided more than 85% of all organs for transplantations around the world since 2000.

He went on to say that several physicians were even promoted to generals in the military for their achievement in this industry.

Since the Chinese Military General Logistics Department began to provide fresh organs on demand in 2000, hundreds of Chinese hospitals, both military and civilian, jumped into the transplantation business to make a profit; even some small or specialized hospitals began to do organ transplants.

On its website in September, 2014, the World Organization to Investigate the Persecution of Falun Gong identified 231 hospitals and 2007 physicians in mainland China that are involved in forced organ harvesting.

The Organization did further research and based on incomplete statistics from published medical research papers and journals, numbers publicized on hospital websites, it estimates that more than 800 hospitals in China have organ transplantation facilities and completed 160,000 kidney transplantations, 36,000 liver transplantations and 120,000 cornea transplantations.

Surgeon and director of the Urology Department of the General Hospital of Jinan Military Region, Li Xiangtie, led the department to set a record of completing 16 kidney transplantations in 24 hours.

Shanghai Changzheng Hospital, attached to the Second Military Medical University, claimed it did 120 liver transplants for patients with severe hepatitis between 2003 and 2006. It went on to claim that the fastest matching liver was found in merely four hours after the patient entered the hospital.

The hospitals involved in organ harvesting have made a huge bloody profit.

Named as the “Military Organ Transplantation Center” by the General Logistics Department of the Ministry of Health, Number 309 Hospital saw its organ transplantation center surge in revenue from 30 million Chinese yuan in 2006 to 230 million yuan in 2010.

Daping Hospital, attached to the Third Military Medical University, saw organ transplantation revenue increase by 25 times in 10 years from 36 million yuan in 1999, to 900 million in 2009.

On December, 12, 2013, the European Parliament passed an urgent resolution calling on the Communist regime to “immediately stop organ harvesting from prisoners of conscience, religion and minority groups.”

Member of European Parliament Leonidas Donskis said, “We can't ignore that fact that human lives are used as raw materials for organ transplantation or organ harvesting in 21st century. It is unheard of since World War II and the Nazis. We absolutely won't tolerate such an evil deed.”