(Minghui.org) “Falun Gong is great. You can see their information everywhere,” said a Chinese tourist while reading banners near the Seoul Sajikdan in South Korea.

The Seoul Sajikdan is a major destination for Chinese tourists visiting South Korea. There are many shops and restaurants in the area, also frequented by visitors from China. Falun Gong practitioners take the opportunity to display posters and banners and distribute informational materials, to introduce Falun Gong and raise awareness of the persecution by the Chinese Communist Party (CCP). 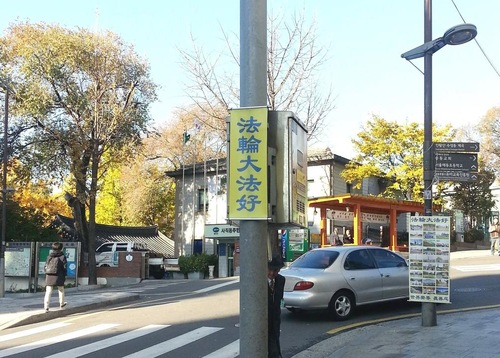 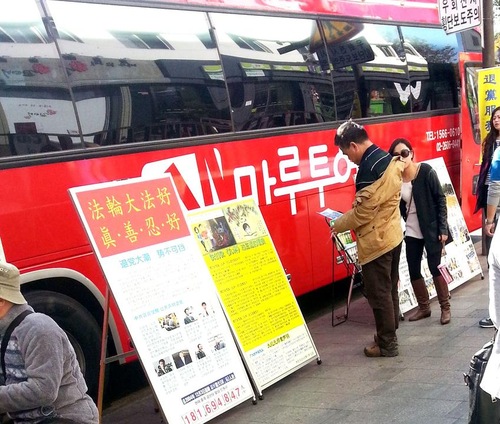 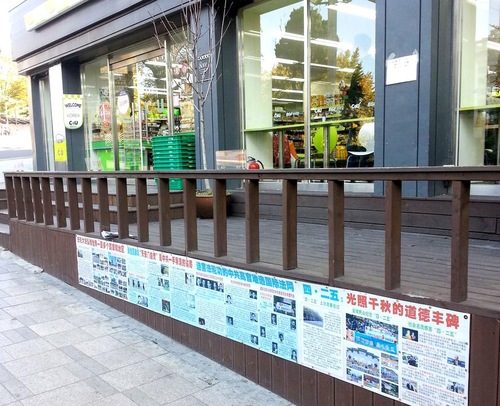 A local practitioner explained, “When we first started coming here to clarify the truth, many people were misled by the CCP's lies and tried to interfere with our efforts. Some restaurant managers even called the police to stop us. The police would not allow us to talk to the tourists. We practitioners simply distributed newspapers that explained the facts. Some Chinese tourists got angry at us, and one of them even hit a female practitioners with newspapers. However, we did not retaliate and neither did we yield.

“The situation has gradually changed. Now, Chinese tourists are moved by our activities and make a point to read our newspapers. The police have been very supportive after they learned the facts about Falun Gong. Restaurant managers no longer interfere with us and other vendors also understand us. When all the tourists leave in the evening, we practitioners use our dinnertime to clean the streets. People acknowledge, 'You work hard.'”

One woman from Dandong, Liaoning Province, China said excitedly, “I got an amulet from a Falun Gong practitioner and I read the words on it frequently. As a result, my neurasthenia has disappeared and I have become healthy. My whole family is witness to this.”

A woman from South China said tearfully, “I saw my parents handcuffed with their arms behind their backs when I was very young. The Communist Party beat them to death.” She was delighted to hear that the Party would collapse and she withdrew her membership in the Young Pioneers, a CCP affiliate for children.

Due to practitioners' ongoing efforts day in and day out, more and more people are coming to know and support Falun Gong.

“China Fahui | From a “Weirdo” to a Falun Dafa Practitioner”