(Minghui.org) At one of Sydney's major tourist sites known as Mrs. Macquarie's Chair, Falun Dafa practitioners have persistently raised awareness about the ongoing persecution of Falun Dafa in China.

The sandstone bench, carved by convicts in 1810, is situated at a scenic spot near the Royal Botanic Gardens, and overlooks Sydney Harbour. Below are some accounts of Chinese people declaring their withdrawals from the Chinese Communist Party (CCP) at Mrs. Macquarie's Chair. 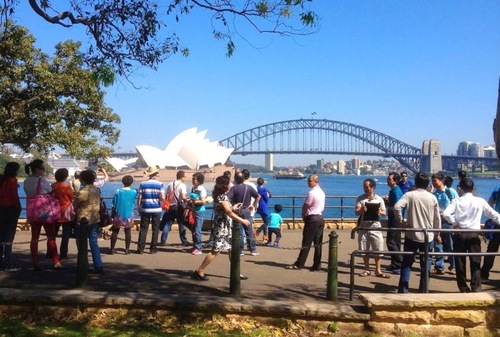 Chinese tourists taking in the view of Sydney Harbour at Mrs. Macquarie's Chair

Ms. Man, a long-term volunteer of seven years at the site, said that 60 to 70 percent of the tourists at Mrs. Macquarie's Chair are Chinese.

“We initially faced numerous Chinese tourists who had been filled with hate propaganda against Falun Dafa. Some of these tourists even cursed at us. After many years of painstaking and persistent efforts to clarify the truth to these Chinese people, we have now seen the changes in them. Some Chinese tourists show their support by encouraging us, and some have even shouted, 'Falun Dafa is great!' when they see us. Also noteworthy is the sheer number of Chinese who have heard of the Quitting-the-CCP movement.” 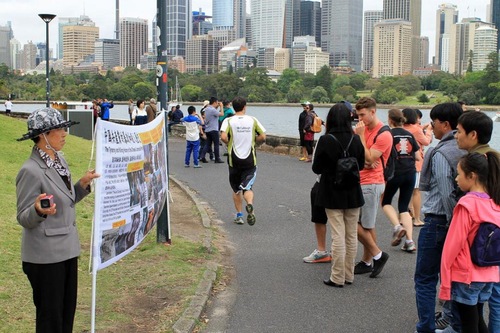 Ms. Zhang, another Falun Dafa practitioner, commented, “Some Chinese quit the CCP after reading our information.” Occasionally Ms. Zhang meets Chinese people who are initially hostile toward her, repeating the propaganda spread by the state-controlled media of China. However, as long as such people are willing to listen to her, she can convince them to see through the Chinese media's lies with facts and moral reasoning.

“One day, two Chinese men asked me, 'How much are you getting paid?' I asked them instead, 'We haven't asked you for anything. We are working for your right to know the truth. How much do you pay us? We dedicate our time and energy for you because we cultivate Truthfulness-Compassion-Forbearance. If it's just about money, who would do this work?' After these guys heard what I had to say about the CCP's crimes against humanity, they all announced their immediate withdrawals from the CCP. They even thanked me before leaving.”

The misunderstandings many Chinese people have towards Falun Dafa are a result of the CCP's mass campaign to smear the reputation of Falun Dafa through the Chinese media.

About 90,000 Chinese per day are dissociating themselves from the CCP, according to the Global Service Center for Quitting the CCP. The movement began in 2004 with the publication of the Nine Commentaries on the Communist Party, which some U.S. Legislators have described as being as influential as the book Common Sense to the American struggle for independence.

Compassion is the Language of the Heart

Falun Dafa practitioner Ms. Yang warmly greets Chinese tourists and takes their photos for them. She chats with them like friends, tells them the facts about Falun Dafa, and advises them to stay away from the CCP. She thinks people deserve the right to know just how malicious the CCP is.

“Those Chinese who've been deceived by the CCP are pitiable, but they don't even know it themselves. Worse yet, many will meet with the same retribution as the CCP in the future for taking part in the heinous crimes,” she shared.

Ms. Yang does her best to clarify the facts to Chinese tourists.

She said, “First of all, I don't want to scare them away or make them nervous. They've lived under communism for a long time. While taking photos for them I'll tell them that this side of town is a good neighborhood. Some of the houses used to be worth 2 million dollars.

“Due to the influx of corrupt Chinese officials, however, the real estate here has been bumped up to 7 million dollars. They're all fleeing China knowing that the regime over there is done for. For us common folks, we need to consider our futures as well. The Chinese regime has killed more than 80 million Chinese people, and it's going to be held accountable for that, and that includes all those who are a part of it. How about I help you quit the Chinese communist organizations using an alias?”

Touched by Ms. Yang's sincerity, many Chinese tourists agreed to renounce their memberships in CCP organizations.

Despite being given the cold shoulder, and despite being attacked with insults, Chinese Falun Dafa practitioners have maintained the firm belief that their fellow countrymen have been deceived, and feel an obligation to inform them of the truth.

“Persecution of Falun Gong a Major Concern for China—Reported Prior to G20 Summit in Brisbane, Australia (Photos)”