The Chinese characters were from Zhuan Falun and can be translated as, “The Buddha-light illuminates everywhere and rectifies all abnormalities.” After forming the image of a heavenly maiden, the practitioners did the five Falun Dafa exercises.

Tourists from China were among many who were particularly drawn to this activity. Unlike mainland China, Taiwan allows for freedom of information, and hence Chinese tourists eagerly read and took photos of the information about Falun Dafa positioned beside the formation.

Upon learning the facts of the persecution, some Chinese tourists made the decision right there to denounce their CCP (Chinese Communist Party) organization memberships. 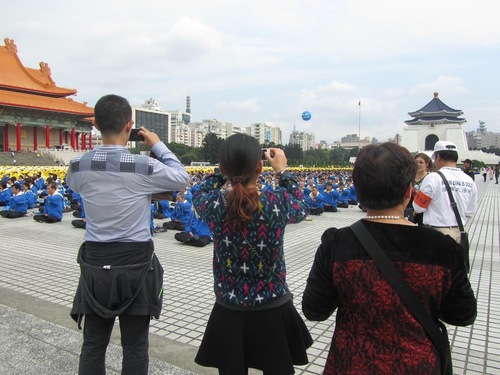 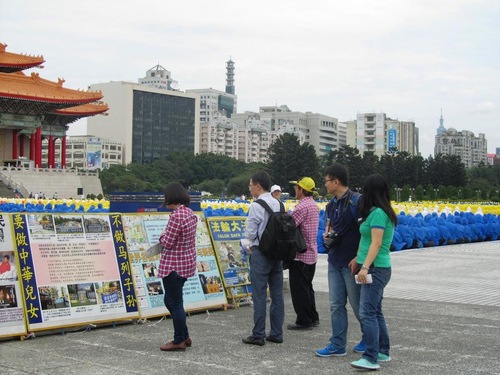 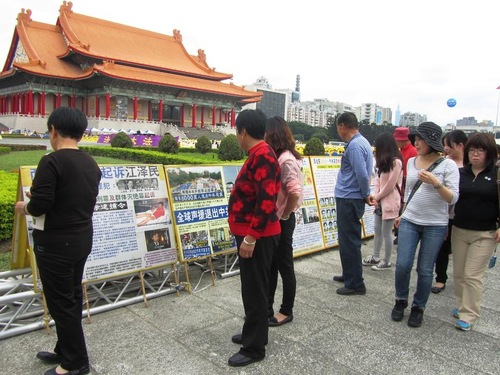 Tourists and passersby read about the persecution of Falun Gong on the display boards at Liberty Square, Taipei.

A group of more than 20 tourists from China came by. A couple of them told a practitioner that everyone in the tour group had quit the CCP and its affiliates at the previous tourist site, where they had met other practitioners.

It was their last day in Taiwan before returning home, and the whole group intended to stay at Liberty Square until the activity was over; it was something impossible to see in China.

Ms. Chen from Henan Province told a practitioner that she had been suspicious about the CCP's propaganda related to Falun Gong. This was the first time she had heard about organ harvesting from living practitioners.

Infuriated, she said, “When such solid evidence was presented to me, I just couldn't believe it, I was so shocked.” She was glad that she had already quit the CCP: “I did that in China. A Falun Gong practitioner called me at home and explained to me why I should do it. You have done a magnificent job!”

Freedom to Quit the CCP

Three Chinese women from Xinjiang Autonomous Region were initially afraid to be noticed standing near the Falun Gong information. They still, however, lingered around a Falun Gong practitioner who was helping Chinese quit the CCP. The practitioner reminded them that Taiwan was a democracy and that the Chinese regime had no control over them there. “If you miss this opportunity, there might not be another.”

Two women from Beijing pointed at the formation and told a practitioner that they knew practitioners in China used to be able to do that in public before the persecution.

They were glad to finally see it again in Taiwan. They asked many questions about Falun Dafa's popularity in Taiwan and the rest of the world before heading to a higher spot to get a bird's eye view of the formation.

Two women from Nanjing pointed at a display board and asked about the formation in 2010 when 5,000 practitioners formed a giant lotus flower and the Chinese characters for Truthfulness-Compassion-Forbearance.

They were in awe to learn that Taiwanese practitioners get together to form a new image every year.

“Mr. Zheng Guolin Passes Away after Being Imprisoned for 3 1/2 Years”