(Minghui.org) Today's news from China includes persecution that took place in 14 cities or counties in 10 provinces. According to this report, 12 practitioners were subjected to mistreatment during detention, at least 18 practitioners were illegally arrested. 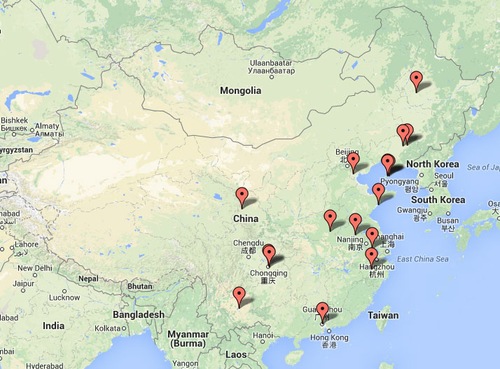 Mr. Zhao Yujie, 39, who works in a branch office of Life Guide Advertising Company, went out on business on the morning of September 5, 2014. Officers from the Linxia Police Department and the Chengbei Police Station arrested him, injuring his neck and wrist in the process. Mr. Zhao was released that evening.

Ms. Dong Zhuying, Ms. Duan Xuying, Ms. Wu Lanying, and Ms. Wang were arrested for giving people Shen Yun DVDs on October 21, 2014. Their homes were ransacked the next day. They are being held at the Xishan District Detention Center.

Mr. Liu Yongwen was sentenced to four years in prison at the end of September 2014.

Mr. Wang Zhibiao was arrested at home by officers from the Ranghulu Police Department on October 24, 2014.

Ms. Yang Jing was arrested at work on August 26, 2014. Her home was ransacked. The police confiscated one copy machine. Ms. Yang is being held at the Zhumadian Detention Center.

Mr. Xu Guangzhu from Liangjiadian Town, Dalian, was taken to the Liangjiadian Police Station and his home was ransacked on October 17, 2014.

10. [Liyang, Jiangsu Province] Ms. Huang Wenqin Passed Away as a Result of Persecution

Ms. Huang Wenqin, a doctor at Qing'an Hospital in Liyang, was arrested on November 8, 2013, and sentenced by the Liyang Court on April 4, 2014. Her abuse in detention resulted in uremia, acute cardiac insufficiency, severe anemia, and a lung infection. Near death, Ms. Huang was released. She passed away at 2 p.m. on October 22, 2014.

Mr. Liu Dalian and his wife Xiao Hu from the Zhongshan District were arrested at home by officers from the Haijun Plaza Police Station on the morning of October 17, 2014. The police took their computer and cell phone. The couple was released that afternoon, but now plainclothes officers follow and watch them whenever they go out.

Ms. Yu Jili, 70, went to the Qingyunqiao Morning Market on Xiqing Road and distributed desk calendars with information about Falun Gong on October 27, 2014. She was reported to the police and arrested.

Ms. Liu Chengbi from the Jiangbei District was arrested by two plainclothes officers and taken to the Fuling Resort on the afternoon of October 26, 2014. She was released the next day.

Officers from the Daqinglu Police Station deceived Ms. Gong Baomei into coming to the police station on October 10, 2014. Ms. Gong was held there and her home was ransacked that afternoon. The police confiscated her computer, printer, and other items. Ms. Gong is being held at the Chuzhou Detention Center.

Ms. Shao Xiaoshan was arrested on the night of October 24, 2014. She is being held at a detention center.

Ms. Liu Junling was taken away from her home by officers from the Gaoxinyuan District Police Station on October 22, 2014. Her whereabouts is unknown.

Ms. Cao Yunbi, 67, was reported to the police when she talked to people about Falun Gong on October 26, 2014. She was arrested by the local police and released that night.