15 Years of Brutality: A Look at 445 Confirmed Beating Deaths of Falun Gong Practitioners

(Minghui.org) Mr. Xuan Chengxi (玄成喜), a 61-year-old farmer from Shandong, was beaten to death a few hours after he was arrested on October 12, 2000. At the Yuhe County government building, 610 Office personnel and police officers took turns beating him. When Mr. Xuan lost consciousness, they poured cold water on him to wake him up before continuing to beat him until he passed away. 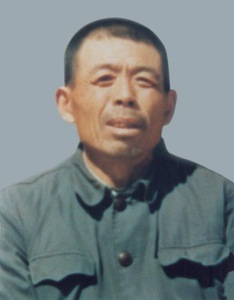 Without notifying his family, officials cremated his body. They then told his family that he died from a heart attack and accused him of “colluding with overseas influences and intending to overthrow the government.”

A 19-year-old Jilin practitioner, Ms. Zhao Jing (赵静), was arrested on November 23, 2000 on her way to Beijing to petition the government to stop persecuting Falun Gong. She died soon after being beaten at a detention center.

According to a report by Radio Free Asia, her father “saw many marks of beatings on her body. The local police hurried to cremate her body on the same day and gave him no chance to photograph the body.” Her family later told Minghui that they found two strands of metal wire in her cremated ashes. 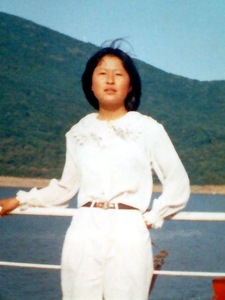 Another practitioner beaten to death at the age of 19, Ms. Chu Congrui (初丛锐), was arrested on December 1, 2000 at Tiananmen Square for protesting the persecution. She died 12 days later at Haidian Prison in Beijing. Her face was deformed, and her body was bloody all over. 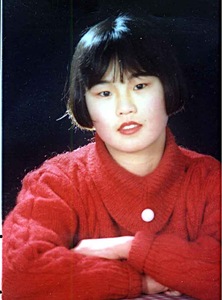 Above are three of the 445 Falun Gong practitioners beaten to death for their beliefs in the past 15 years. Deaths from beatings account for 11.7% of the total 3,795 confirmed deaths in the persecution so far.

Falun Gong practitioners have been killed every month since the Communist regime started the persecution on July 20, 1999.

To force practitioners to renounce Falun Gong, the authorities often apply multiple forms of torture at the same time, including beatings, shocking with electric batons, forced-feeding, hanging by the wrists, sleep deprivation, and others. The focus of this article, however, are practitioners who were beaten to death, with either bare hands or tools, including many everyday objects.

Except for 3 of the 445 practitioners, we have location data showing where exactly the beatings took place.

Out of the 442 cases with known location data, 419 practitioners were beaten during arrest or while incarcerated in police stations, detention centers, labor camps, prisons, brainwashing centers, and other extralegal detention facilities.

Many practitioners died while still in custody. For example, among the 109 practitioners beaten at police stations, 77 (70.6%) died before their release.

In aggregate, 51% of the 445 practitioners died while in police custody. 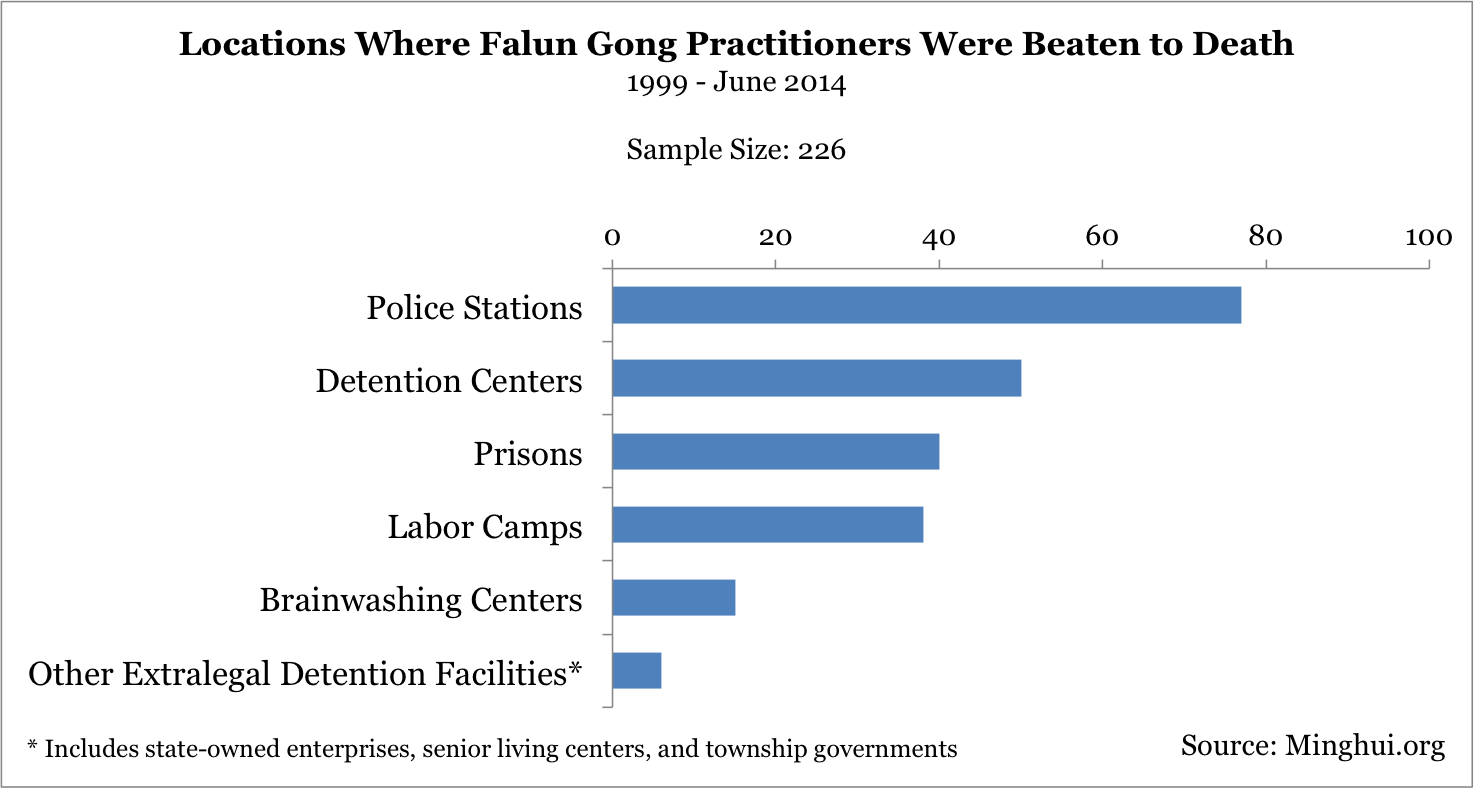 Among the 445 practitioners beaten to death, the average age was 48. 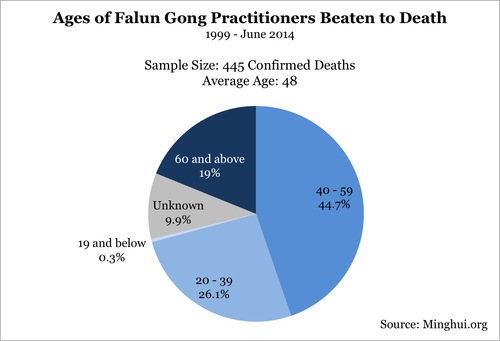 The five provinces with the highest beating death counts are Shandong, Hebei, Liaoning, Heilongjiang and Jilin, all of which are in northeastern China. 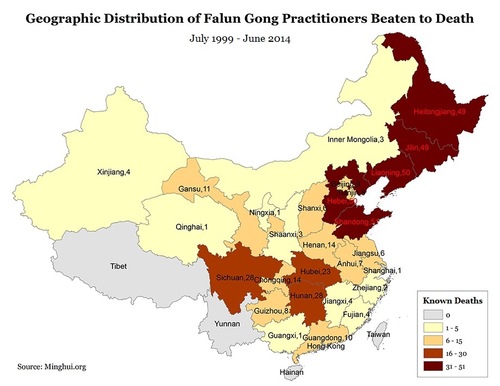 Mr. Li Zaiji (李再亟), 44, was the first practitioner beaten to death in Jilin City, Jilin Province. He was arrested on his way to Beijing to petition the government in 1999. Without due process, police sentenced him to one year of forced labor. He died on July 8, 2000. According to his family, his back was black and purple, and his left temple was sunken in. One of his eyeballs appeared to have been pushed back into its socket and held in place with gauze. [1] 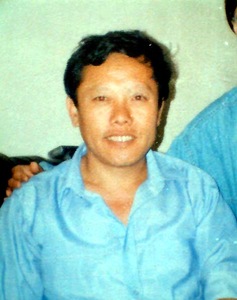 Mr. Wang Bin (王斌), 47, a computer engineer, was beaten by four inmates for nearly an hour at Dongfeng Forced Labor Camp in Daqing, Heilongjiang Province on September 27, 2000. Blood vessels in his neck ruptured. He had several bone fractures, and his body was covered in bruises. He passed away on October 4 after a heart failure. [2]

Mr. Zou Wenzhi (邹文志) died at the age of 54 after he was beaten by police officers and security personnel at his workplace on October 16, 2000. His body was covered with bruises and injuries. The medical examiner confirmed that his spine was broken and that he had severe damage to internal organs, including his heart. [3] 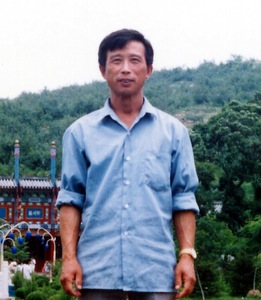 Following his arrest in January 2001, Mr. Chen Guibin (陈桂彬), 35, was taken to the security office at his workplace and savagely beaten by four security guards. Two bones in his neck were broken, and his body became paralyzed. After the beating, the guards threw him outside into the snow for more than an hour.

When he was eventually sent to the hospital, it was too late: he had difficulty breathing, and was suffering from dehydration and an inability to urinate. In extreme pain, he passed away on February 7, 2001. [4] 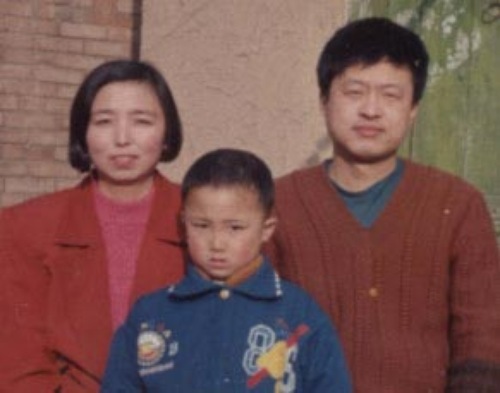 Mr. He Xingzong Beaten to Death on the Street

Mr. He Xingzong (何行宗), 55, was confronted by police on December 8, 2001 while posting fliers about the persecution of Falun Gong. When he refused to comply with their demands, the officers beat him to death on the spot. The medical examiner concluded that his death was the result of an “accident.” However, while preparing for his funeral, his family found that there were two deep hand prints on his neck, the back of his head was severely injured, and his testicles were crushed. [5] 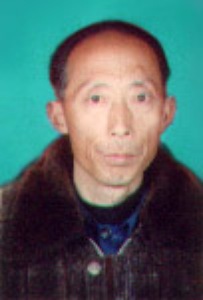 At Shuangkou Forced Labor Camp in Tianjin, Mr. Chen Baoliang (陈宝亮), 66, was beaten to death for criticizing the guards for torturing other practitioners. The guards threw him to the ground, jumped up, and stomped on his body. After half an hour of this abuse, Mr. Chen collapsed and passed away within minutes.