Handcuffs Used as Form of Torture against Female Teacher

(Minghui.org) Handcuffs are supposed to be used by police to temporarily restrain a suspect, not a form of physical abuse. However, a detention center in China has turned handcuffs into a tool to torture Falun Gong practitioners for refusing to renounce their belief.

Ms. Zhang Xiaojie, a 46-year-old university lecturer who has been incarcerated at Qinhuangdao First Detention Center since June last year, has experienced severe abuse at the detention center.

Ms. Zhang was handcuffed for extended periods of time on three occasions from December 2013 to September of this year.

The guards cuffed her hands to a pole in the hallway for 15 straight days last December after she exposed the poor living conditions at the detention center on a survey. 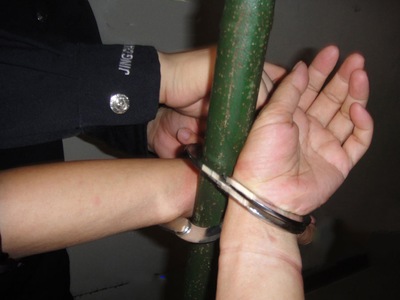 Torture Re-enactment: Handcuffed to a pole

Ms. Zhang had her hands cuffed to a pole again for two weeks on July 3 and September 3 of this year. Both times she was being punished because she refused to answer roll call, as a form of protest.

The detention center authorities turned a deaf ear when Ms. Zhang’s lawyer filed a complaint against the physical abuse. An inspector from the procuratorate was rendered speechless when Ms. Zhang pointed out the illegality of the abuse she experienced. However, he did nothing to stop the continuing physical abuse of practitioners for upholding their belief in Falun Gong.

“A Beacon of Light in a Dark Night”