(Minghui.org) Taiwanese Falun Gong practitioners make a special effort to welcome Chinese visitors every day to the Cihu Mausoleum in Taoyuan County, Taiwan. Also known as the Mausoleum of the Late President Lord Chiang, the site is one of the most popular tourist destinations for visitors from mainland China. The national landmark is located near a secluded lake and surrounded by stunning scenery.

Because the great popularity of this site offers a special opportunity to meet visitors from the mainland, practitioners make a concerted effort to talk to them and help them quit the Chinese Communist Party (CCP) and its affiliated organizations. 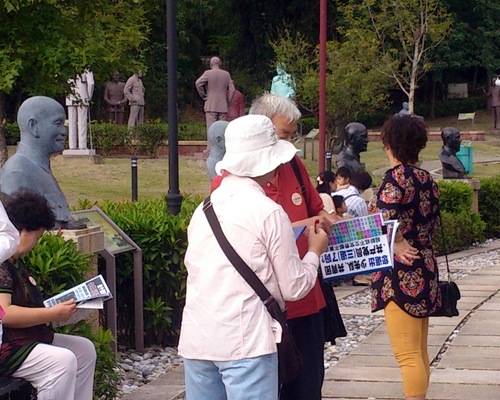 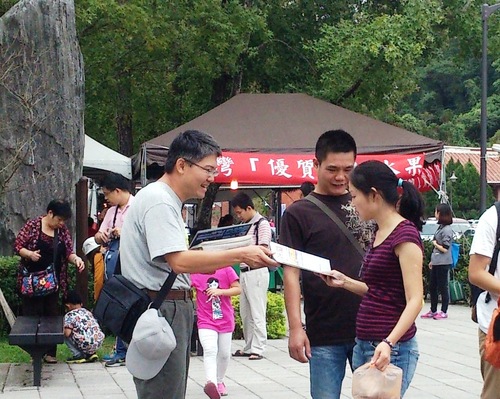 Practitioners hand out fliers to passersby at the Cihu Mausoleum.

The practitioners who go to the Cihu Mausoleum are of differing ages and backgrounds, but each has had a number of special experiences as they reach out to their Chinese neighbors.

Elderly Practitioner Clarifies the Facts, Regardless of the Weather

Ms. Fan, from Hsinchu County, Taiwan, has been practicing Falun Gong for over seven years. Ten months ago, she started to go to the Cihu Mausoleum to raise awareness about the CCP's persecution of Falun Gong.

Although she is 75 years old, Ms. Fan never complains about inclement weather, nor about the almost five-hour daily bus ride to and from the mausoleum. For her, clarifying the facts to Chinese tourists means much more than her personal comfort.

Even a typhoon did not stop Ms. Fan from going to the mausoleum. “Somebody has to explain the facts to these Chinese tourists,” she said. “It's such a rare opportunity for them to come to Cihu. If they returned to China without having learned the truth, it would be truly regrettable!”

Although the typhoon dumped over a foot of water on the mausoleum's parking lot, a number of tourists still showed up. “I'm so glad I went!” enthused Ms. Fan. “I wanted these people to experience the kindness of Dafa.”

“Being part of the CCP isn’t your fault,” she tells the Chinese tourists. “However, it is your choice to quit or not.”

Sometimes, Ms. Fan calmly practices the Dafa exercises near the mausoleum and then talks to passersby about Falun Gong and why it's important for them to quit the Party. Her compassion and warmth have encouraged many Chinese visitors to withdraw from the Communist regime.

We Must Take Every Opportunity to Save Predestined Beings

Dafa practitioner Yuxia initially didn't feel comfortable talking to mainland tourists about quitting the CCP, but she soon realized that if she didn’t talk to these people, many of them would miss the opportunity to be saved.

One morning, she told a tourist, “People who withdraw from the Party will enjoy a good future.” The woman replied, “I’m a kindhearted person; whatever bad deeds the CCP has done has nothing to do with me.”

Yuxia asked, “Did you know that the CCP is persecuting a group of kindhearted people just like you, and even harvesting their organs?” The woman seemed surprised, “Really? I had no idea this was going on.” Yuxia handed her a brochure and the woman thanked her.

That afternoon, Yuxia noticed a group of Chinese tourists busily preparing for their flight back to China. She recognized the woman whom she had spoken to earlier, and both were delighted to see each other.

Afterward, Yuxia was upset with herself for not taking the initiative to ask the woman to withdraw from the CCP. As a result, she could not sleep for several nights.

Since that day, Yuxia has made it a point to not let predestined people miss the opportunity to be saved. “No matter what, I have to take the initiative to compassionately talk to and encourage people to withdraw from the CCP,” she said.

Within just one month, Yuxia went from encouraging about six people a day to quit the CCP, to about 55 to 60 people a day. So far, she has helped over 2,500 people renounce their membership in the Communist Party and its affiliated organizations.

Despite Declaring His Loyalty to the Party, Chinese Tourist Quits the CCP

Mr. Deng, also a Falun Gong practitioner, was deeply inspired when he heard that some Taiwanese practitioners traveled seven hours to Eluanbi City in Pingtung County to help clarify the truth to the Chinese tourists. He now travels an hour each day during his summer breaks, to help people withdraw from the Party. On a typical day, Mr. Deng helps about 55 people renounce the Party.

“I treat the Chinese tourists as friends,” explained Mr. Deng. “I greet them, ask them where they're from, and then share my views about Taiwan. After a short while, we become well acquainted.”

One morning, as Mr. Deng tried to encourage a Chinese tourist to renounce the CCP, the man suddenly shouted, “I don’t want to talk about this subject. Quitting the Party is betraying China. How could I do such a thing?”

Later, Mr Deng noticed that this tourist was walking alone. As he approached the man, the man turned around and grasped Mr. Deng's hand, saying, “You are such a kind person!” Mr. Deng realized that this was a sign that he wanted to renounce the CCP.

“Shall I give you a pseudonym and help you withdraw from the CCP?” Mr. Deng asked. The tourist nodded. Mr. Deng then realized that the tourist had earlier feigned his loyalty to the Party only because his colleagues were present.

Ms. Huang, a primary school teacher and Dafa practitioner, recounted, “Some tourists come to Taiwan not only to quit the CCP, but also to learn more about Falun Gong.”

She recalled one evening when two packed tour buses pulled into Cihu. It was the last stop on their trip. When they spotted Ms. Huang doing the Dafa exercises, one tourist asked, “Are you practicing Yoga?” Another practitioner standing nearby replied, “No, she's practicing Falun Gong.”

The tourist looked at Ms. Huang, with admiration on their faces. A practitioner brought over two informational display boards for them to read: one about the lawsuit in Spain against Jiang Zemin and four other perpetrators of the persecution; and the other about the worldwide spread of Falun Gong.

When the tourist asked what Falun Gong's main tenets are, the practitioner directed her to a number of bookstores where she could buy Zhuan Falun, the main book of Falun Gong. The tourist was interested to know more about the practice.

A practitioner then began reciting “Lunyu,” to her. The woman listened very attentively. Before she left, the practitioner asked if she wanted to quit the CCP and she nodded in agreement.

Helping a Christian Renounce the CCP

Mr. Liu shared his experience about explaining the facts to a Christian visitor from the mainland. On September 28, he sat next to a Chinese tourist who had been sitting alone. “How long have you been here?” Mr. Liu asked. The man made a hand gesture to show that he had been there for six hours. “In Taiwan, the hand gesture for six is like this,” Mr Liu explained, while demonstrating the hand position.

As they chatted, Mr. Liu handed some informational materials to the tourist. The man instantly put his guard up, “I believe in God!” Mr. Liu started to talk about the satanical nature of Marxism, but the man refused to listen and instead, accused Mr. Liu of preaching to him.

The two men talked further and when Mr. Liu spoke about how the Romans had persecuted the early Christians, the man slowly began to show interest. Shortly after, the man understood the facts and asked Mr. Liu to help him renounce the CCP.

Tour Guide: “I Renounced the Party a Long Time Ago”

Many tour guides have also quit the Party. Ms. Huang talked to one of them who told her that he'd brought more than one hundred groups to the Cihu Mausoleum. She asked him, “Have you quit the CCP?” He replied, “I quit a long time ago; on my third trip here.”

“Whenever you have the chance, you should tell your tour group the facts,” Ms. Huang suggested.

Two days later, Ms. Huang spoke to a tour guide who initially refused to quit the CCP. But after Ms Huang told him about how the previous tour guide had withdrawn from the Party, he said that he wanted to quit, too.

“Dismantling the Mountain of Notions”