(Minghui.org) Several young practitioners shared at the 2014 Australia Falun Dafa Cultivation Experience Sharing Conference on September 29. Their sharing encouraged others, young and old. The conference, held at the University of New South Wales, was attended by over a thousand practitioners. 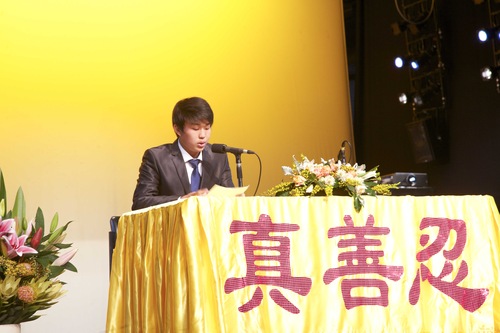 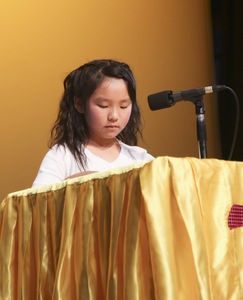 Two sisters aged six and seven started practicing Falun Dafa four years ago when they enrolled in their local Minghui school. They learned to recite poems from Hong Yin there.

They shared how they overcame laziness to wake up at five o'clock in the morning to practice the Falun Dafa exercises. The older sister shared how she let go of the attachment of jealousy after reading the book Zhuan Falun.

Her younger sister elaborated on how she let go of the attachment of greed and pursuing happiness, and how they participated in truth-clarification activities. They also showed a Shen Yun album to their classmates and collected signatures for a petition that condemns the persecution in China.

A Boy Calls China to Clarify the Truth

A young boy named Mingzhen shared his experiences making phone calls to mainland China to persuade people to quit the Chinese Communist Party. He has been making the calls since he moved to Australia two years ago.

He recounted, “For a period of time, I made phone calls to China after school every day. The experience calling China helped me get rid of fear.”

At school, he collected signatures for a petition condemning the persecution of Falun Gong in China and gave DVDs introducing Shen Yun to his teachers and friends. His English skills improved quickly in a short period of time.

He encountered challenges and tribulations but knows that Master is guiding his path, “Master always find ways to awaken me, encourage me and fill me with righteous thoughts.”

He went on to say, “My gratitude to Master is hard to put into words. Because of Master's compassionate protection, I didn't fall and become an ordinary person.”

Mingzhen found and let go of many attachments while making phone calls to save Chinese people. “I understand that the only way to advance on the path of cultivation is to fulfill one's vow and continue to call and save the Chinese people.”

Many young practitioners in the audience said the sharing resonated with them. “I read my sharing at the Fa conference last year, but I have slacked in my cultivation since then,” said Ms. Shi Hui. “Attending the Fa conference helped me to become as diligent as I was last year. We truly have to be diligent.”

A young practitioner shared that at first he thought that assisting Master in the Fa-rectification period had little to do with him because of his age. Ms. Shi said, “I had the same misconception. We must be diligent to catch up with the Fa-rectification.”

“I almost missed the Fa conference this time because the college entrance exam is only two weeks away. But now I think that attending the Fa conference was a wise decision, and I had learned a lot from fellow practitioners,” she added.

Stella realized that her cultivation status was not good enough and that she had become complacent. “I want to be as diligent as other practitioners,” she added. “The film The Eternal Story (played after the conference) was especially moving to me. I felt I was falling behind in the Fa-rectification. I have to be more diligent from now on.”

Alison believed the conference was a precious time for disciples to share their experiences. She found many places she could improve, “I want to catch up and submit a paper to the conference next year.”

She also said that she wanted to contact old friends who attended the same Minghui school as her before they went to college so she could encourage them to continue their cultivation practice. “It is such a precious and rare chance that we became Falun Dafa practitioners in the Fa-rectification period. We vowed to come here to assist Master. And we ought to return to our paradises together.”

Adult practitioners were also inspired by young practitioners' sharing. One father said, “The understandings shared by some practitioners were very clear and they certainly accomplished a lot. You see your own shortcomings by comparing yourself to them. For a young boy, calling China to clarify the truth is truly a remarkable accomplishment. It tells us that making phone calls is no longer a task just for adult practitioners. The younger ones are catching up. It is good.”

Another man was touched by the purity of the little practitioners' sharing. “They talked about their experiences and enlightenment in plain language, without showing off or trying to impress... This is the most touching part.”

Vivian was very touched by two little sisters' sharing, “They are so pure and their sharing let me realize my attachments, too, such as jealousy and laziness. They can face the attachments directly and let go of them.

“However, we, as adults, are more complex. We sometimes try to cover the attachment with some excuses. So it becomes more difficult to get rid of them. By covering up attachments, it is not our true selves that we are safeguarding.”

“My Amazing Recovery After A Car Accident”

“Tortured to Death: Our Younger Sister Gao Rongrong (Part 1 of 4)”