(Minghui.org) Today's news from China includes persecution that took place in 11 cities or counties in 8 provinces. According to this report, 2 practitioners were subjected to mistreatment during detention, at least 14 practitioners were illegally arrested. 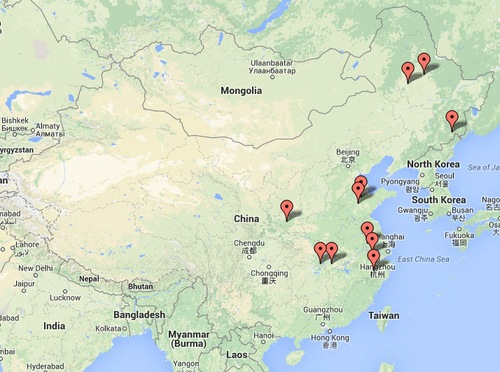 Approximately ten people from the Wucheng District 610 Office and the local neighborhood community, forcefully took Ms. Hu Zhuangnai to a brainwashing center held at the Shuanglong Hotel on the night of November 11, 2014.

The director of the Keshan Farm Police Department, Li Zhihua, and Gu Jia, chief of the Crime Investigation Team, led officers to break into the beauty salon owned by Ms. Yan Cihui on September 15, 2014. Ms. Yan and Ms. Zhou Qun were taken to the police department. Ms. Yan was released after being held for 24 hours. Ms. Zhou was transferred to the Qiqihar Detention Center.

Ms. Tang Dehang was arrested on the train to Xuancheng on March 31, 2014. She was taken to the Xuancheng Detention Center and then sentenced to three years in prison.

Mr. Li Huzhe, 50, talked to people about Falun Gong at a construction site on the morning of October 8, 2014, and was reported to police. Officers from the Xinxing Police Station and the Beishan Police Station came to the site and took him away.

Mr. Li Xiuchang was arrested by officers from the Jianshelu Police Station on October 9, 2014. The police confiscated Falun Dafa books and informational materials about Falun Gong.

Ms. Lu Zhen from Laiwu City was arrested by officers from the Daodejie Police Station in Huaiyin District, Jinan City, when she talked to people about Falun Gong and distributed Shen Yun DVDs on the morning of June 23, 2014. She was detained in the Jinan Detention Center for 15 days.

Officers from the Huanqitai County Domestic Security Division and the Qifeng Town Police Station broke into Ms. Gong Junling's home on the night of June 15, 2014. They confiscated her computer, printer, cell phone and about 1000 yuan in cash. Ms. Gong's whereabouts is unknown.

Ms. Zhang Jun was arrested and taken to the Gulou District Brainwashing Center in mid-September 2014.

Ms. Cheng Xiqing was followed and then arrested by domestic security officers when she talked to people about Falun Gong on the morning of October 13, 2014. The police grabbed her cell phone and keys. They then ransacked her home. Ms. Cheng is being held at the Hubei Provincial Brainwashing Center.

Ms. Zhao Lanqin, in her 40s, was distributing Falun Gong informational materials on October 8, 2014, and gave a copy to a plainclothes officer. She was arrested and taken to the Wujiabao Police Station in the Qindu District. Ms. Zhao was transferred to the Qindu Drug Rehabilitation Center that very night. It was said that she would be held for 15 days.