(Minghui.org) Falun Gong practitioners from across Europe converged upon Madrid, Spain, on October 3 and 4, 2014, to help raise awareness of the Chinese Communist Party's (CCP) crimes against humanity.

The practitioners held a march and rally, demonstrated the Dafa exercises, and set up informational display boards to clarify the truth to passersby.

Locals expressed their support for Falun Gong and openly condemned the Chinese regime for persecuting such a peaceful meditation group. 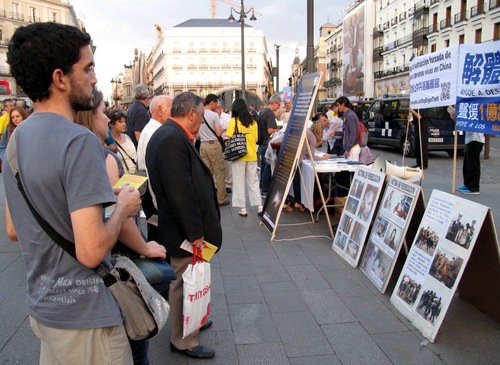 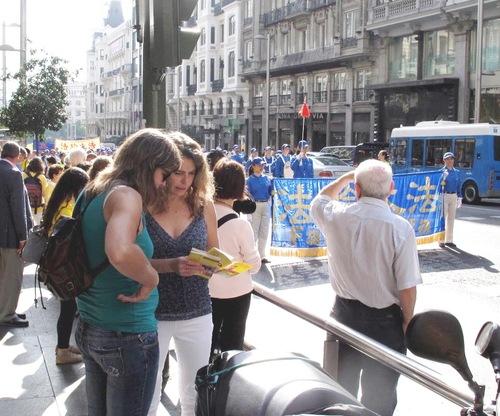 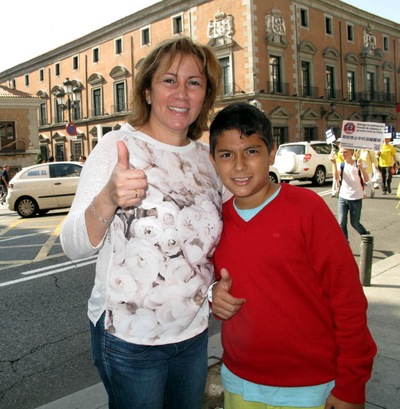 A mother and son enjoy the uplifting sounds and energy of the marching band. 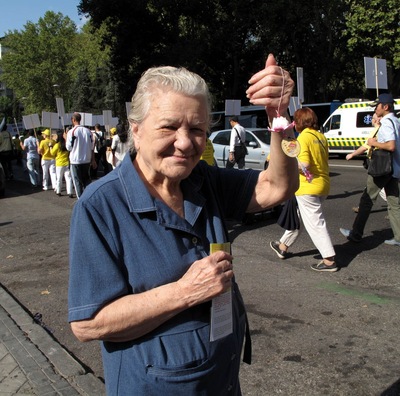 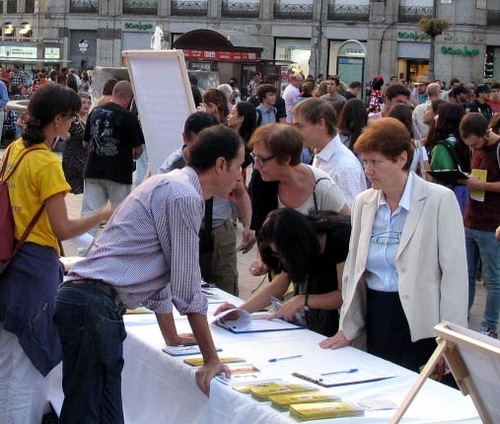 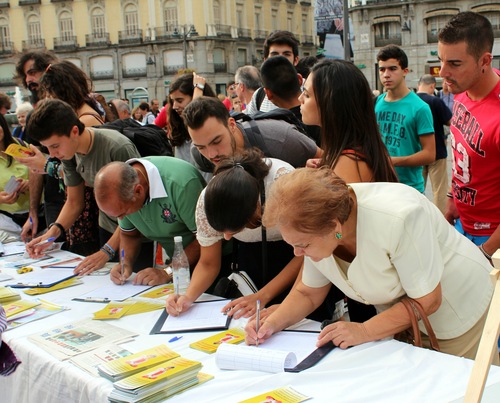 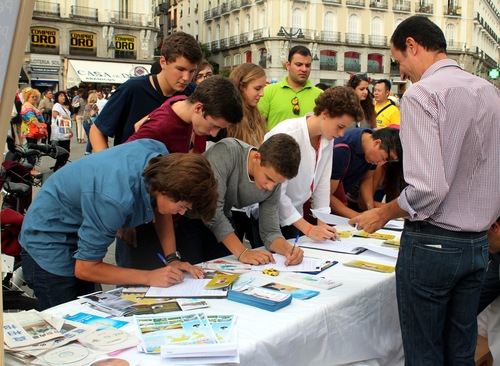 People wait their turn to sign a petition condemning the CCP's practice of live organ harvesting.

“Live Organ Harvesting Is a Crime Against Humanity!” 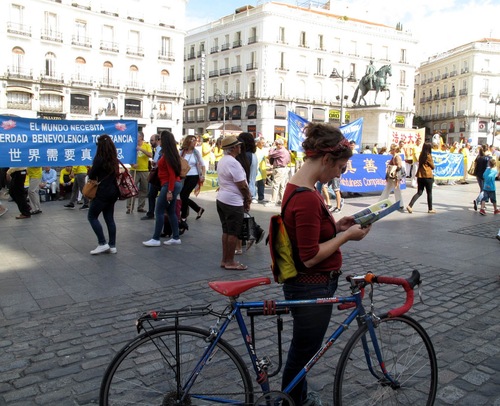 Eli, a former anthropology professor, stopped by the Falun Gong information booth on her way through Puerta del Sol. She was shocked when she heard about the live organ harvesting that's taking place in China today.

“No culture or religion should be persecuted for their beliefs,” she said. “Everyone should enjoy freedom of belief. Thanks to you, I now have a better understanding of the real situation in China.” 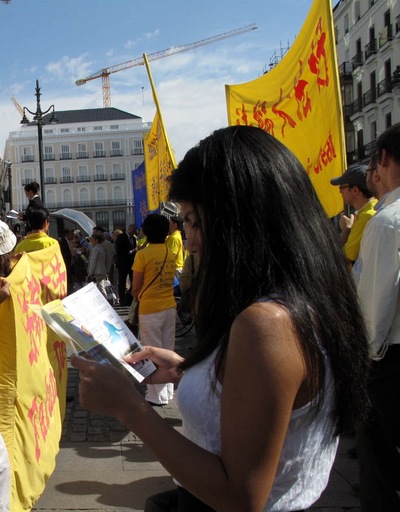 After Diana, a human rights attorney, listened to the speeches presented at the Falun Dafa rally, she was visibly shocked.

“The fact that the Chinese regime is harvesting organs from living Falun Gong practitioners is incomprehensible to me!” she exclaimed. “How can people be so indifferent to this injustice? Why aren't the different world governments trying to stop this?”

A practitioner informed Diana that independent investigators have verified the CCP's widespread practice of live organ harvesting. He told her that Spain has enacted some of the most rigorous state laws in an effort to stop this outrage in China.

Diana said that the international community has an obligation to put a stop to any and all forms of human rights violations in the world.

“The international community has helped stop human rights abuses in Libya by initiating tough international trade sanctions, so why are they allowing China to persecute people simply because of their religious beliefs? These human rights violations should matter to each one of us. Every person and every government should do their best to help.”

“We Are Extremely Shocked!" 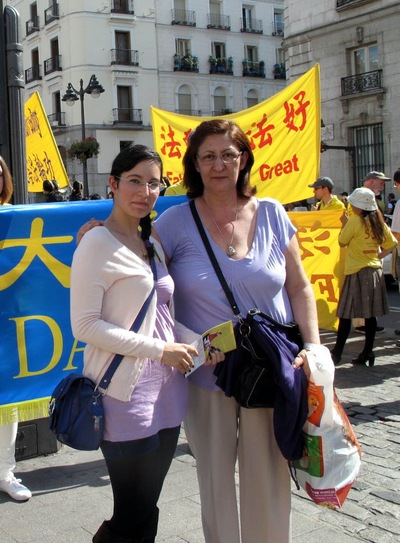 Maria and her mother attend the Falun Dafa rally.

Maria, a Spanish undergraduate art student, and her mother listened carefully to the speeches at the rally. Maria asked a practitioner for more information on Falun Gong and where she could learn the exercises.

“As a undergraduate arts student, I am very interested in Chinese arts and China,” explained Maria. “This is the first time my mother and I have heard about live organ harvesting. We are extremely shocked!”

The practitioner told her that Falun Gong is a cultivation practice of both mind and body and is based on traditional Chinese culture.

“Falun Gong teaches people to elevate their character by following the principles of Truthfulness-Compassion-Forbearance,” explained the practitioner. “Falun Gong has benefited many people around the world and has spread to over 100 countries. The CCP has sought to undermine traditional Chinese culture ever since it came to power in China in 1949.”

Maria and her mother said that they were keen on reading more about Falun Gong on the Internet.

“The Whole World Needs to Say 'No!' to This Persecution!” 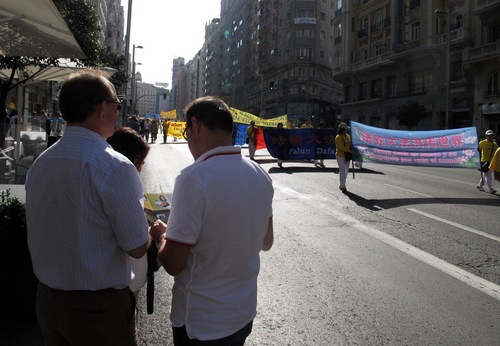 Macro and Angel read a brochure during the practitioners' march.

Macro and Angel, electrical engineers for Airbus SAS, said that they wholeheartedly supported Falun Gong and would help distribute informational fliers to their Chinese colleagues.

“We support you! Let's work together to end this persecution,” said Macro. “I wish you success! It is very important that the whole world knows about the Chinese Party's persecution of Falun Gong.

“For this to happen, people everywhere need to raise up in one great voice and condemn these crimes against humanity!”