(Minghui.org) Ms. Li Cuifang (李翠芳), 70, the owner of a shop that specializes in making burial garments, is facing an illegal trial and potential sentence due to her belief in Falun Gong. Her case was submitted to the local court on June 13, 2014.

She has been held at the Luergou Detention Center in Qinzhou District for the past nine months. With her hands and feet shackled, she was tied to a tiger bench and interrogated. 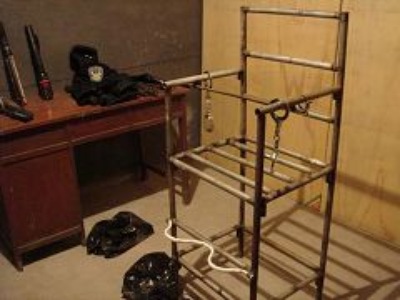 Police officers broke into Ms. Li's home at around 9 a.m. on December 28, 2013, and arrested her. They ransacked her home and confiscated pictures of the founder of Falun Gong, Dafa books, and personal belongings.

The police then went to the homes of two of Ms. Li's nieces and ransacked them. One of her nieces was taken to the police station for interrogation and forced to pay a 1,000-yuan fine. Ms. Li's shop was also ransacked and all personal items related to Falun Gong were confiscated.

Ms. Li's two nieces have been repeatedly harassed since their aunt's arrest by officers and staff from the Qinzhou Domestic Security Division, local police station, and residential committee.

The two girls were suspected of being practitioners and prodded to identify local practitioners from a list of visitors to Ms. Li's store.

Ms. Li was arrested once before, in 2001, by police officers from the Qinzhou Domestic Security Division. They ransacked her shop and confiscated Falun Gong books. She was detained for a month and released after paying a 10,000-yuan fine.

Ms. Li lives in Luoyu Community in the Qinzhou District of Tianshui City, Gansu Province. Out of curiosity, she borrowed a copy of Zhuan Falun, the main text of Falun Gong, after the persecution began in 1999 and was drawn to the practice because of its principles of Truthfulness-Compassion-Forbearance.