(Minghui.org) Ms. Shi Jinhua, a Falun Gong practitioner over 70 years old, was sentenced to a four-year prison term in Shanghai because she wrote letters exposing the persecution of Falun Gong. During her imprisonment, she was tortured in the most humiliating ways. She was tied to the death bed for 48 hours, forced to stand for as long as 30 days straight, and had her mouth stuffed with a rag used for wiping feet. 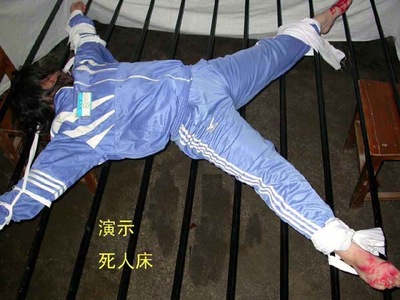 Ms. Shi Jinhua is from Hunan Province, China. Her husband died at an early age and she raised her three sons alone. From overwork and many burdens, her health soon deteriorated.

However, her illnesses disappeared after she practiced Falun Gong toward the end of 1998. From then on, she never needed medication again and was healthy and energetic.

In 2010, she visited her son in Shanghai, where she wrote several letters to people telling them about the persecution of Falun Gong. When she returned to her home in Baidishi Town, Qidong County, Hengyang City, Hunan Province, police from the Shanghai Minhang District Domestic Security Division, over 745 miles away, went to get her.

On the evening of June 2, 2010, as Ms. Shi returned home from working in the fields, several policemen lay in wait nearby. Officer Deng Changneng knocked her door down. The police ransacked her home and confiscated much of her property. They took her to the Baidishi Town Police Station. The following day she was transferred to the Qidong County Detention Center.

Transferred to Shanghai and Sentenced to Prison

On June 9, four officers from the Shanghai Zhuanqiao Police Station took Ms. Shi Jinhua to Shanghai. The next day they transferred her to the Shanghai Minhang Detention Center, where she was tortured until ulcers erupted all over her body.

Several months later, she was sentenced to four years in prison. Court officials ignored her attorney's arguments in her defense and sentenced her.

Ms. Shi's Own Account of What She Endured in Prison

Tied to the Death Bed for 48 Hours

On January 18, 2011, a snowy day, I was transferred to Shanghai Nanhui Prison. I protested my treatment and refused to wear the prison uniform because I was not a criminal. I am a practitioner and believe in the principles of Truthfulness-Compassion-Forbearance. Several condemned prisoners covered my mouth with gauze and forced me to stand in an open doorway as a cold north wind blew. This continued for several days.

I developed ulcers in the detention center that had not healed. When the guards saw me, they said I was contagious and took me to the hospital. I resisted, so they declared that I was psychotic and had to remain in the hospital. Six prisoners tied me to a death bed, and I was unable to move for two days. This was February 11, 2011, during the Chinese New Year. I almost died in there.

When the guards took me off the death bed, I wasn't able to stand on my own. I trembled all over. I felt as though I had died several times. A week later, a jail official transferred me back to the prison.

Forced to Stand for 30 Days

When I was released from the hospital, the guards claimed I had high blood pressure and had to take medicine for it. I resisted, so they forced it down my throat. Eight prisoners held me down and covered my nose and mouth. I couldn't breathe and almost choked to death. They knocked out two of my teeth, and my mouth filled with blood.

For three days and two nights, they tried to make me confess my “crimes” and write a repentance letter. I refused, as I was not guilty of any crime. I cried out for justice. For this, they forced me to stand in one position from 7 a.m. to 9 p.m., sometimes even until midnight.

If I moved even a little—if my mouth twitched or I swatted a mosquito on my face—they ordered me to stand another hour for each infraction. Several nights I was forced to stand until 3 in the morning, and then again at 7 a.m. I often fainted. I was punished like this for 10, 20, or even 30 days straight.

Once I was so tired that I closed my eyes for a few seconds at 9 p.m. while standing. A prisoner sprayed mosquito repellent into my eyes. When I asked him to stop, several prisoners pushed me down and beat me violently. They punched me in the head. I was scratched and injured everywhere. The pain lasted for several days.

On August 7, 2012—on the 30th day of standing—the guards allowed me a drink of water only once every 12 hours. It was a hot summer day, with the temperature reaching over 100°F. I could not bathe or clean my arms or even my neck, just wash my face. I was not allowed to swat mosquitoes, even if they stung me. Sweat dripped down my face. If I moved my hands or feet even a little, I was forced to stand another hour.

For several days I stood from 7 a.m. until 3 the next morning. I often fainted, but when I revived, I was made to continue standing. Prisoners took turns watching me 24 hours a day. I finally couldn't stand anymore, so I was forced to sit without moving. Again, any little movement brought more punishment.

My legs began to hurt and nothing helped. On October 9, 2013, my tormentors said that I had high blood pressure and needed to take pills three times a day. During that time, I often did the meditation secretly at night. One night, as I was sitting in meditation for less than five minutes, a prisoner on night duty saw me and reported it.

Official Yuan Yuan, eight prisoners, and two subordinate team leaders took me to the hospital. They made me sit in a wheelchair and tied up my arms and legs. I shouted, “Falun Dafa is good!” The prisoners covered my mouth and nose, and I almost suffocated.

A doctor told them that they might have killed me by treating me like that. After I was taken back to the prison, I was forced to sit still for 25 days, 14 hours a day.

One day they wrote several sentences on a piece of paper that defamed Falun Dafa and ordered me to sign it. I refused. Six prisoners seized my hand and wrote with it. I shouted, “Falun Dafa is good!” They used a rag used to wipe their feet to cover my mouth.

Every day of those four years seemed like a year. Thanks to Teacher's protection, I survived this horrific ordeal.