(Minghui.org) Today's news from China includes incidents of persecution that took place in 11 cities or counties in 5 provinces. According to this report, 9 Falun Gong practitioners were subjected to mistreatment during their detention, and at least 8 practitioners were illegally arrested. 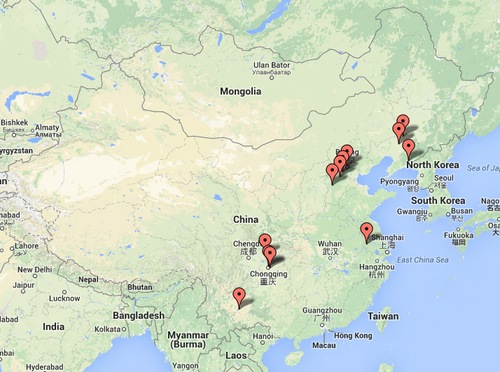 Yu Haibin, director of the the Haizhou Township Police Station, along with others, arrested Ms. Jia Shukun, Ms. Gao Gengying, and Ms. Feng Xili on the evening of August 30, 2014. Ms. Jia and Ms. Gao have been held in the Shenyang City Detention Center. Ms. Feng was released and returned home on August 31, 2014.

Director Yu Haibin and Kangping County Domestic Security Division head Zhao Hongbo planned to persecute Ms. Jia and Ms. Gao further. They handed over documents to the Kangping County Procuratorate, to be used to prosecute the two practitioners. These materials were turned down by the Procuratorate for insufficient evidence.

Ms. Wen Ling saw two police officers holding a computer coming downstairs when she came home from work on September 23, 2014. She then realized it was her computer. She followed the officers to the police station to get her computer back. The officers threatened to arrest her. She was released and returned home that day.

Mr. Zhang Liangyu, in his sixties, from the Yubei District, was arrested outside his home a little past 6:00 a.m. on September 23, 2014. He was taken to the Cizhu Town Police Station, then to a brainwashing center that afternoon. He was released on September 27, 2014.

Mr. Cui Xiaozhu, from Dongmaying Township, was arrested and taken to the Dongmaying Police Station on September 15, 2014, for distributing Falun Gong informational materials. His home was searched, and he was held at the Gaobeidian Detention Center. He has since been released and returned home.

Ms. Fu Yuerong was arrested by officers from the Zhongshanling Police Station on September 30, 2014.

Ms. He Qiqiong was arrested for delivering Shen Yun Performing Arts DVDs on September 28, 2014. She was taken to the Domestic Security Division that day. She is being held in the Panlong Distinct Detention Center.

Ms. Fu Zhongbi, 68, from the Yubei District, was arrested on August 27, 2014, for distributing Falun Gong informational materials. The police ransacked her home and took dozens of Falun Dafa books, dozens of copies of Minghui Weekly, DVDs, and a tape recorder. She is being held in the Yubei District Detention Center.

Ms. Wen was arrested on September 15, 2014, by officers from the Zhangtun Township Police Station, for distributing Falun Gong informational materials. Her home was searched, and she was taken to a detention center, but the center refused to admit her due to her having high blood pressure. The officers took her to another hospital for tests, which confirmed the high blood pressure. She was released after the police extorted 2,000 yuan from her.

Mr. Hao Shugui and his younger sister, Ms. Hao Guifeng, from Yanqingliubinbao Village, were arrested on the evening of September 29, 2014, for posting truth-clarifying stickers. The police searched Mr. Hao's home and took a copy of the book Zhuan Falun, and two brochures. Both are in the Changping Detention Center.

“Understanding Master's Words: “They will distinguish the righteous from the evil, obtain true teachings...””