(Minghui.org) Falun Gong practitioners marched from San Francisco's Japantown to City Hall as part of a series of public activities being held this week. The march began at 11:00am on Wednesday, October 15 and terminated at a rally, where speakers condemned the persecution of Falun Gong taking place in China.

After performing Falun Gong exercises as a large group at the Peace Plaza in Japantown, the procession passed by the Chinese Consulate on Geary Boulevard, turned onto Van Ness Avenue, and passed by the War Memorial Opera House before ending in front of the historic City Hall. 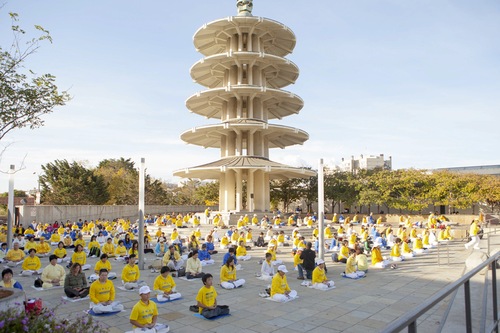 Group exercises at the Peace Plaza in Japantown 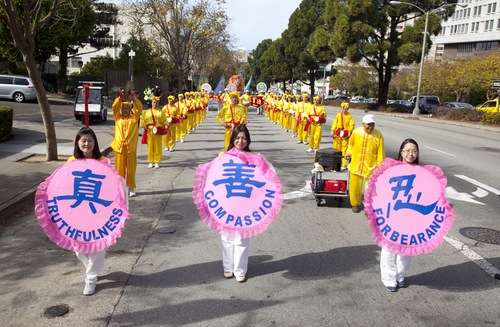 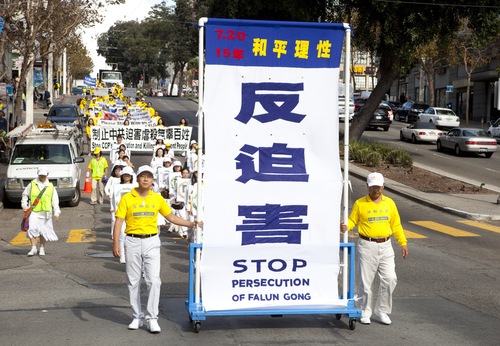 The grand march near Civic Center

At the same time, a different group of practitioners marched peacefully through the downtown business and shopping areas. Because the event was held on a weekday, it offered office workers an opportunity to learn about Falun Gong and the brutal persecution the group suffers under the Communist regime in mainland China.

A waist drum team led the march, while other practitioners demonstrated the Falun Gong exercises on a large lotus flower float. Their performances attracted large crowds of onlookers.

Gacky, a Vietnamese-American, applauded the performance. “I love Falun Gong,” she said twice, “I always support it. I know the Communist Party well. It tries to control its people and everything. It was the same in Vietnam. I support Falun Gong, and I am against the Chinese Communist Party.”

A man nearby echoed Gacky, “I have always supported Falun Gong for more than 10 years. Today is your day!”

Brian Moore, the police commander in charge of security for the march, had previously worked with Falun Gong practitioners at similar events three times. He told the Minghui reporter, “I am happy to walk with them. It feels good every time.”

A woman who works at a transplant center near the Peace Plaza says she believes reports of organ harvesting from live Falun Gong practitioners in China.

“I know that a lot of American patients go to China for organ transplants, and I knew that some of the organs are related to the suppression of the religions in China, but I didn't know that many of them are from Falun Gong practitioners,” she said, “Thank you for giving me all the information. I will learn more about it.”

One banner displayed in the march-”Stop the Communist Party Persecuting Innocent People”-drew the attention of Christina from Wisconsin, who works at a non-profit organization supporting the rights of women and children.

She asked a practitioner what Falun Gong is. When told that the march aimed not only to raise awareness of the persecution but also to support Chinese citizens who had withdrawn their membership in the Communist Party, Christina expressed gratitude for the practitioners' efforts.

Through her work, Christina became familiar with the “one child” policy, which has resulted in a great number of involuntary abortions in China. She says that the Chinese government deceives the public about such issues.

“What can you do to stop them from lying?” she asked. A practitioner replied that during the 15-year peaceful resistance, Falun Gong practitioners had exposed numerous lies made by the Chinese Communist Party and gained support from the international community. The practitioner added that the Party fears international pressure, especially the investigation into live organ harvesting that started in 2006.

“I wish you luck. You are speaking for all organizations and groups who have been suffering under the Communist Party,” Christina said.