(Minghui.org) Early morning group exercises at four locations in the city opened the Falun Dafa events in San Francisco on Wednesday. Information about the benefits of the practice and the persecution in China was visible in many parts of the city.

Practitioners from different walks of life from many regions of the United States, Canada, Asia, and Europe gathered for this annual west coast event. In sharp contrast to the persecution in China, their stories attest to the reality that “Falun Dafa Is Good.” 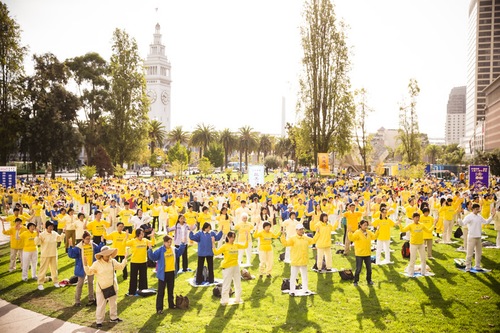 “I'm blown away by this information,” said Mark Wolf, who happened to be in front of City Hall during a rally and reading a Falun Gong flyer with great interest.

“I didn't know what Falun Gong [another name for Falun Dafa] was, and I had never heard of this organ harvesting. It is not surprising. I didn't understand the connection between the two [organ harvesting and the persecution of Falun Gong] until I read this [Falun Gong flyer],” he said.

“When there's a demand for something, people in power do crazy things to provide it at any cost, especially when there's oppression and they can do things the way they want without being held responsible for it... It's horrendous.” 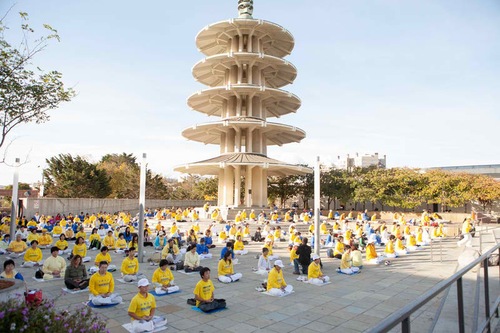 Enrique Barreto saw practitioners' banners in front of City Hall: “I know what happens in China with the Tibetan people. Now I hear about Falun Gong. I didn't know this [the persecution] was happening in China... Oppression of religions, oppression of beliefs--that's wrong, very wrong!”

“People are willing to take our materials and curious to know what the rally and march are about. A gentleman from Sacramento told me that he had been supportive of Falun Gong for over 10 years. I was very much encouraged by that,” said Angela Pan from San Francisco. 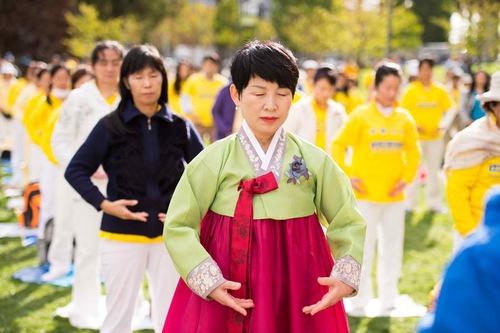 Cameron Molovinsky, a 15-year-old student from Phoenix, Arizona, came to San Francisco with his mother. He had to take three days off from the school. “I emailed my teachers: 'I want to be gone for a conference on Falun Dafa, which is a peaceful meditation practice being persecuted in China. I'm trying to raise awareness.'” He will complete the week's homework after returning home on Friday.

“My mom told me about the practice last October. I didn't believe anything like that. I believed in all the science I learned at school. I would just let her practice and stayed away from it for a long time,” he said.

“So, this summer, I read it [Zhuan Falun, the main book of Falun Gong]. By Chapter Two, I was like 'Wow, there's something more to this book.' It is not just a religion, which is what I always thought.

“I started asking my mom questions. By Chapter Six, I was certain that Falun Dafa was the right way to go. It was perfect... From the start, it was a feeling I got. I don't know what it was. But it was something.. I felt lighter. Everything was brighter. Everything was easy. Life was just easier.

“Reading it, it was not just that stuff made sense to me, but it was like... It's hard to explain. It was in my soul that I felt like, 'This has to be it. This is right.'” 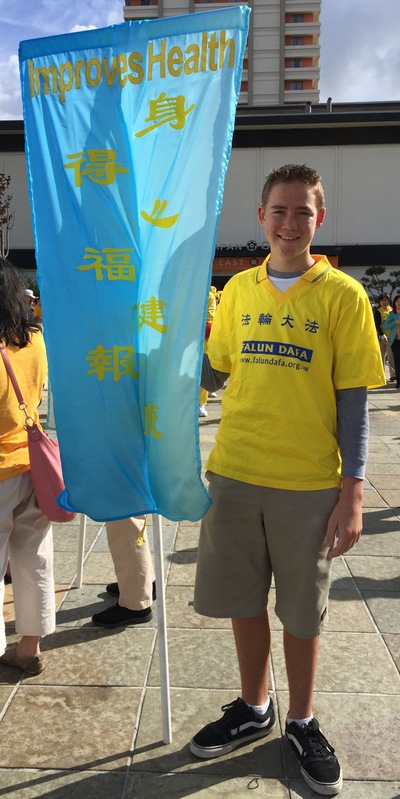 Cameron's mother Diana chimed in, “He's very good at school, very scientifically oriented. So Falun Dafa incorporates that... By Chapter Two, he came into my room, 'Mom, why, how, what?' I knew he got it.”

“School has gotten a lot easier. Personal problems are not really so important anymore. They're not something I have to worry about. I see my friends struggling with all their emotions and schoolwork. It's not a big deal for me now. I know that the number one thing is cultivation. Life is much easier without that stress,” Cameron continued. He reads Zhuan Falun at school during breaks.

He said, "It's easier to just think about cultivation, rather than just think about my own personal emotional issues. It's less stressful.'” Diana described it as a “priority shift,” which she was glad to see.

John Pruitt, a former Marine from San Diego, came across Falun Gong in 2001. A friend in the Navy knew his interest in oriental philosophies and gave him three books; one of them was Zhuan Falun.

He read Zhuan Falun last, but he knew that Falun Dafa was what he had been looking for.

“It spoke directly to my heart. It answered many questions and reiterated many of my thoughts.” John gave an example: “I knew fighting was bad and wrong. I always felt that I was losing out even though it looked like I was winning. So when I read Chapter Four, 'Transformation of Karma,' I knew then.” 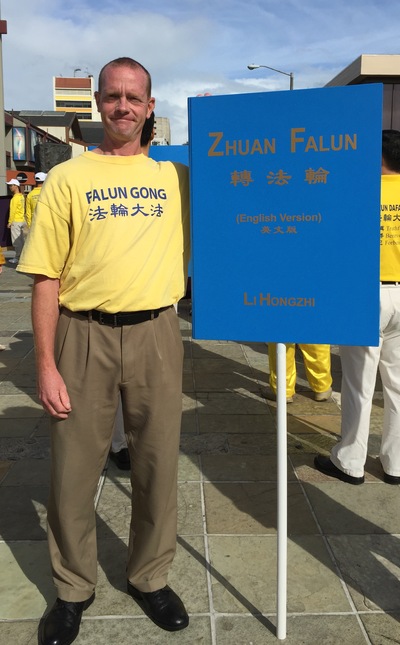 There was only one problem: He wondered if he would have to leave the Marines in order to cultivate. He was in the infantry stationed at Camp Pendleton near San Diego then and eventually applied for the status of Conscientious Objector, a person who for reasons of conscience objects to serving in the armed forces.

He was moved to a company office and did administrative work while waiting for a response to his application. There, he realized that the key was to treat everyone with compassion. It wasn't about fighting or not fighting. He wouldn't have to leave the Marines to practice Falun Dafa. As soon as he realized that, his application fell by the wayside, and he was promoted. He left the Marines in 2003, after he had served his term of duty.

Carol Wickenkamp from Washington State began practicing at the end of 1999. The cultivation of Dafa, to her “is part of your whole life” and “permeates your life.” “You are practicing Dafa in the grocery store when somebody runs over your heels with their cart. It's in the very calm, ordinary, and everyday things where you can practice Dafa.”

"The persecution of Falun Gong in China," she said, “is probably the worst evil that mankind has ever experienced, because now everything is so global. Even though most of the persecution is in China, it still reverberates around the world. Governments pretend that it isn't happening, because they don't want the Chinese government to be angry with them.

“People need to be aware that such evil things are happening. Many people are very complacent and don't even believe the existence of evil anymore. I think at some time in everyone's life, they will have to make a choice between what is good and what is bad, what is right and what is wrong. I think this is the biggest wrong that's happening in the world today. And that gives people something to start thinking about.” 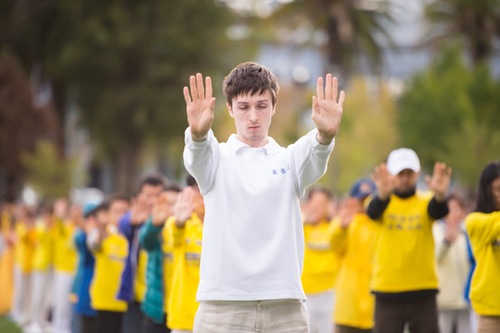 Today San Francisco saw two marches and two rallies, one near downtown and Chinatown and the other near the Chinese consulate and City Hall. The 2014 West Coast Falun Dafa Cultivation Experience Sharing Conference occurs on Thursday. Additional rallies, marches, and group exercises are planned for different parts of the city on Friday.

“Podcast (Cultivation): “The Evil CCP Culture Must Be Eliminated””