(Minghui.org) Peter Ebertz is an underwater operations engineer with special skills. He has to be 100% focused due to the nature of his work; otherwise he may put his co-workers' lives at risk. He relaxes only after he is out of the water and breathes fresh air. At that time, there is just one thing that Peter wants to do - the Falun Dafa exercises! 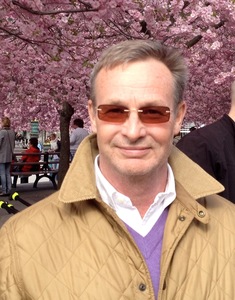 Peter is not talkative, and he used to always stand behind his wife, Bolette Ebertz, a Korean woman who grew up in Sweden.

During the 2014 European Falun Dafa Experience Sharing Conference, Peter finally “rose out of the water.” People only recently realized that he had been practicing for 19 years. Peter started to talk about his cultivation journey with a little shyness: “I am not good at expressing myself in writing or speaking. There are many Falun Dafa projects to do. If my wife did something, I was happy to follow along with her. If she made some suggestions, I would follow them. For so many years I was always the one who followed and assisted her.”

Bolette, Peter's wife, was one of the practitioners who attended Master Li's early lectures. Nineteen years ago in 1995, Master Li gave a Falun Dafa lecture in Gothenburg, Sweden, in person. Bolette went to the lecture. Peter couldn't go since he was traveling for business. The evening he returned home, Bolette showed him the first exercise. It was so beautiful!

“I had no interest in anything spiritual before, while my wife was the opposite. She had been pursuing something spiritual and had tried many kinds of qigong. When she first showed me how to do the Falun Dafa exercises, I wanted to learn them right away!”

At that time Bolette had health problems, and she smoked and drank. She had learned a form of qigong from a local traditional Chinese medicine physician to improve her health. This physician also told her about Falun Dafa. Bolette met Master Li Hongzhi (the founder of Falun Dafa) at the lectures in Gothenburg. A few days later, Peter also had a chance to see Master Li in person.

The day after Peter returned from his business trip, he attended the next Falun Dafa lecture. Since he had just started to learn the exercises, he felt his movements were not accurate, so he was going to step back. Just then, he saw Master Li waving to him to encourage him to join the others. He felt embarrassed and went away to hide.

“That was the first time I saw Master Li, and I felt embarrassed. If it happened today, I would do it very differently,” Peter said and smiled.

Bolette started practicing to improve her health. There was a surprise in store for her when Master Li taught the second exercise: “Slowly raise both hands, hold the wheel in front of the head, have the fingers of the hands pointing towards one another, form a circle with the arms, the palms should point towards the face at eyebrow level,” he said. This was a very simple standing stance, but Bolette felt changes in her body.

“I raised my hands to eye level, and one second seemed very long. I worked so hard to keep my hands up that I started to sweat. I had never sweat like that before, and it kept dripping into my eyes. I could feel the energy flowing inside me, and the sweat was pouring off me.”

This strong physical reaction was unusual for Bolette. She tried her best to maintain the posture. Her mind calmed down, and she felt safe and comfortable. Very slowly and carefully, she felt her bent thumb being corrected. She slightly opened her eyes and saw Master Li smiling.

Swedish practitioners learned the exercises instructed by Master in person. Everyone experienced his care at that time.

“We were fortunate to be able to sit around Master Li and were so happy, like a group of little kids,” Bolette said.

Spreading the Truth about Falun Dafa at the Swedish Congress

After the persecution started, it took Bolette a few months to realize a practitioner’s responsibility to stop the persecution, to safeguard the Fa, and awaken sentient beings. She started to help people understand Falun Dafa. Peter followed her lead.

While talking with a couple of fellow practitioners, Peter said, “You may think we can help each other and improve together. In reality, however, it's the opposite. We have lived together for 34 years and know each other too well. When there is a conflict, we still treat each other as husband and wife instead of fellow practitioners. But, compared to our situation before cultivation, now when we look back at the conflicts, we don't blame each other anymore, and there aren't any negative feelings.”

The documentary Free China pushed Peter to spearhead some truth clarification efforts. He was touched and encouraged by the film. Free China was co-produced by New Tang Dynasty TV and well-known human rights documentary director Michael Pearlman. The film tells the stories of two different practitioners and details the persecution of Falun Dafa practitioners in China. It has won six international awards and has been translated into 12 languages for private screenings around the world.

Peter said: “My thought was to use the film to initiate activities to inform people about the persecution. That is a practitioner's responsibility. However, I didn't plan to take the lead. When I was encouraged to, I wasn't sure if I was mature enough. I accepted the responsibility with hesitation. I had to overcome my weaknesses, such as laziness, lack of tolerance, etc.”

Peter worked with many fellow practitioners to find opportunities to help people understand the facts about Falun Dafa. A few months later, they were able to open the door to meeting with VIPs in the Swedish government, and they showed the film to Sweden's Congress. With a congressman's help, they arranged many more private screenings for politicians. Since then, Free China has drawn the attention of those in positions of power and influence. The facts about the persecution are now known in Sweden, and people have started to pay attention to human rights issues in China.

Six months later, the Swedish Congress held the “Forum about the CCP's Organ Harvesting.” Members of Congress from different parties organized the forum, and it attracted a large audience. Many of the members signed the petition written by Doctors Against Forced Organ Harvesting.

“Whenever I see people come to watch the movie Free China, I am very touched and happy. We have been holding private screenings in Almedal for two years. Many practitioners have helped distribute flyers. They have stood outside for hours in all kinds of weather. We've often had a full house or sold-out screenings and had to add an extra one.”

Peter doesn't feel oppressed or lonely when he works deep underwater. Every time he surfaces, he enjoys that moment. The joy is beyond ordinary feelings, and his heart is at peace.