Looking Beyond the Product Label: Filthy Toothpicks Made by Forced Labor

(Minghui.org) In Wangfangdian Detention Center in southern Liaoning Province, detainees are made to do forced labor for long periods of time. The products they make include toothpicks in assorted colors, the kind often used in restaurants, hotels, and homes. Detainees here refuse to use these toothpicks, as they were produced in terribly unsanitary conditions.

Forced labor in these detention centers peaked between 2000 and 2002, when the Chinese Communist regime's persecution of Falun Gong was at its most rampant and a large number of practitioners were detained there. Everyone, regardless of age or physical condition, was required to wrap toothpicks. 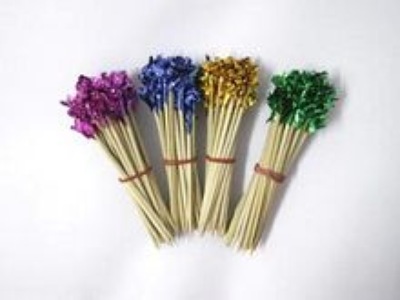 To perform this task, detainees used a diluted adhesive that emitted a pungent smell. In each cell, this chemical was held in an old plastic washbowl next to the toilet. When detainees took glue from the bowl to fill their individual containers, many could smell a strong urine odor.

Because cells did not have enclosed bathrooms, eating, working, sleeping, and toilet use all took place in the same room. Visiting officials and guards paid attention only to productivity, not sanitary conditions. Due to an unreliable water supply, sometimes one could not even flush the toilet, let alone wash his/her hands before returning to wrapping toothpicks.

Guards usually assigned key inmates—often those with a history of violence or connections to organized crime—to manage each cell. This was done for two reasons: guards did not want to offend them and risk retaliation, and this population was more likely to pay guards in exchange for comfort or privilege.

As a result, these “head inmates” could restrict other detainees' eating, sleeping, and toilet use. Some practitioners saw people with filthy hands (and no ability to wash them) rubbing nasal discharge on a pile of toothpicks.

In addition, some detainees used the toothpicks to scratch their athlete's foot or ulcers. These toothpicks, too, would be wrapped and packed. Such acts became a norm in the dirty environment that lacked hygienic alternatives and means of protesting the inhumane treatment.

It was reported that these toothpicks appeared in upscale restaurants and could be exported. Many boxes were printed in foreign languages. The wrapped toothpicks were laid out in nice patterns before the boxes were sealed.

Forced labor took place in other detention centers as well: Changliu Detention Center in Tonghua City, Jilin Province often held more than 30-40 detainees per cell (28 square meters / 300 square feet). One-tenth of the space was designated for bathroom use, and the remaining area was used for eating, working, and sleeping. [1]

In addition to poor hygiene, the toothpick production imposed long hours on detainees: most worked from early morning until after midnight. Each day, detainees were each given only two steamed buns and two bowls of vegetable soup. The elderly, including Falun Gong practitioners, were often beaten by guards with wooden sticks if they were unable to meet their production quotas on time.

As a result of the poor conditions, many detainees had lice or scabies. In one incident in August 2001, sewage was mixed into the drinking water. Over the course of three weeks, more than 200 detainees were afflicted with diarrhea, dysentery, or fever.