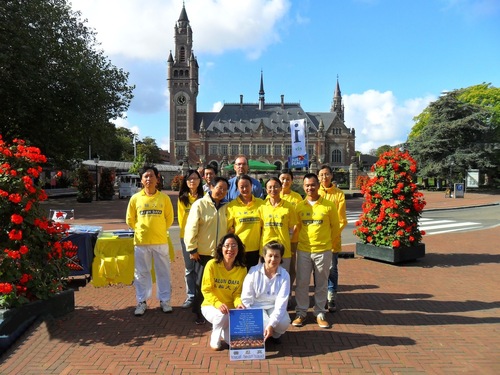 Practitioners in front of Peace Palace on the Day of Peace, September, 21, 2014

The United Nations marks this day as a universal Day of Peace. Many organizations and peace supporters participated in this annual observance in The Hague, the International City of Peace and Justice. Falun Gong practitioners' activities spanned the entire weekend.

Dutch practitioners held a peaceful demonstration in front of Peace Palace, which is visited daily by tourists from around the world.

Visitors from Colombia, Canada, Vietnam, Japan, India, Jordan, and other countries in the EU learned of the crimes being committed against Falun Gong practitioners by the Chinese Communist regime. Many of them signed a petition to condemn the persecution and spoke with practitioners about the persecution.

A young couple expressed their appreciation for the information and offered support for the practitioners' efforts. They had learned about Falun Gong in Australia.

A Canadian tourist read one of the practitioners' handouts about the persecution and said, "I can't believe this--it's terrible. It's disgusting."

A Dutchman noticed the practitioners' yellow shirts printed with the message "Falun Dafa Is Good" and asked where he could buy one. He said that he had already heard about Falun Gong, took a few photos, and offered his best wishes for the practitioners' success in their future efforts.

“Cases Where the Perpetrators of Persecution Met With Ill Fates (2013)”