(Minghui.org) The 2014 Australia Falun Dafa Experience Sharing Conference was held in Canberra on September 28, 2014. More than 20 practitioners shared their stories and understandings on their cultivation paths.

Kevin, a young practitioner from Vietnam, had never been to a Falun Dafa conference before. He was touched by the speeches shared. “I am very grateful to Master and fellow practitioners for such an opportunity. I believe it will be a big help for me.”

Ester, an Australian, said the articles covered diverse topics. “These articles discussed serious issues, while some had vivid examples that made you smile. They reminded me of many attachments of my own, and pointed to some areas that I had ignored.” He said he needed more time to absorb the articles.

“Fa conferences are sacred to me and it is always exciting to attend such events,” said Mr. Huang. He said whether preparing for an experience-sharing article or listening to others, the entire process of an experience-sharing conference from beginning to end was like a rebirth.“I could tell that these articles were well selected and were of a high standard. They described how practitioners from various professions and social status do the three things well.”

Mr. Huang's wife also found that the conference provided her a good opportunity to improve. “The speakers ranged from a six-year-old to elderly practitioners in their 80s, and I liked all of them.”

She said agreed with one practitioner who shared that whenever one slacks off in Fa-study or cultivating one's character, he or she could be interfered with by affairs in everyday society. “That means we have to bear in mind all the time that we are Dafa practitioners, and that we guide our words and actions with the principles of Truthfulness-Compassion-Forbearance.”

Let Go of Oneself and Be More Diligent

Peta Evins, a mother of two from Melbourne, said she was busy with news media work every day. “On the surface I am doing what a Dafa practitioner is supposed to do, but in my mind I have slacked off, compared to what I did in the past.” Peta said she was touched that many practitioners were diligent and sensed the urgency of helping the world's people understand the truth about the persecution of Falun Dafa.

“I learned why it is so important to help the Chinese people learn the facts, as, unlike Westerners, they have been severely poisoned by hate propaganda from the Chinese Communist Party (CCP). In other words, the Chinese people are in real danger unless they can awaken to the true situation.” Peta said she was especially moved by some practitioners' efforts to help as many Chinese people as possible.

“I am very fortunate to come to the conference today and I listened with a pure heart. I learned a lot from fellow practitioners and I will do better in studying the Fa, doing the exercises, and clarifying the truth,” she said.

Barbara Thomson from Adelaide came to the conference with her husband. “I did not know I had so many attachments until I came here today and listened to other practitioners.” She said other practitioners' sharings were very good and encouraging. “This reminded me of my attachment to comfort. This is something I especially need to work on and get rid of.” 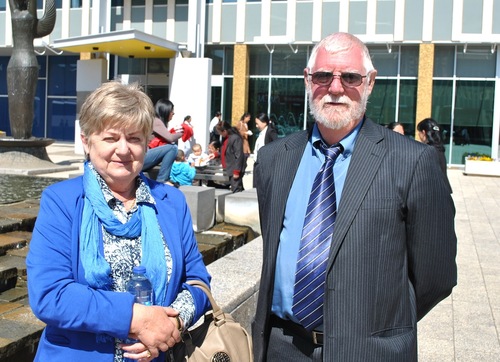 Barbara Thomson and her husband said they felt encouraged by the Fa conference.

Righteous Thoughts and Looking Within

Mr. Kim and his wife, Tiffney, attend the Australian Fa Conference ever year, “We have both benefited a lot from these conferences, especially this year.” Tiffney noted that the sharing articles this year had hardly any “show-off mentality,” but rather they focused more on looking within and making progress in one's cultivation. Influence from the CCP Party culture was significantly reduced. “Practitioners are becoming more mature,” said Mr. Kim.

Western practitioner Cansin felt the same way. “We know it is important to make breakthroughs on personal cultivation. But collaboration as one body and moving forward as a group is Fa-rectification's requirement for us. We need to change ourselves, instead of complaining or blaming others.” Cansin said she also learned to maintain strong righteous thoughts all the time. “We should not yield in front of tribulations, including symptoms of illness karma.”

Young Chinese practitioner Karen and her mother Xiaomei said they gained a lot from the articles on clarifying the truth about Falun Dafa. Karen said she was specifically impressed by the sharing of a Western practitioner, “She is an English teacher and she did very well finding opportunities to talk to Chinese students about Falun Dafa.”

Xiaomei said every one of the articles was outstanding. Unlike previous years, the articles this year spent little time describing experiences of first learning Dafa. Instead, they emphasized how to cultivate well and awaken people—something very beneficial to practitioners like her.

Margery Dunn is from Queensland and she had practiced for 15 years. “I am very happy today. Canberra is bathed in sunshine and the Fa Conference venue is very sacred.” She was impressed by the in-depth sharing that covered diverse topics. “Every sharing article was unique because they talked about how practitioners overcame various challenges to make progress. For example, I went to tourist sites twice a week and I was thinking I had done well enough. But when hearing from practitioners who were going there every day, it inspired me to think of what more I can do.”

Rare Opportunity to Learn from Others

Alex from Dubbo, a small city in Eastern Australian, came to the conference with his son. “I live in a small village and there were hardly any opportunities for me to share with other practitioners.” He said conferences like this one were very beneficial, especially with so many in-depth discussions. “I cherish this opportunity and it gave more further understandings on cultivation and saving sentient beings.” 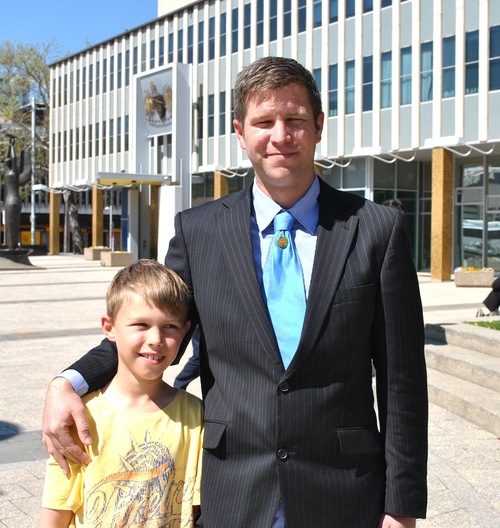 Alex, who attended the Fa conference with his son, said he appreciated the rare opportunity to hear fellow practitioners' experiences.

Janine Rankin from Melbourne commented, “We are very fortunate to have Fa conferences so that we can learn from each other.” She said overcoming tribulations on her own was sometimes challenging. “This is why I felt I gained so much from the sharing articles today. When walking out of the conference hall, I just wanted to say: 'Thank you very much, Master.'”

Rankin said she was impressed by the experience of two young sisters. “They were so young, but they have achieved a lot in their cultivation. I can see their pure hearts and compassion. It is amazing to see how they made progress in their cultivation and improved their character. Their stories made me think how I could do better.”

Ms. Luo, a coordinator in a news media project, said the conference was sacred and well-organized. “More importantly, it helped us to dissolve barriers between practitioners. Many practitioners have strong righteous thoughts and pure minds, something I lack when I'm busy with projects.” She now realized that the barriers between various projects should not have existed and her negative thoughts also disappeared.

“After all, we are here for one purpose – to awaken sentient beings.” Ms. Luo said she believed that Master paid attention to practitioners' hearts, not necessarily specific formats or approaches. “With human notions, we tend to overemphasize our own projects and our own roles, which creates all kinds of inference.” She said the experience-sharing conference helped resolve these problems.

Queensland practitioner Ben Smith explained that the righteous thoughts and actions from practitioners helped him understand one thing, “That is, we should always place Dafa in the highest priority. If we are clear on this, many things would become straightforward. Things will be just fine if we practitioners are always considerate of others.”

Ben Smith was also impressed by the power of the Fa in fellow practitioners' lives. “There was one six-year-old girl who could read Chinese and gave a wonderful sharing, which was amazing. She and other young practitioners are able to get up early every day to do the exercises. Their determination and perseverance is something I just need to learn from.”