(Minghui.org) This new report analyzes the financial incentives and sources of revenue that drive one of the most extensive, brutal, and profitable industries in China today. The Chinese regime’s persecution of Falun Gong revolves largely around institutionalized brainwashing: a highly efficient, highly monetized system executed by dedicated facilities in each city and every province.

The report is prepared using data collected by the Minghui website between 1999 and 2013. The Executive Summary is reproduced below. The entire report can be downloaded in PDF format here. 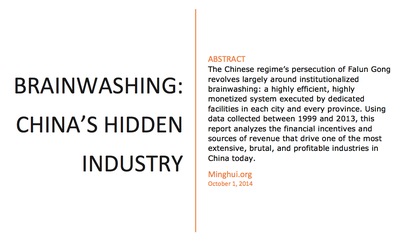 In late 2013, the Chinese regime claimed to shut down its notorious forced labor camp system after tremendous pressure from the international community. However, this was a change in name only; many of the camps were simply replaced by “black jails”— extralegal detention and brainwashing centers.

These centers are a critical component in the Communist regime’s persecution of Falun Gong. Brainwashing supports the regime’s goal of wiping out Falun Gong by forcing its practitioners to renounce their beliefs through coercion and torture, both physical and psychological. Local government officials and brainwashing center personnel also profit from this scheme, with performance-based rewards and opportunities for building personal wealth via extortion.

In an environment where the Chinese regime is faced with grassroots challenges to both its policies and power, systematic brainwashing is seen as an expedient solution. As implemented, it allows the regime to use financial incentives to increase obedience in its campaign to stamp out ideological opponents.

The Minghui website includes a vast repository of exclusive firsthand accounts of persecution from inside China. Drawing upon 15 years of published reports and original research, this whitepaper offers unique insight into China’s brainwashing industry: a key component in the abuse of human rights in China overall, and the persecution of Falun Gong in particular.

From our accounts, we have gathered that the industry compels the public to participate in the persecution in various ways:

• Large numbers of police and guard staff are paid to carry out coercion, torture and “transformation.” Incentives reward those who meet or exceed “transformation” quotas.• Employers are made responsible for cooperating with and even orchestrating arrests and detention of practitioners in their organizations.• Employers are charged “education fees” and “companion fees” for each Falun Gong detainee sent for brainwashing. Employers are thus dissuaded from hiring Falun Gong practitioners.

We estimate that over the past fifteen years, fees charged to detainees’ employers totaled approximately 3.37 billion yuan. Government incentives for each “successfully transformed” detainee brought in a further 226 million yuan. This is in addition to government appropriations of an estimated 1.18 billion yuan dedicated to the construction and remodeling of brainwashing facilities. 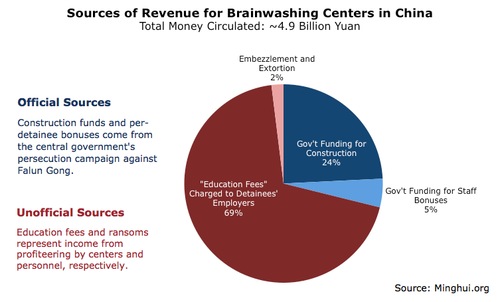 Corrupt officials at various levels of the industry also reap substantial illicit profits from detainees, their families, and their employers by routinely demanding so-called “fines” in exchange for practitioners’ release. Due to the state-sanctioned nature of the brainwashing system and systemic corruption, officials are not held accountable for these transgressions. The total amount extorted as of 2013 is estimated at around 95 million yuan.

Due to sparse documentation and censorship, these figures constitute only rough approximations of the actual amounts circulated. Nevertheless, they offer a glimpse into the financial impetus of human rights violations in China.

Driven by political and financial gain, officials and brainwashing center personnel have shown themselves more than willing to inflict torture on their fellow citizens: as of 2013, 15% of the 2,383 practitioners confirmed killed in the 15-year-long persecution of Falun Gong were tortured to death in brainwashing centers.

The official end of the labor camp system was celebrated, and understandably so. However, the hasty exodus of persecutory targets into brainwashing centers and black jails tells us that things are still regrettably the same in China. Shining a light on the brainwashing system is a first step in the right direction, but to truly, fully stop an indoctrination machine of this size and magnitude, we must again bring this issue to the international stage.

“Liaoning Auditor in Detention for nearly a Month”