(Minghui.org) Hundreds of practitioners from all over Australia gathered in front of Parliament House in Canberra on the morning of September 27, 2014. Dressed in yellow and white, they formed a lotus flower and gigantic letters spelling “Falun Dafa.” The beautiful scene caught the attention of many passersby. “This is amazing,” said Antony Taylor, an engineer who was driving by with his wife, “It is something I've never seen in Australia. It is very touching.”

According to Michael Lam, one of the event organizers, practitioners came from many regions of Australia. “We've had a series of activities over these days, plus an experience-sharing conference on Monday,” Michael explained. “We have benefited a lot from Falun Dafa and now we would like it to introduce it to more people.” 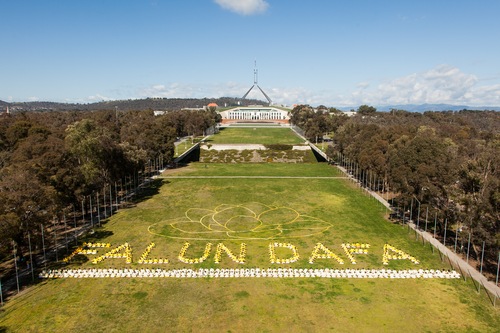 Large-scale character-forming in front of Parliament House in Canberra, Australia on September 27, 2014. 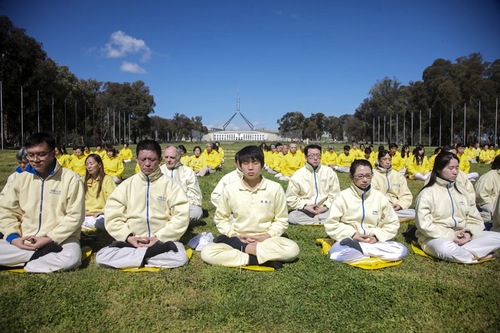 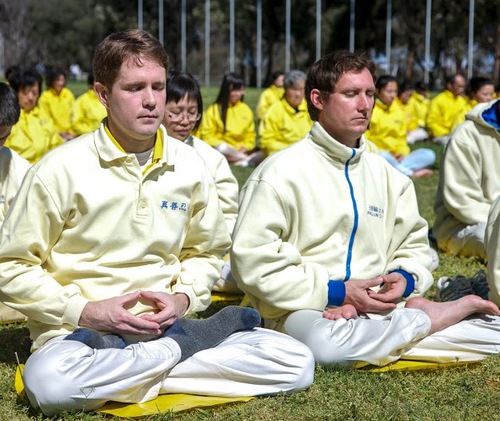 Practitioners participating in the character-forming event

Taylor and his wife Carmon had come to Canberra for a wedding. Drawn by the large crowd and the calm atmosphere, he parked his car so that he and his wife could come closer and gain a better view. Taylor said, “As a teacher, I enjoy this very much. It is a wonderful thing to see an event of this scale, so well organized and so peaceful.”

“Plus, it provides a great opportunity for people to not only celebrate their own culture and belief, but to also share them with the public,” Carmon added.

Cath, a tourist from Sydney, shared a similar view. “I did not expect to see such a large group here. Being here makes me feel relaxed and in harmony. It is just wonderful.” 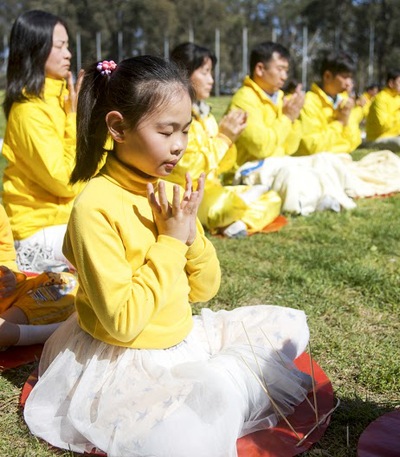 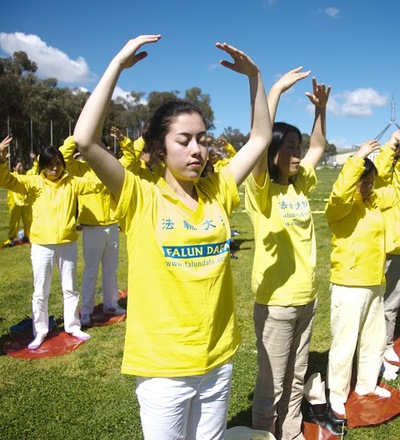 Group exercise during the gathering in Canberra on September 27, 2014

“Lots of Hard Work, But It's Worth It”

Mr. Lam said that the preparation work started right after the permit was approved. Many practitioners, especially young ones, came to Parliament House the day before to lay out the sitting mats. “We continued working on it this morning. Overall, I think the activities went on well.” He explained that the lotus flower represents purity and sacredness, just as practitioners cherish the practice of Falun Dafa and the principles of Truthfulness-Compassion-Forbearance.

“Chinese characters were often used during previous character-forming events,” Mr. Lam said, “but this time we decided to form the words 'Falun Dafa' in English—after all, English is the primary language here.” Choosing the location was not a trivial decision, either. “Parliament House in Canberra is a landmark in Australia. By doing this, we hope more people can come to know about Falun Dafa.”

Lam said that he and other practitioners had put a great deal of effort into this activity. “It is lots of hard work, but it's worth it,” he concluded.

A Path Towards the Future

John Deller, designer of the character-formation, said that this activity coincides with Floriade, a month-long event that started two weeks earlier. Known as Australia's biggest celebration of spring, Floriade attracts about 400,000 local, interstate and international visitors each year.

“A deeper meaning of the lotus flower is its symbolic meaning,” Deller continued. Historically, the lotus flower has been widely used in traditional Chinese culture to represent serious followers of cultivation practices—growing out of mud and retaining their pure, elegant caliber.

“Lotus flowers are special for us Falun Dafa practitioners because we specifically cultivate in this everyday society. By following the guiding principles of Truthfulness-Compassion-Forbearance, we are able to improve and purify our mind nature, let go of bad thoughts, and elevate from this earthly world to higher levels. This process requires endurance and perseverance, but in the end we are able to get there—just like a lotus flower will eventually rise from the mud, following sunlight, and turning to blossom above water.”

Such a positive attitude and energy is also important for society at large. “And that is why we are here today, at the Australian capital, to share this with the public. We sincerely hope that this can offer perspectives towards a brighter future, finding new approaches for personal conflicts and novel ideas for social problems.” Deller added that photos of the activity would be posted on the Internet, so that more people could experience and enjoy it.

“Taxi Driver and His Family Arrested and Tortured, Threatened with Brainwashing”

“Liaoning Auditor in Detention for nearly a Month”