(Minghui.org) Today's News from China includes incidents of persecution that took place in 14 cities or counties in 8 provinces. In this report, 16 practitioners were subjected to mistreatment during their detention, and at least 8 practitioners were illegally arrested. 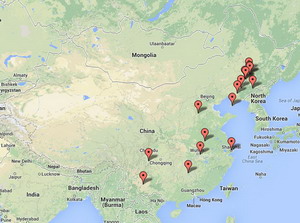 Mr. Jiao Lin is in his 50s. He was arrested in the spring of 2011 and sentenced to three years of imprisonment. He is incarcerated in Dongling Prison. It is said that Mr. Jiao's health is declining and his entire body is swollen.

Mr. Xu Peng was detained in Siping Prison for over a month after he clarified the truth in July. Every day, from 3:00 or 4:00 a.m. until 9:00 p.m., he was forced to sit on a wooden bench. The bench was only three to four fingers wide. Mr. Xu was sentenced to 12 years of imprisonment and previously held in Gongzhuling Prison.

On August 6, Siping Prison was shut down. Mr. Xu was transferred to Gongzhuling Prison.

Doctors from Siping Prison Hospital diagnosed Mr. Shi with tuberculosis but later said it was pleuropericardial adhesion in early 2009.

Guard Li Cheng used an electric baton to shock Mr. Shi on July 6, 2012, making him loose consciousness and bite his own tongue. He had to have nine stitches in his tongue at Siping Hospital.

Mr. Shi was beaten by inmate Jiang Changwei on March 10, 2013, and was hospitalized again. He was transferred from Siping Prison Hospital to one of the prison hospitals in Changchun.

Guards Li Cheng and Wang Hexun stripped off Mr. Song Jincai's clothes, pushed him down, and kicked him on the afternoon of November 17, 2011. Due to prolonged physical abuse, Mr. Song suffered from frequent urination. Inmate Liu Zhongji stopped Mr. Song from using the toilet on the morning of November 18, 2011, and hit him until he fell.

When practitioner Mr. Liu Hongcai intervened, he was sent to the guards' office. Encouraged by guard Zhou Jijia, several inmates ganged up, hit Mr. Liu, and broke his eye glasses. Afterwards his face was swollen and covered with bruises.

Mr. Chen Ping is 49. He became blind after being tortured in Siping Prison. He is no longer able to take care of himself. He has been transferred to Gongzhuling Prison in Jilin Province.

Ms. Hou Guizhen was arrested by officers from Hongqi Police Station for putting up truth clarifying stickers on the evening of October 26, 2013. That night, her home was ransacked. Her Dafa books and informational materials were taken away. Ms. Hou is still being detained at Hongqi Police Station.

Three practitioners were detained at a brainwashing center on October 22. The center was established by the 610 Office in Linghu Fishery in the Zhuhui District. The practitioners are Ms. Tan Jinyun, 56, from Buyunqiao Township of Qidong County; Ms. Zhou Jinmei; and Ms. Zhou Jinyu from Baidi City.

Ms. Tan was forced into a police ca by Zhou Wusheng and three others from Buyunqiao Township 610 Office on the afternoon of October 21. Shef has been arrested three times since 1999. She has been on a hunger strike for several days and has symptoms of high blood pressure.

Ms. Ge Shurong from Zhaojiagou was arrested by officers from Gucheng Police Station on the morning of October 25, 2013. She is being held at Nongan County Detention Center.

Ms. Zhang Zhixiu from Qingxi Township is 62. While she was distributing informational materials about Falun Gong on September 17, 2013, she was forced into a police car by officers from Qingxi Police Station. Her current whereabouts are unknown.

Ms. Chen Shulan and Ms. Meng Xiangfen were detained for 15 days in Anshan by officers from Wangshi Police Station on October 7, 2013. Ms. Chen was taken to Anshan Detention Center. After having 5,000 yuan extorted from her, Ms. Meng was released.

Mr. Feng Xingji was detained and tortured in Tilanqiao Prison for two months. His family has not been allowed to visit him for three months.

Ms. Shen Chunmei was arrested on the afternoon of October 26, 2013 and her home was ransacked. At the same time, Ms. Zhang Baoqin was also arrested.

Mr. Ma Zhuyin was unlawfully arrested and taken to Shijiazhuang Brainwashing Center by 610 Office staff on the morning of October 25, 2013.

Ms. Yin Shuyan is retired from Kunming Machinery Factory. She was arrested by Qiu Xueyan and others from the Xishan District Domestic Security Division on October 9, 2013. Her home was ransacked. She is being held at Kunming Detention Center.

“Ms. Zhu Ruiying Arrested on Her Way to Visit Practitioners in Prison”