(Minghui.org) Wednesday was the final day of the first Falun Dafa nine-day lecture series of the year offered at Tianti Books in New York. This was the second nine-day lecture series held in the bookstore since its grand opening in October 2013. Watching the nine-day video lectures is considered a major milestone for a new Falun Dafa practitioner to embark on the journey of spiritual self-improvement.

Everyone's experience during the course of the nine days was different, but each had a story to tell. There were intense winter weather conditions, long commutes, and physical and emotional challenges during the nine days, along with tears and laughter. There were touching and heartfelt experiences as well as the intensely profound.

In the end, all of the participants persevered to the finish despite all the challenges, and were richly rewarded with a very worthwhile experience – far more even than they had anticipated. 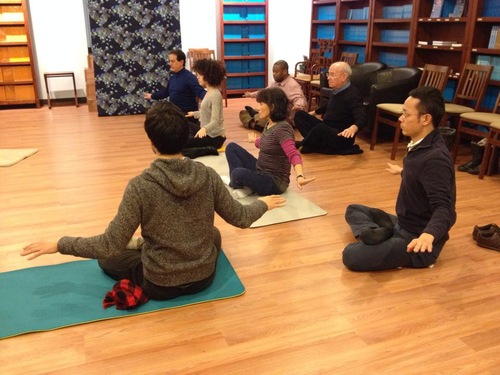 Even before the lecture series had concluded, the students were anxious to set a date for a class reunion. With the profound and positive changes they'd experienced in themselves over just the first several days of the class, they knew they'd want to return to share experiences together in the future. 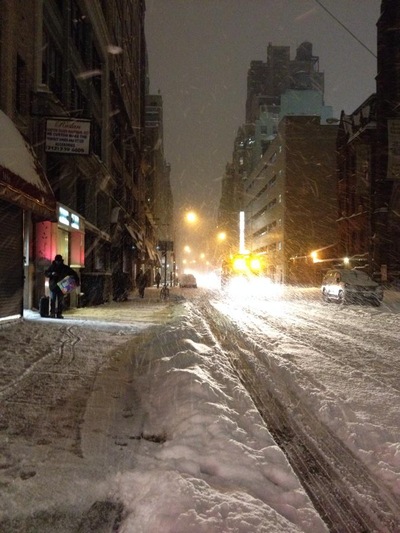 The street outside Tianti Books during the snowstorm on the night of January 21, 2014.

A big snowstorm hit New York on the first day of the nine days, causing severe traffic jams and delays across the New York metropolitan area. Public schools closed early. As evening approached, the weather became even harsher with snow lying thick on major thoroughfares and side streets alike. Few people were out.

Nevertheless, the nine-day series at Tianti Books started at 6:30 p.m. that day as scheduled. Eleven people made it despite the inclement weather, many of them having never practiced Falun Gong before. Some had learned about the lecture series on previous visits to the bookstore. Others had come across Falun Gong elsewhere but had never watched the lecture series. They were eager to join the class despite the weather and all were able to reach home safely that night. Ten of them successfully completed the entire nine day lecture series. 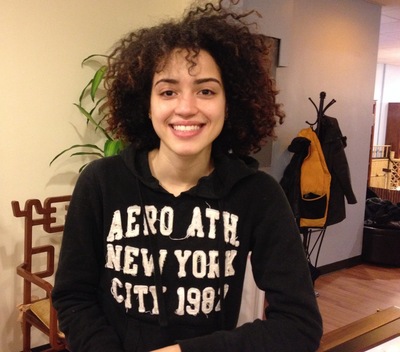 Priscilla, one of the new students

Priscilla is a college graduate. She passed by Tianti Books at the end of last year and signed up for the nine-day series. She said, “I've been waiting for this my whole life.”

She overcame a lot of difficulties to complete the lecture series. When she received the reminder email two weeks prior to the class, she made up her mind to take the train to Manhattan from Pennsylvania to attend.

Despite the challenging weather conditions, she arrived early at the bookstore each day to read and immerse herself in a very good energy field. She left the bookstore every night with sparkling eyes and genuine smiles. 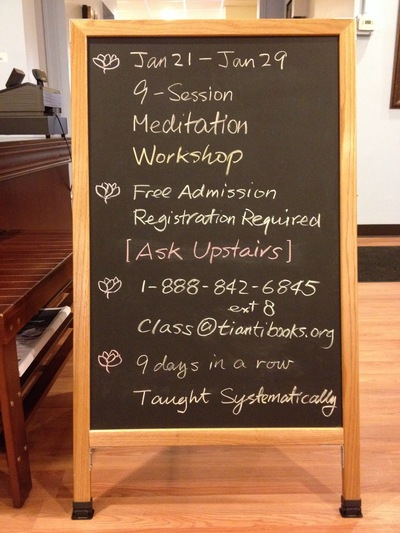 Chris passed by the bookstore the day before the lectures began and immediately went upstairs to register. His body reacted strongly to the lectures. He shared on the last day that when he heard Mr. Li speaking about body cleansing and that some people would throw up and have loose bowels, he didn't think much about it. However, when he experienced these same reactions himself, he realized that was what it was!

He couldn't eat much as the cleansing was underway, but he made it to the class every day and felt quite energetic. One day toward the end he smiled and said, “I am able to drink cappuccino today!”

He shared one more thing at the end of the series. Even though the requirement was that one should not skip classes, he had planned to miss the fifth day due to his job. However, when he had reactions to body cleansing on the third day, he realized that missing a class was not a good idea. Therefore, he obtained help from his colleague so he could join the class. He noticed changes in himself each day and really enjoyed the nine-day series.

Another student, Rhodora, managed to overcome three schedule conflicts with other classes during the nine days. On the seventh day, she cried not knowing which to attend. In the end, she chose to go to Tianti Books. She said, “I really want to learn this [Falun Gong].”

The nine-day series changed her. In the past, if someone mistreated her, she was sure to return the same to the other. After attending the nine-day series, she realized that a peaceful response would be much better. She asked herself not to say anything that she might regret later. She vowed to cultivate her xinxing. 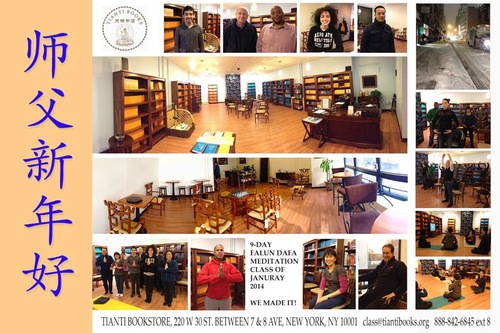 More than 15 people have already registered for the next nine-day Falun Dafa Lecture series on March 4 – 12.

Background on the Tianti Bookstore

Tianti Books opened its Manhattan location in October 2013. The bookstore is located in Chelsea, a prosperous and bustling midtown Manhattan neighborhood with a rich cultural atmosphere. The area has seen an increasing number of art galleries over the years, and is home to many artists and people with a passion for the arts. The area is a wonderful place to linger for both New Yorkers and tourists.

Stepping into the Tianti Bookstore provides an immediate respite from the hustle and bustle of the busy streets. Visitors are immersed in peace and tranquility. Spacious and comfortable, the bookstore is decorated with classically elegant furniture. And they serve great coffee and snacks as well!

Tianti Books will continue to offer the Falun Dafa Nine-Day Lecture series in upcoming weeks and months. They invite readers to visit their Facebook page for more information, or to stop in for coffee, conversation, and to browse the wonderful selection of books.