(Minghui.org) As the Chinese New Year holiday approaches, many Falun Gong practitioners have been arrested or forced into becoming homeless over the holiday season. As of January 21, Minghui has received reports of 228 January arrests, 33 "trials" resulting in 16 illegal prison sentences, and 16 detentions at brainwashing centers. 3 death cases have been reported in January so far (including 2 which actually occurred in the final days of 2013).

The deaths of Zheng Zongye from Beijing, Luo Jiangping from Sichuan, and Liu Shujun from Inner Mongolia were reported in January. Luo and Liu passed away in December 2013.

All three had been subjected to severe persecution for a long time, especially Luo. Luo Jiangping was sentenced and sent to the No. 1 Prison of Yunnan Province in January 2012, where he was forced to do heavy labor, and was jailed in a solitary cell. He was on the verge of death and released on December 23. Five days later, he passed away at the age of 51.

In 2014, 33 practitioners from 11 areas were "tried" for various falsely alleged crimes. The 33 were guilty of nothing other than remaining steadfast in their chosen belief, and for having the courage to speak publicly about the persecution of Falun Gong. 16 of them were sentenced to prison. See table below. 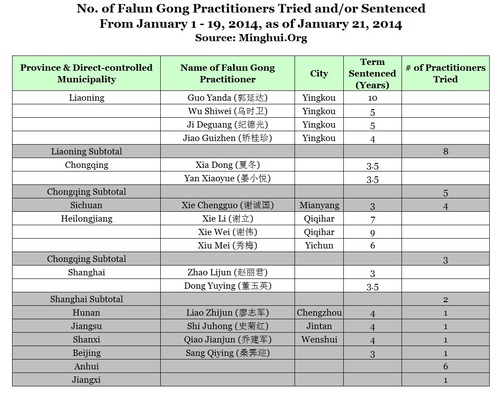 In addition, 17 practitioners were arrested and tried by the police departments in Shandong, Liaoning, Sichuan, Heilongjiang, Guangdong, Shanghai, and Hubei.

After the labor camp system was shut down in 2013, brainwashing centers all over China picked up where the forced labor system left off. Detentions in brainwashing centers are frequent because they can occur without the need for legal process, much like the labor camp detentions. Sixteen such detentions have been reported in January 2014 thus far:

On January 8, Zhang Wenying, a practitioner from Zhanjiang City, Guangdong province, was arrested by the local police and jailed in a brainwashing center in Zhanjiang.

Numerous harassment cases have been reported in Jilin, Shandong, Hubei, Heilongjiang, Hebei, Chongqing, and Sichuan. The local 610 officers went to practitioners' homes and tried to intimidate them into giving up the practice.

In addition, 610 officers and law enforcement officers often ransack the practitioners' homes and take away valuables, as illustrated below.

Policemen and 610 officers have treated Falun Gong practitioners as additional income sources to be tapped at will. They arrest and jail practitioners in detention centers, police stations, and brainwashing centers, and then ask their family members to pay a fee to secure their release, ranging from several thousand to 20,000 yuan.

Extortion cases reported so far in 2014 are summarized below. 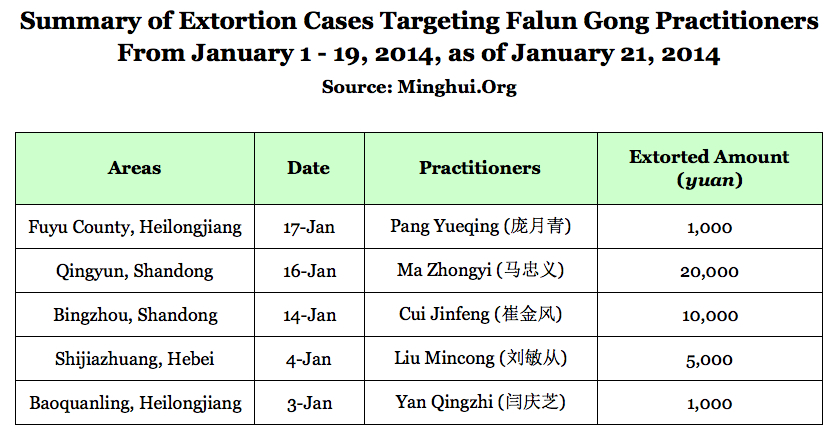 The table below lists 26 of these cases.