Personally Experiencing the Horrors of the Qinglongshan Brainwashing Center

Ms. Meng Fanli from Jiamusi City still trembles with fear when she recalls her recent experience at one of the Chinese Communist Party's forced brainwashing centers.

A friend introduced Falun Gong to Ms. Meng and loaned her the book Zhuan Falun in the summer of 1996. The teachings gave her a deeper understanding of life and the universe. She followed the core principles of Truthfulness-Compassion-Forbearance to be a good person. She was diligent at work and always thought of others first. Her supervisors and colleagues all said, “Falun Dafa changed Meng Fanli into an unselfish person.”

Since the CCP began to persecute Falun Dafa on July 20, 1999, Ms. Meng has been continuously and brutally persecuted. She was detained at a detention center once, sentenced to forced labor twice, detained at a brainwashing center once, and suffered brutal tortures such as forced-feeding and “stretching.”

Forcibly Arrested While Having Breakfast at Home

On the morning of September 5, 2012, just before she was to have her breakfast, Ms. Meng heard plainclothes police force their way into her home. With them was Hu Zhiguo (the Political and Law Committee deputy party secretary of Jiangchuan Farm, the political instructor of the Jiangchuan Farm Police Department), deputy chief Hu Zhenfu, and police officer Zhang Yubin. They were accompanied by some young police officers. They knocked on Ms. Meng's door loudly.

Her sister opened the door in a panic. The police ordered Ms. Meng to get dressed and go with them. She said, “I won't go. I am not a criminal. Why should I go with you?” The police then forcibly dragged her down the stairs and out of her home. She held the door tightly and did not let go.

During the struggle, Ms. Meng lost her shoes. On the stairs she cried out loudly, “Falun Dafa is good!” Ms. Meng's sister looked on in horror at what was happening. Her neighbors heard her cries and thought it was a robbery. They came out to see what was going on, but were blocked by the police who stood in the way.

In the police car, Ms. Meng continually told the police the facts about Falun Gong. She emphasized that heaven rules by karmic laws and everyone will ultimately pay for what they have done. She told them that Falun Gong is freely practiced all around the world except in China, where it is severely persecuted. She gave examples of retribution for those who follow the CCP to persecute Falun Gong practitioners. Those in the police vehicle sat quietly and listened without saying a word all the way to the brainwashing center.

Four hours later Ms. Meng arrived at the Qinglongshan Brainwashing Center which is officially called the “Law Education Base” of the Heilongjiang Agricultural Reclamation General Bureau. The center had an iron gate and no windows. Ms. Meng was placed in a separate room prearranged by CCP personnel. Her bed was in the middle, next to the beds of official Tao Huazhu and a person sent to watch her.

Every day Ms. Meng was locked inside the iron gate and not allowed to go out. Her food was brought to her. She was forced to watch videos that slandered Falun Gong.

During the first few days, two collaborators, Li Jingfen and Yu Xiaoyan, and Tao took turns trying to brainwash Ms. Meng with twisted logic. They quoted Falun Dafa books out of context and gave distorted interpretations to shake Ms. Meng's belief. She seriously pointed out that the two collaborators had already committed the serious sin of slandering Master and the Fa. She warned that if they did not wake up, their futures would be very miserable. She could sense the horror beneath their hypocritical expressions.

They turned up the volume as high as it would go when they played slanderous videos. Center director Fang Yuechun forced Ms. Meng's face close to the screen while the videos played. Tao insulted Ms. Meng as the videos played. When she would not cooperate, a criminal thug named Jin Yanpeng who was ordered to monitor her would brutally shove her. 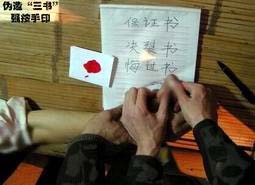 One day Fang and three thugs approached Ms. Meng and tried to get her to write a “repentance statement” and agree to give up practicing Falun Dafa. Ms. Meng said firmly, “I won't write it. If I give up cultivation under your pressure, then you all have committed huge crimes against Dafa. If you destroy a practitioner, you will all go to hell in the future. For your own good, I won't give up Falun Dafa.” Fang immediately held her and covered her mouth with one hand. The thugs grabbed her hands to force her to copy a “repentance statement” they had already prepared. Ms. Meng cried when she realized how miserable their future would be for going against Dafa.

One day Fang said to her, “Because you appear to be a kind person I did not give you a hard time. Otherwise, I would have already started to torture you.” Then he touched Ms. Meng's face suggestively.

A few days later, the thugs pulled her into the conference room and forced her to copy the “repentance statement.” As they were doing this, persecutor Zhou Jingfeng's cellphone rang. It was a text message from Falun Gong practitioners outside asking him to release Ms. Meng and to treat Falun Gong practitioners fairly. The thugs all read it and said a few words to Ms. Meng. She said to them, “I hope you all take a good look at the message. This is good for you.”

On the seventh day of her detention, Fang hid behind a curtain to watch Ms. Meng's every move. The thugs closed the door of her room and pulled the curtains on a very hot day. They forced her to squat in a corner and watched her. At night, she developed high blood pressure, her legs were swollen and painful, and she soon collapsed. Tao, Fang, and three thugs grabbed a wooden chair, and forced her face on the chair seat. They placed a photo of the Falun Gong founder on her buttocks. At dinner time, they tested her blood pressure and forced her to take an antihypertensive drug. Then, to torture her, Zhu and Zhou dragged her into a room far away from other practitioners and with no surveillance cameras.

Zhou Xiaofeng, Zhou Jingfeng and Fang Xiumei wrapped a towel around her wrist so as not to leave marks of the torture. Then, they handcuffed her hands to two separate chairs. In this position she could neither stand nor squat. Then they tried every torture that would maximize her pain.

First they put her under a table, then pulled her out and used obscene language to insult her. They put a photo of Falun Gong's founder under her feet. After a while, thug Jin Yanpeng came back drunk. He sat on her using all his weight, which was over 200 pounds. They straightened her legs so she could not sit.

Fang and another person sat on each chair and pulled very hard on her arms, which caused enormous pain. All this time her torturers ate food and drank beer, enjoying their work. They shook and twisted her hands which caused the handcuffs to cut deeply into her flesh. Her hands were turning black and purple and becoming numb. Both legs were also very sore and painful. She felt a searing pain in her heart and her face and hair were drenched in sweat. This brutal torture lasted almost seven hours.

Finally and against her will, Ms. Meng agreed to write the “repentance statement.” But Fang said abruptly, “This is not enough. We need to torture her more.” So they tortured her several more hours. Then Fang dictated the words which Ms. Meng was forced to write.

When it was over, Tao and Li pretended to comfort her with kind words and helped her to sit. Ms. Meng just cried silently. There are no words to describe the pain and numbness she felt in her heart. The spiritual rape she had just experienced felt like a living hell.

In order to completely destroy Falun Gong practitioners' will, the Qinglongshan Brainwashing Center forced those who had written the “repentance statement” against their will to copy it twice a day. Tao ran the brainwashing class and personally played the videos slandering Master and the Fa. He forced practitioners to write words that slandered Dafa. This was devastating to Ms. Meng and she just numbly stayed alive every day.

This hellish environment destroyed many Falun Gong practitioners. She often saw a male Falun Gong practitioner bent over and leaning on a piece of plastic foam. Every day he would walk out to the yard and sit. His face was a green color. He was not allowed to remove the tube in his nose for forced-feeding and just wrapped it around his head. He was extremely thin. Later she learned that he was a practitioner from Jiamusi City and had already been on a hunger strike for six months. His life was in great danger but the brainwashing center would not release him. Ms. Meng could imagine what brutal tortures he suffered. Later she heard that thugs had broken one of his ribs and burned his chin. The nasal tube he was not allowed to remove inflamed his lungs. His life is in great danger.

A couple from Qiqihar were arrested and sent to the brainwashing center. The wife was not a Falun Gong practitioner. CCP personnel pressured the husband to give up his belief in Falun Dafa every day. Under huge mental pressure, the wife often cried desperately.

One practitioner who was detained with Ms. Meng later published a solemn announcement to nullify the “repentance statement” when she returned home. When Fang heard this, he intimidated Ms. Meng and two other practitioners to find out what this practitioner told them.

The Qinglongshan Brainwashing Center used the CCP's Eighteenth National Conference as an excuse to extend detention for Ms. Meng and two other practitioners another two weeks. At the end of their detention, Fang forced them to write a letter of apology to the local police department for all the trouble they caused.

On one occasion thug Jin Yanpeng took a bath wearing only a pair of shorts and told Ms. Meng to rub his back.

Fang once got drunk and tried to take a female practitioner out with him in a car. The practitioner was so scared that she hid inside the restroom and did not come out.

Fang also used the Falun Gong practitioners as cheap labor. He forced them to plant cabbage and radishes in the yard and do menial work every day.

On January 2, 2014, Ms. Meng and 14 other Falun Gong practitioners and their families hired five righteous attorneys to sue the Qinglongshan Brainwashing Center and the responsible personnel at the Heilongjiang Agricultural Reclamation District Procuratorate. They asked the Procuratorate to immediately put an end to the brainwashing center's evil activities, and to hold those responsible accountable for their crimes. They also requested that the brainwashing center compensate practitioners for the pain and suffering they suffered physically, mentally, and financially. Official Hu accepted the complaint documents and made a detailed record. He also told them he would definitely investigate these matters and report to the higher authorities. But he did not give a definite time when the Procuratorate would respond. Ms. Meng and the other victims are still waiting for his response and also reserve the right to continue to appeal.