1,176 Signatures Demand the Release of a Villager

(Minghui.org) Mr. Xin Tingchao from Dongnanzu Village, Laishui Town, Laishui County, Hebei Province, was {illegally arrested}} for giving an elderly lady a Shen Yun Performing Arts DVD on June 14, 2013. He was imprisoned and wrongfully sentenced to three years in prison. Many citizens expressed their indignation upon hearing about it, and 1,176 more people signed a letter supporting Mr. Xin and requesting his release. 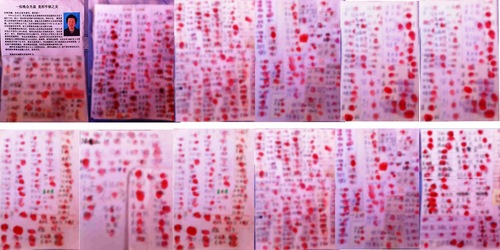 Prior to this, three groups of people totaling 2,838 in Hebei Province signed or pressed their fingerprints on the letter that demanded the immediate release of Mr. Xin from the Chaoyang District Police Department in Beijing. The village committee of Dongnanzu Village, Laishui Town also issued a letter testifying that Mr. Xin is a good person and requested his immediate release. They put their official stamp on the letter that had the signatures and fingerprints of the people.

Laishui County Police Department and the 610 Office once communicated with police in Beijing, expressing their intention of taking back Mr. Xin as soon as possible. Later on, however, the Laishui County Police Department repeatedly exerted pressure on the officials of Dongnanzhu Village, for them to gather the villagers and force them to sign a document stating “we were deceived” to renounce their signatures on the petition.

Mr. Xin and his wife are both kindhearted individuals. They are not after fame or money and are widely recognized as good people by their fellow villagers. In the words of a villager, “Xin Tingchao is a good person, always willing to help others, and is highly regarded in our village” For years, Mr. Xin voluntarily took care of the lone seniors and disabled people in his village, transporting water for them, helping them take baths, and sweeping snow off their rooftops in winter.

When he had spare time, he went to Beijing to work part-time. Once he gave a person a Shen Yun Performing Arts DVD, which is a performance that promotes Chinese traditional culture. He was arrested by personnel from the Yayun Village Police Station on June 14, 2013, and put on trial at Wenyuhe Court of Chaoyang District, Beijing, on December 2. During the trial, his defense attorney entered a not-guilty plea for him with a strong argument.

The judge at Chaoyang District Court sentenced Mr. Xin to three years in prison on the morning of December 18, 2013, citing Article 300 in criminal law, “Using a heretical organization to undermine the implementation of law,” which is against the Constitution. In doing so, the court ignored the Constitution, ignored over 2,000 people's appeal, and ignored the fact that Mr. Xin is such a kindhearted individual who always helps his fellow villagers. Mr. Xin expressed his intention to appeal at the court after being sentenced.

Earlier Reports: Farmer Sentenced to 3 Years in Prison for Handing Out a DVD; Over 2,800 People Sign Petition for His Release