(Minghui.org) The city of Prato has the largest Chinese community in Italy. It is commonly known as Italy's “Chinatown.” A group of practitioners can be seen doing the Falun Dafa exercises on a park lawn every Saturday morning there.

For the past several years, local practitioners have regularly come to the same spot to hold various activities. This has enabled the local residents to learn about the benefits of Falun Dafa (also known as Falun Gong) and the terrible persecution that's being carried out by the Chinese Communist Party (CCP).

Recently, the practitioners' activities have attracted the attention of Prato's major media. 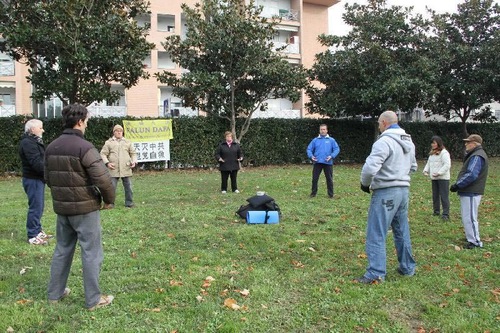 Practitioners do Falun Dafa exercises in a park in Prato, Italy. 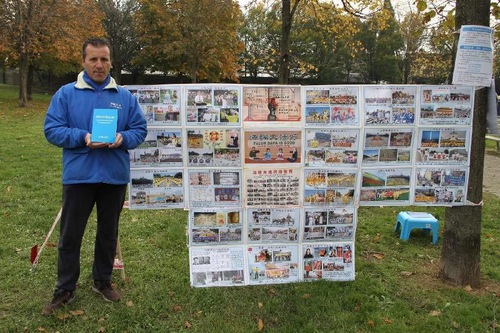 A practitioner holds a copy of Zhuan Falun as he stands in front of an informational display introducing Falun Dafa to the public.

A reporter from the daily newspaper La Nazione came to the park and interviewed the practitioners on November 30, 2013. The newspaper published an article titled, “Falun Dafa Is Not Bad: We Practice It In Prato, Too,” in its December 22 issue.

The article talked about the spread of Falun Dafa in Prato. It also covered the brutal persecution of Falun Dafa practitioners in China.

“The Chinese in Prato have an opportunity to learn the truth about Falun Dafa on December 22, 2013. Although Falun Dafa has been slandered and brutally persecuted by the Chinese Communist Party in China, it is actually beneficial to people,” stated the report.

Two Tuscan residents, Andrea and Domenico, told the reporter: “We want to raise awareness about the ongoing brutal persecution of Falun Gong by the CCP in China. Thousands of Falun Gong practitioners have died as a result of the persecution there, because the CCP fears losing its autocratic power.”

“Two volunteers come to the park on Colombo Street in Prato every Saturday morning from 10:00 a.m. to noon to practice this ancient Eastern cultivation practice for body and mind.”

The article explained that Falun Dafa is an advanced cultivation practice of the Buddha School, founded by Mr. Li Hongzhi in 1992. Practitioners aim to assimilate to the main characteristic of the universe, Truthfulness-Compassion-Forbearance, in their daily lives.

The report also discussed the Chinese regime's criminal acts of harvesting organs from living Falun Dafa practitioners for organ transplantation profit. It mentioned that Dafa practitioners in Europe had launched a petition for submission to the United Nations High Commissioner for Human Rights.

A signature drive for this effort was held on Colombo Street in Prato. The final petition, with 1.5 million signatures from over 50 countries, was submitted to the United Nations on December 9, 2013.

The article informed readers that the European Parliament had expressed concern about the ongoing persecution of Falun Dafa in China. The parliament passed a resolution on December 11, 2013, calling upon the member states to publicly condemn the CCP's forced organ harvesting crimes and demand an immediate release of all prisoners of conscience, including Falun Dafa practitioners.

“A Gentleman Is Rewarded for His Righteous Actions”