(Minghui.org) On August 27, 2013, the Falun Dafa Club at the University of Arizona participated in the fall Student Organization Expo. Practitioners hung up beautiful lotus flowers around their booth, which drew the attention of a lot of students. 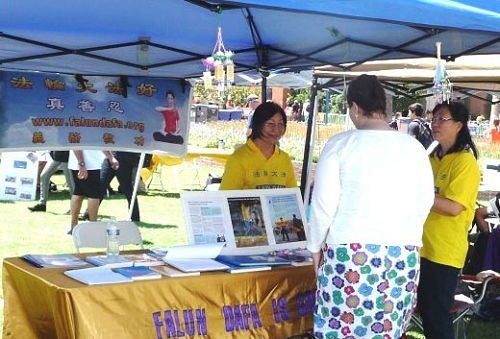 An American student who had just came back from a trip to China was shocked when he found out about the Party's crimes against humanity. He asked a lot of questions about Falun Gong and said that he wanted to join the on-campus club.

“We know the facts about Falun Gong,” said several Chinese students, “and we are not afraid to show our support for you. We all want to sign the petition!”

After they signed the form, they took a group photo with several practitioners wearing T-shirts with the words “Falun Dafa” on them. They said that they planned to share the photo with their families in China, so that they knew that anyone can practice Falun Gong in the United States.

One student walked up to the Falun Dafa booth and immediately signed the petition, saying that she had seen the same informational display while on a recent visit to New York. “Justice should be promoted and supported,” she said.

Many students said that the U.S. government should exert pressure on the Chinese regime and make public the information that it has on the CCP's crimes against Falun Gong.