The event on August 24 was held in front of the entrance of the Da'an Forest Park. Many people were shocked by the brutality of the persecution of Falun Gong in China. Passengers on buses took photos and videos, and drivers stopped to sign the petition.

Mr. Cai Shouren, a practitioner who coordinated the event, said that when he applied for the permit to hold the activity, the city government officials were very supportive, and wished the practitioners good luck.

Many tourists from China were surprised to see a group of Falun Gong practitioners holding a public event. Many of them stopped to talk to the practitioners and read informational materials. 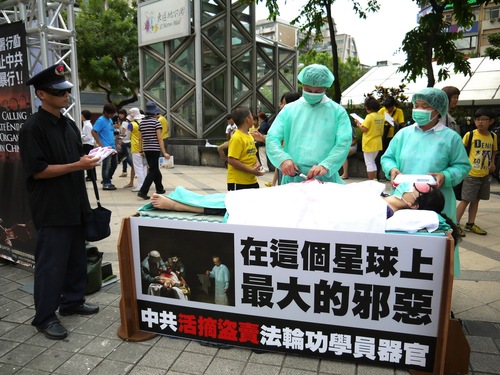 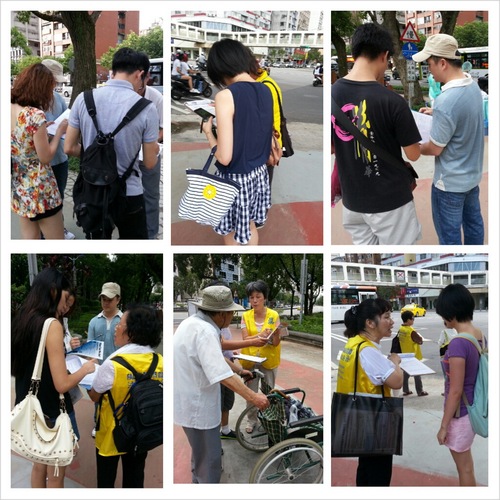 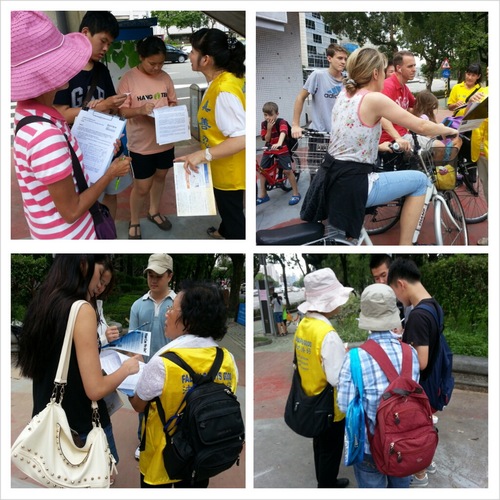 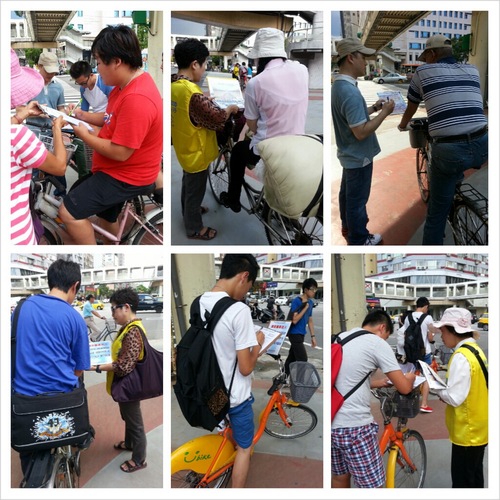 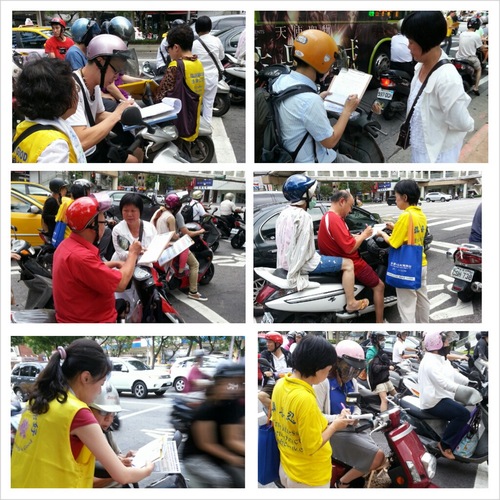 In the last 10 years, many Taiwanese have traveled to China for organ transplant surgeries. They were amazed by the “high efficiency” in China. Some Chinese doctors conduct more than 200 surgeries a year, and some patients were able to have more than one kidney transplant in a very short period. Many Taiwanese doctors suspected the existence of a large live organ bank for the market.

A 50-year-old local citizen told practitioners that one of his relatives had a liver transplant in China. At first, the hospital told him that there was no liver available. However, after he paid two million yuan , the hospital informed him that a liver that matched his blood type was ready.

Many people expressed indignation over the organ harvesting atrocities and encouraged practitioners to hold more public events. Some people suggested that the Taiwan government should pass laws to prevent illegal organ transplantation, and the Taiwanese media should report on this issue in depth.

Signature Drive in the Business District on Chunghsiao Tunglu Road 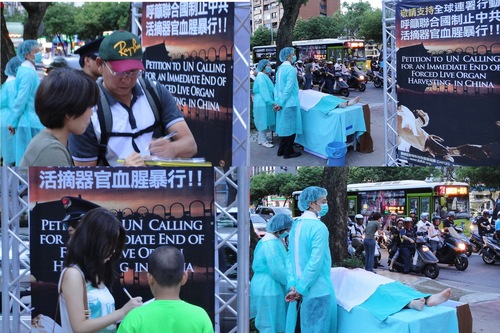 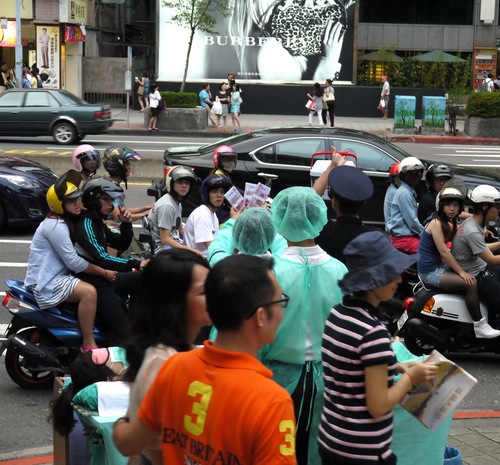 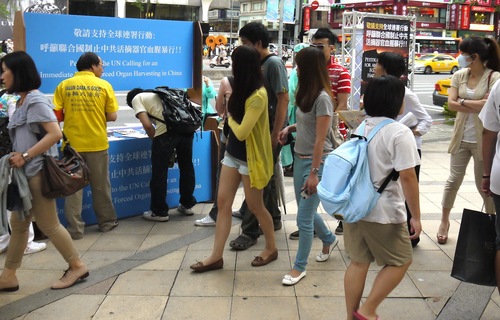 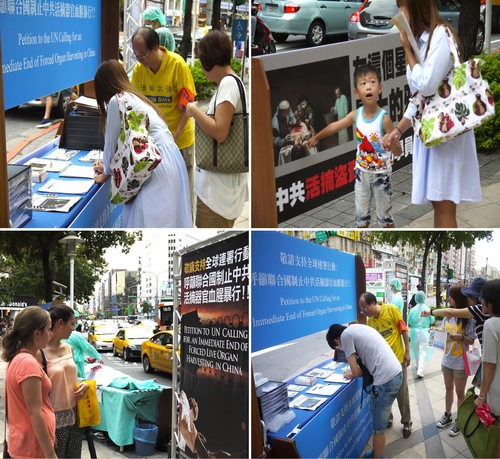 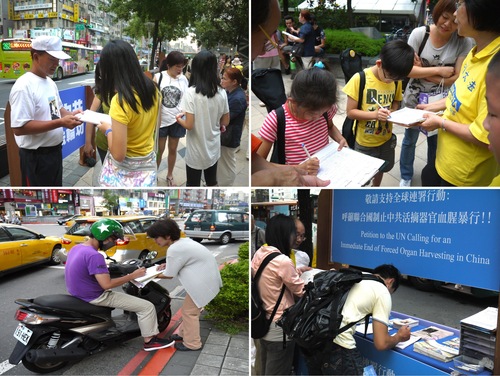 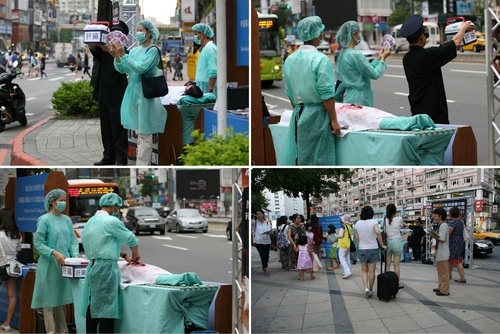 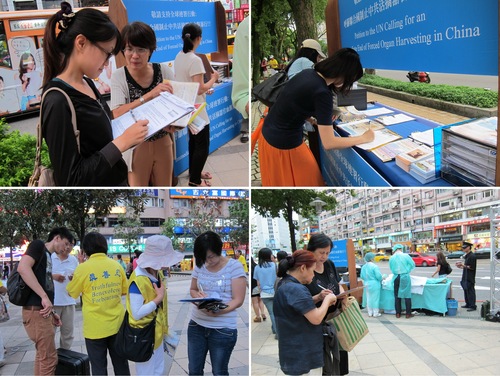 During the activity on Chunghsiao Tunglu Road on August 25, a 91-year old Chinese tourist told practitioners that he was persecuted by the Chinese Communist Party during the Cultural Revolution, and he knows that Falun Dafa has been unjustly persecuted. He took out his passport and asked practitioners to put his real name on the petition, showing that he was not afraid of openly speaking out against the Communist regime. Practitioners encouraged him to sign it himself. Although his hand was shaking, he wrote down his name slowly and carefully on the petition.

An elementary school child from China was shocked by the brutal pictures. He asked practitioners if it was true. After talking to practitioners, he decided to quit the Communist Youth League. “We don't like the communist party,” he said: “I want to quit the communist organization, because I don't want to be seen as one of them.”

During the event, many tourists from around the world learned about the persecution and signed the petition. Many of them took materials, and said that they would share what they learned with their friends and families.