(Minghui.org) The World Congress of Pharmacy and Pharmaceutical Sciences was held in the Convention Centre Dublin, Ireland, from August 31 to September 5, 2013.

Over 3,000 pharmaceutical and medical experts from around the world came together to discuss the growing complexity of patient care, innovative treatments and medicines, and cross-professional care.

Among the attendees were nearly 200 medical professionals from China, including many deans and senior medical personnel from the General Logistics Department of the military.

At the opening day ceremony, Falun Gong practitioners in Ireland distributed hundreds of copies of the 2013 special edition of Minghui International in English and Chinese. They also handed out beautiful paper lotus flower bookmarks with the words, "Falun Dafa Is Good" printed on them. Several hundred atttendees entered the conference hall with small lotus flowers and a copy of Minghui in hand. 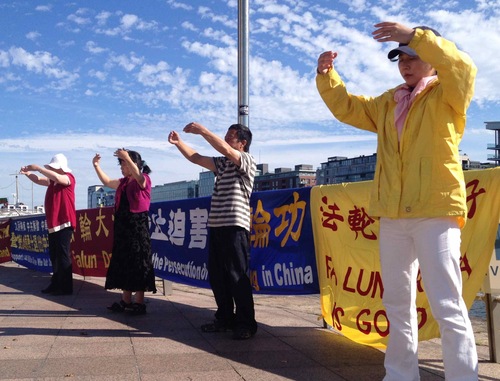 Falun Gong practitioners do the exercises outside the venue. 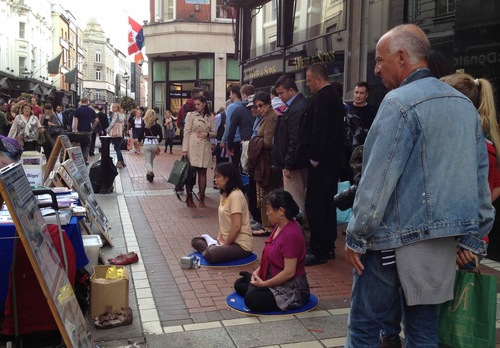 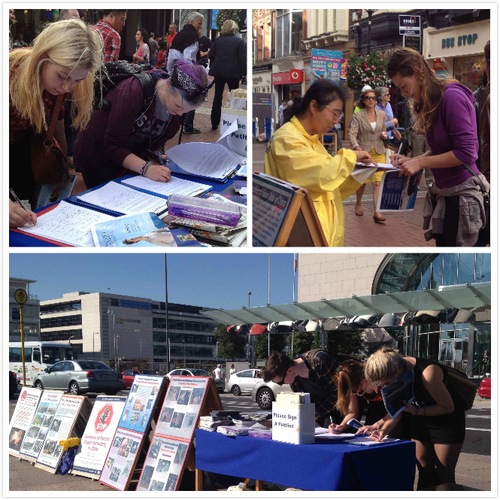 Many people sign the petition to end the persecution. 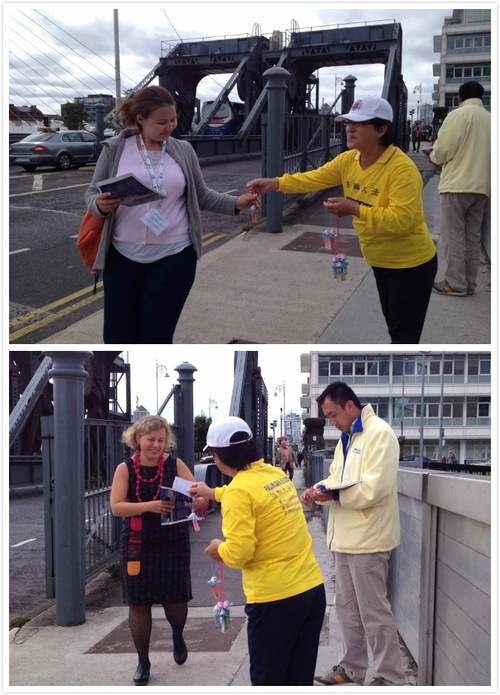 Since the CCP's practice of illegal organ harvesting was first made public in 2006, the Party has been trying to refute the evidence of its crimes, but to no avail.

Many Chinese medical professionals attended the conference, and practitioners made sure to reach out to them and let them know the facts.

One Chinese official said that he already gotten the information but did not know if it was true. Citing the book Bloody Harvest: Organ Harvesting of Falun Gong Practitioners in China, a practitioner explained, "Before 1999, there were only a few hundred organ transplants done in China each year. After 1999 when the CCP started to persecute Falun Gong, from 2000 to 2005, according to official data, within just six years there were more than 60,000 organ transplants. Where did this huge supply of organs for transplant come from?"

The official nodded and said, “It's difficult to explain those numbers. When I go back I'll read over the materials you've given me carefully.”

Some Chinese attendees were very interested in learning more about the organ harvesting allegations and even asked for informational materials to take back with them. There were also some who wanted to quit the CCP and its affiliated organizations.

Although a considerable number of the Chinese attendees did not dare to take the materials distributed by practitioners, several Chinese practitioners overhead the Chinese officials talking about what a bad reputation the CCP has around the world.

During the Dafa exercise demonstrations, many people came over to the practitioners' table to pick up fliers and sign a petition to help stop the persecution. Some even wanted to learn Falun Gong.

A pharmacist from Oman took a copy of Minghui with him. He not only read it very carefully, he also visited the FalunDafa.org website and read a lot of related information.

On the final day of the conference, a practitioner answered his questions about how to learn Falun Gong, then taught him the first and fifth exercises. The pharmacist said, “When I go home I'll watch the exercise instruction DVD and read the Dafa books.”