(Minghui.org) The 14th Russia Falun Dafa Cultivation Experience Sharing Conference was held on September 14, 2013. Falun Gong practitioners from all areas of Russia, including the Ukraine, Belarus and other parts of Eastern Europe, participated in this Fa conference. 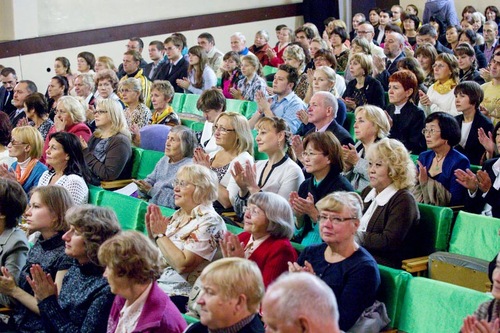 Sivader, a practitioner from Moscow, was the first speaker. He talked about how for the last few months, he's continuously clarified the facts of Falun Gong on Arbat Street. During this process he removed many attachments. In the beginning he had a lot of conflicts with some folk artists in Arbat Street and thought they were interfering with him. Gradually he realized that they're our “neighbors” near our information booth. He realized he first needed to tell them the facts of Falun Gong. They were people that need to be saved, not “interference.” After he realized this, he thoroughly clarified the facts of Falun Gong. He understood that clarifying the truth is also an opportunity to cultivate ourselves and assist Master to rectify the Fa. Sivader said that after he changed, the “neighbors” understood the truth and were eager to help. 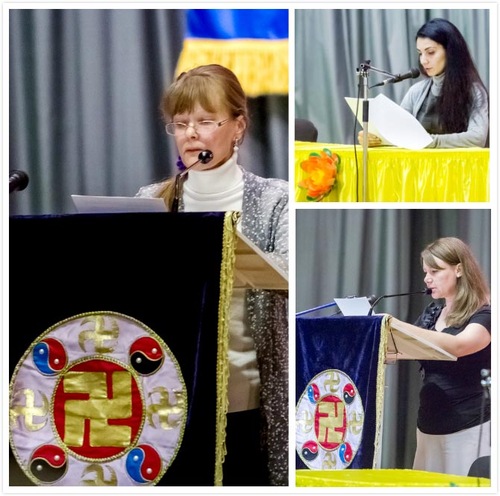 Practitioners exchange their experiences during the Fa conference

A Chinese practitioner, who was one of the first practitioners to come to Russia, told his story about how he spread the Fa in Russia in the early days. At that time, the only means of transportation was a small cart to transport Dafa books to other places. Carrying them in their hands, shoulder bags and pushing a small cart, a few elderly practitioners delivered a great amount of Dafa books throughout the entire expanse of Russia and the adjoining areas. They also took the train to Manchuria, Irkutsk and other places to give Falun Dafa books and materials to those who were predestined.

Irina from Rostov talked about cultivating herself while coordinating bringing “The Art of Zhen Shan Ren” artworks to Russia. She said that she identified and removed her conceit. She learned to look at fellow practitioners’ strengths, trust them, actively cooperate with them, and together to work towards a successful art exhibition, so as to spread the Fa and clarify the facts of Falun Gong. She said that by studying the Fa well and doing what Master asked well, the project ran smoothly and got better and better. Master would arrange for all the predestined people around you to be saved.

Almina from Kiev, Ukraine shared her experience of saving people in the Caucasus region. She was worried that Georgia and Armenia—her hometown—had no Dafa disciples. This thought echoed in her mind. When she decided to go there to let people know about Dafa, she felt enormous encouragement from Master. Carrying a heavy box filled with Master’s books and materials, she and another female practitioner always met kind people on the road who offered to help. Almina had no experience clarifying the facts of Falun Gong to high ranking officials, but when she entered the Georgian parliament building and walked into various government departments, she had no fear at all. They were greeted warmly. Most people didn’t know how Falun Gong was being persecuted in China and were very grateful to them. Her next effort is to promote the film “Free China” in the Caucasus region.

One Chinese practitioner who recently came to Moscow talked about how she and her child obtained the Fa and clarified the facts of Falun Gong. The second day after she arrived in Moscow, she went to Arbat Street with other practitioners to clarify the facts and encourage Chinese tourists to quit the Chinese Communist Party and its affiliated organizations. Seeing how practitioners in Russia have the freedom to do the exercises and distribute the materials at the information booth, and thinking of the persecution the practitioners in mainland China have suffered, she wept three times that first day. She realized that she needed to tell more Chinese people the facts of Falun Gong. Afterward she came to Arbat Street almost every day to clarify the facts. Some overseas Chinese brought her snacks, and some who learned the facts smiled genuinely at her. Sometimes she met other practitioners who came from China. She said: “Many times I've felt the difference between mainland China and abroad. But our Dafa disciples are one whole body, no matter where we come from, what nationalities we are. We are here only for one purpose, to save sentient beings, and assist Master in rectifying the Fa.”

Participants deeply felt that fellow practitioners’ sharing were compassionate and assimilated to Dafa. Everyone looked inwards and openly exchanged with one another, and all who attended felt they benefited greatly. 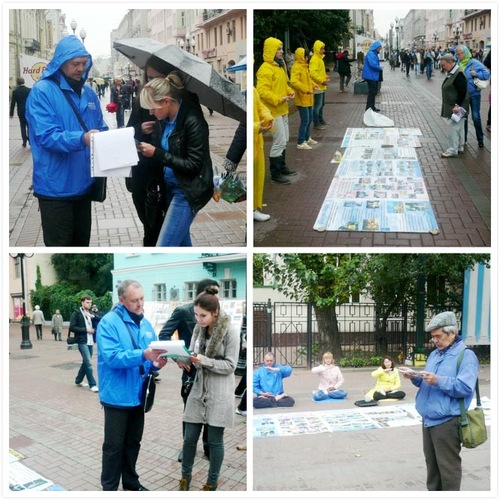 Practitioners clarify the facts of Falun Gong in Arbat Street

Before the Fa conference started, Falun Gong practitioners from different areas participated in many activities, including spreading the Fa in front of the Chinese Embassy, clarifying the facts about Falun Gong and exposing the persecution. Some practitioners clarified the facts to tourist groups in Arbat Street.

“We Should Not Give Up on Trying to Save More People”