Ukraine: Demonstrating the Beauty of Falun Dafa at the National Sports Festival (Photos)

(Minghui.org) On September 14, 2013, Ukraine held its annual National Sports Festival in Simferopol, the capital of the Crimea. Major cities throughout the country celebrate the event by organizing various sport activities to promote healthy living and fitness.

Falun Gong practitioners were invited to participate in the event by the city's Sports and Olympic Offices. 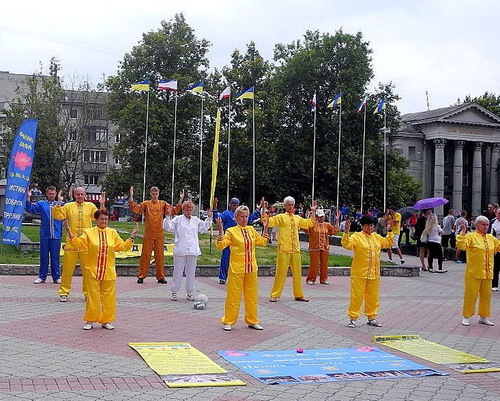 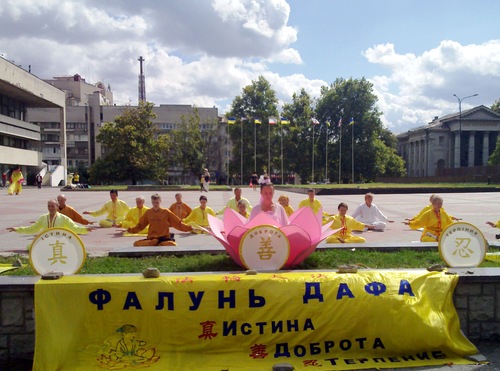 The event organizers introduced each group that participated in the festival. When it was Falun Gong's turn to be introduced to the spectators, the organizers warmly greeted the practitioners several times, and emphasized how effective the Dafa exercises were in improving one's health.

The city’s official website also featured photos of Falun Gong practitioners at the festival and reported that “Falun Dafa is an ancient Chinese exercise practice to cultivate one's mind and body through meditation and exercises.” The city's brief description presented a wholly different concept of health and fitness than any other form of exercise or sports at the festival.

Many groups stood quietly in a nearby theater and watched the practitioners demonstrate the exercises in the rain. Practitioners handed out small paper lotuses to passersby, exposed the Chinese Communist Party's (CCP) crimes against humanity, including organ harvesting of living Falun Gong practitioners, and collected signatures to help stop the persecution.

"My God, this is terrible,” exclaimed several people after finding out the truth, about Falun Gong. “I want to sign your petition!" Some tourists called the CCP's persecution of Falun Gong “wicked,” calling it “something that must be stopped.”

There were a handful of people who refused to believe that live organ harvesting existed. “In Ukraine, there are approximately 4,000 people per year who need kidney transplants,” a practitioner explained, “but out of the whole country, less than 100 people donated their kidneys.

“In addition, each year there are at least 600 pediatric patients who need kidneys. Ukraine kidney experts said that there was a long waiting list of patients who needed an organ donor, and that they had to wait many years to find a donor match.

“The U.S. Department of Health announced that the waiting time for an organ donor match was two or three years, while in China the waiting time was just one or two weeks. This indicates that there is a huge organ bank available at all times.

“This organ bank was made possible due to the millions of Falun Gong practitioners who were illegally detained when the persecution of Falun Gong began in July 1999. This is when China's organ harvesting scheme really went into full-swing. Most people who heard the facts understood and happily signed the petition.”

A Member of Parliament, who had just attended a wedding, stopped to read the display boards and watch the Dafa exercise demonstration. He then signed the petition. Before leaving, he gave the wedding roses that he had in his hand to one of the practitioners and said, "You will be successful!”

A man with sunglasses sat a little distance from the Dafa exercise demonstration and quietly watched. A practitioner approached him told him about the signature drive. He said he had known something about China's trafficking of human organs from his job, but he did not know that the whole state apparatus in China, from top to bottom, was involved in large-scale live organ harvesting.

"This is much worse than I ever could have imagined,” he exclaimed, as he signed the petition form. After pausing for a moment, he left one field blank, his profession. The practitioner asked him if he would mind filling in the field so that his entry was perfect.

“How should I fill it in?" he asked. The practitioner smiled, "If you are an official then you write down 'officer,' if you do business, then fill in 'businessman.'" The man said, "I am a division chief," then hesitated for a moment. He then filled in “National Security Agency," as his profession. "You are doing such a great thing,” he said before leaving. “I wish you success!"

Some passersby expressed a keen interest in learning Falun Gong and had long engaging conversations with the practitioners. Several people asked for a Dafa exercise DVD so that they could go home and start learning how to do the exercises.

“My Older Sister Is Reborn”

“Australia: Falun Gong a Welcome Fixture at the Toowoomba Carnival of Flowers (Photos)”