(Minghui.org) Falun Gong practitioners in China are being illegally arrested, incarcerated, and often mistreated because they practice Falun Gong, a Buddha-school cultivation practice banned by the Chinese communist regime in July 1999, despite the fact that China's Constitution provides its citizens freedom of spiritual belief.

Ms. Zhang Benjun, 52, is a Falun Gong practitioner who lives in Taoyuan New Community, Dongchuan District, Kunming City, Yunnan Province. She was arrested on July 24, 2013, and detained in the Bigu Police Station, where officers chained her to a chair during interrogation. They denied her food and the use of the restroom until she was released in the evening of the next day.

Ms. Zhang, who owns her own business, started practicing Falun Gong on October 28, 2004. She previously suffered from hypertension and a stomach disease, but has since become increasingly healthy. She has also improved her relationship with her husband by simply following the teachings of Falun Gong. She has shared her stories and introduced the practice to her friends, family, and customers. She has faced a litany of harassment and arrests since the regime began persecuting Falun Gong in 1999.

The following is a summary of her persecution, and the maltreatment she was faced with in 2013, because she is a Chinese citizen who insists on exercising her constitutional right of spiritual belief.

Police officers from Dongchuan Precinct broke into Ms. Zhang's home while she was out grocery shopping, early on the morning of July 24, 2013. Her father-in-law was alone at home. They ransacked the home and confiscated her collection of Falun Gong books, Minghui Weekly , photographs of the founder of Falun Gong, DVDs of Shen Yun Performing Arts (a popular overseas art troupe), videos containing Falun Gong lectures, Falun Gong amulets, and her personal computer. What would be considered as normal religious materials outside of China were considered criminal evidence relative to her arrest. Her father-in-law was coerced by the police to sign an unknown document.

Officer Zhang Kaili tried to arrest Ms. Zhang Benjun when she returned home at around 11:00 a.m. She protested, saying, “My father-in-law is 83 years old, and my child is only 11. They both need lunch. Where are you taking me? Who will cook for them?” When the police insisted on taking her away, she pleaded, “Neither of them is able to cook. I must at least make lunch for them.” Nevertheless, the police took her away.

She was put into one of two black sedans, which had no license plate. A police car then arrived and she was put into the police car. She said, “I didn't commit any crime. Why are you taking me to a police station?” They did not reply, and took her to the Bigu Police Station, where she was held. A police officer named Mao Jianhui wanted to know her name. She replied, “My name is Falun Gong practitioner.”

Mao became furious and started hitting the desk and the chairs. When Zhang smiled in response, he became all the more furious. Mao had a female police officer, Xia Yan, help him chain Ms. Zhang to a restraining chair. 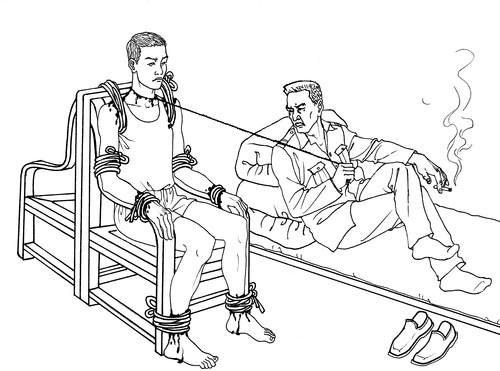 Torture illustration: Restrained to a chair

Denial of Food and Use of Restroom While Restrained and Interrogated

Zhang did not receive any food while in custody, nor was she allowed to use the restroom. Her family and friends arrived after 3:00 p.m. and demanded her release. When they saw her being bound to the restraining chair, they asked the officers to release her. She was then released from the chair. She was later given a little food, which her family had bought for her.

The interrogation continued after the police officers had finished their dinner. When Ms. Zhang refused to answer any questions, the officers put her back on the restraining chair. Xia Yan lost patience and shouted, “She can sue me any way she likes. I am not afraid. If she is not cooperating, handcuff her. Don't even think about letting her use the bathroom!”

Police officers, including Liu Shu, Hua Yu, and Mao Jianhui, took turns interrogating Ms. Zhang. She repeatedly asked to use the bathroom, but her request was denied every time. It was not until late that night that she was released from the chair and allowed to use the bathroom.

The next morning she was forced to give her fingerprints and sign documents.

Insulted, Shouted At, and Mistreated

The police officers there responded with many verbal insults, but Ms. Zhang remained impervious. She was taken outside and hung on a tree to expose her to the hot sun.

Xia Yan shouted, “Are you a Falun Gong practitioner? Why isn't your god saving you?” Xia shouted many epithets at her.

After she was finally released two hours later, she was taken into an office where her collection of Falun Gong books were scattered on the floor. This was designed to devastate her.

She was then taken to another room to be interrogated again, but she refused to cooperate, as she had not violated any law.

When Deputy Chief Liu Shu released her, Zhang asked for her Falun Gong books, but was denied. She pleaded with them a few times before she decided to return home with her family, who had come to pick her up.

Zhang and her son went back to the Bigu Police Station on the morning of July 29 to demand the return of her Falun Gong books, but an officer named Hua Yu told her that they had to scan them first before they could be returned to her.

Since her arrest, her father-in-law has been eating and sleeping very little, and the entire family is worried about him.

“Children Persecuted by the CCP”

“My Dream of Returning Home”