(Minghui.org) Zhengzhou Prison in Henan Province is a dark den that persecutes Falun Dafa practitioners. Not only do the guards torture practitioners, but the criminal inmates, instigated by the guards, participate in the persecution as well.

Falun Dafa practitioner Mr. Li Jie is one of the victims tortured there. Mr. Li, a teacher, has been illegally detained in the Zhengzhou Prison for his peaceful belief.

Mr. Li was initially detained in Division No.9, but then transferred to a division specifically set up to torture and “transform” practitioners.

Early one morning in January 2013, inmate Li Zhijun began to beat Mr. Li right after he got up. Mr. Li shouted loudly, “Falun Dafa is good!” Li Zhijun then dragged him to the bathroom and, together with several other inmates, continued to beat Mr. Li until he fainted.

The inmates then dragged him into a small cell.

The guards claimed that Mr. Li was “pretending to be dying” and shocked him with electric batons. They then put “death-penalty shackles” on him.

Afterward, they rewarded the hooligans who beat him.

“Death-penalty shackles” are used as a torture device. The victim's hands are cuffed to the feet. An iron chain conjoins the handcuffs and shackles. This device makes walking nearly impossible. The victim cannot dress himself, remove his clothes, eat, or lie down, and requires help when using the bathroom. 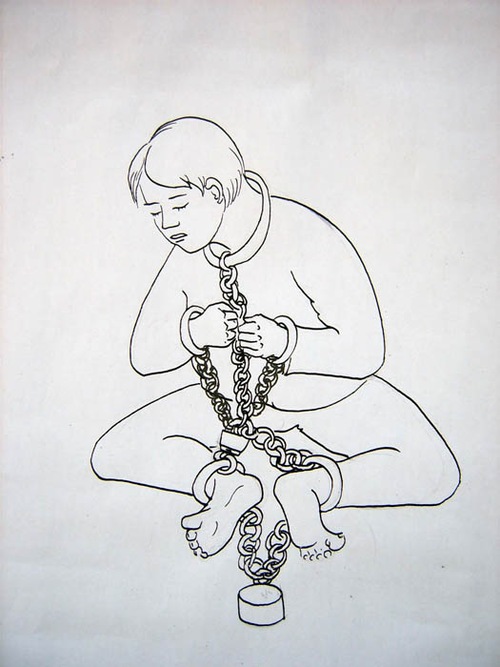 At present, Mr. Li is jailed in Division No. 3, where he is forced to do slave labor.

The guards have placed the “death-penalty shackles” on him many times. On several occasions, they made him work while wearing the shackles. Mr. Li staggered to the end of the work assembly in pain, while prison staff and inmates laughed at and abused him.

We appeal to all people of conscience to demand Mr. Li's, and all imprisoned Falun Gong practitioners', unconditional release.