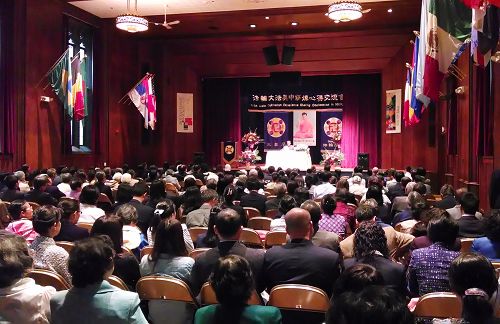 Speakers at the conference were from all walks of life, including a teenager, a man in his eighties, a college student, and professionals. The speakers came from a variety of cultural backgrounds as well, including Chinese, Chinese-American, American and Vietnamese.

Despite their differences in background, personality, and experiences, they shared in common a deep appreciation for the practice of Falun Dafa. In their papers, they talked about diligently removing their attachments and elevating according to the principles of Truth-Compassion-Forbearance.

One of the conference speakers, Ms. Xie, comes a remote college town in Northern Michigan. She said that although there aren't many practitioners in her locale, she tries her best to seek opportunities to introduce Falun Gong in her community. As she overcomes difficulties with her righteous thoughts, she also looks inward to remove her notions and attachments. She is also thankful of the precious opportunity to cultivate together and collaborate with fellow practitioners.

Mr. Chen from Ohio shared his experience of joining New Tang Dynasty Television (NTDTV) after producing news programs for over 10 years. He started from scratch to learn the technical skills. Finally, he coordinated and successfully produced a signature program of NTDTV: Chinese News. During the process, he had to overcome a lot of xinxing tribulations and failures. In the process, he grew from a naive student to a mature adult. His faith in Master and the Fa never changed, while his understanding deepened.

An American practitioner from Wisconsin, Sharon, shared how she discovered her rigid, impatient notions and attachments of longing for respect during the promotion of Shen Yun Performing Arts. She also shared a story about clarifying the truth about the persecution of Falun Gong to the aide of a state legislator. She realized that Dafa disciples should actively step forward, clarify the truth and take the lead. In carrying this out, she witnessed the power of compassion.

On June 27, two U.S. congressmen introduced Resolution 281, condemning the Chinese communist party’s atrocities of live forced organ harvesting from Falun Gong practitioners. Mr. Huang from Illinois shared in his paper about his efforts to collect signatures of support and call on congressional offices to take a stance against the crimes of the CCP. Mr. Huang talked about how he was able to relinquish some attachments and challenge his own limits in order to better inform the public and government leaders about the persecution of Falun Gong.

Sara, an American practitioner from Missouri, talked about organizing a screening of Free China: The Courage to Believe. In the process, she learned that putting in more effort to reach people personally was more effective in bringing in an audience. The event was successful, with a good turnout and very positive response. She also discussed personal cultivation issues, which she said may sound trivial, but that reflected her strong attachments. Sara realized the importance of seeing the seriousness of her attachments, not simply recognizing them, but having a sincere wish to let them go.

Working with young practitioners was precious opportunity according to Ms. Xiao from Illinois, who shared her experiences at the conference. As a Minghui school teacher and a parent of a young Dafa disciple, she knew that educating the young disciples well is one of the tasks given to her by Master, and that she should do it well. In the process of working with these children, she was inspired by their behavior, keen insights, and the improvements she saw in their character.

Audience member Ms. Liu says that she benefited a great deal from the conference talks as well as informal sharing with fellow practitioners throughout the weekend. She could sense the sacredness of practitioners coming together for the Fa conference.

Over 20 speakers in the course of the day displayed the process of elevation in cultivation through unique experiences and perspectives. Every member of the audience has their own cultivation stories as well. The conference was only a small glimpse of the magnificence of Dafa, one that some one hundred million cultivators around the world experience.