The Chinese Communist Party (CCP) appears to have acknowledged that abolishment of the forced labor system and incarceration without due process is finally at hand. However, most Falun Gong practitioners who were not detained in forced labor camps have been taken without due legal process to brainwashing centers or prisons. Brainwashing centers restrict personal freedom and persecute people in a more secretive manner under the misrepresentation of “legal education”.

For 14 years, forced labor camps have been utilized by the CCP regime as the main institutions to detain and persecute Falun Gong practitioners, as well as other groups who were subjected to brutal torture and slave labor. The following is a brief analysis of their operations.

In the first half of 2013, 445 Falun Gong practitioners were sentenced to prison, 186 taken to brainwashing centers for a total of 631, which was 45 times higher than those taken to forced labor camps. 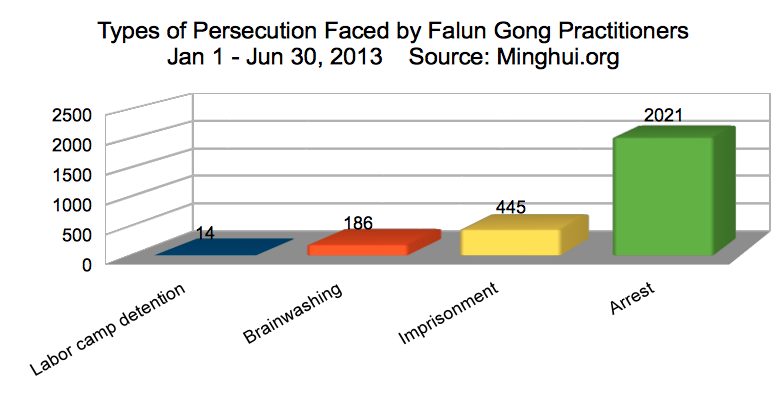 Take the Guangdong Province example; the number of people illegally tried and sentenced between January and July 2013 is significantly higher than those taken to forced labor camps.

During that period, only two practitioners were taken to forced labor camps, but nine were taken to brainwashing centers and ten others were sentenced to prison, including an 80 year-old senior citizen. The longest term given was eight years. The court tried 22 people without any justifiable evidence, and in excessive haste.

In Shijiazhuang, the number of practitioners sentenced to prison, taken to brainwashing centers or forced labor camps realized a steady increase between 2008 to 2012.

Based on the analysis of data received throughout China, the CCP has changed its method for persecuting Falun Gong practitioners, but the persecution has in essence, not changed.

Brainwashing centers operate under the false pretense of “legal education” or “learning classes”; some were in fact, set up by forced labor camps.

The 610 Office is an illegal suppression-of-opposition organization established on June 10, 1999 by the Jiang Zemin regime for the sole purpose of persecuting Falun Gong. Members of the 610 Office throughout China set up brainwashing centers under the guise of “legal education” to detain local practitioners, and those released from forced labor camps or prisons in order to force them to give up their belief.

In the first half of 2013, the 610 Office in 19 provinces, regions or cities managed brainwashing centers to persecute practitioners, with a total of 82 such centers at various levels. Practitioners were taken to these centers to undergo persecution, and were also forced to pay “education fees”. (Source: “Persecution Statistics in the First Half of 2013” by the Minghui website)

Most brainwashing center staff are plainclothes police officers. These centers are often decorated like guest houses, with TV sets and air conditioning units. However, they use the same means of torture to force practitioners to transform, including sleep deprivation, physical punishment, beatings, mistreatment, threats, etc. Although they don't carry police batons or handcuffs, they utilize various forms of torture instead, such as water suffocation, liquor suffocation, or denying access to toilets.

The 14 year-long persecution of Falun Gong is without legal basis. Practitioners were regularly placed on trial with false accusations and fabricated evidence. By law, citizens have the right to freedom of expression to make truth-clarification materials, but for years, they have been illegally sentenced by the CCP for this simple activity. Now, more and more lawyers are stepping forward to defend Falun Gong practitioners.

Qiu Liying from Shijiazhuang was sentenced to two years and six months in prison, charged with “revealing state secrets”, simply because she distributed a document which was being widely circulated on the Internet. Jia Zhijiang, also from Shijiazhuang, is facing trial for joining the mass support of Falun Gong practitioners. There are many similar cases throughout China. The police and domestic security departments monitor and follow practitioners' movements, then fabricate accusations against those they want to arrest, present false evidence and illegally sentence them to prison.

The dismantlement of forced labor camps is only a superficial formality, as many forms of persecution are still widespread including harassment and surveillance. The CCP has created an atmosphere of fear in China. Many practitioners are subjected to harassment, threats and surveillance at home, causing enormous psychological pressure and harm.

Some practitioners had previously suffered from terminal illnesses, but recovered through practicing Falun Gong. Under the persecution and the atmosphere of terror, they subsequently suffered relapses and died.