(Minghui.org) On September 7 and 8, 2013, a dramatic reenactment depicting the removal of organs from living Falun Gong practitioners was held near one of the busiest areas of Kaohsiung - Hanshen. Falun Gong practitioners explained the facts about the ongoing persecution in China to passersby and collected over 4500 signatures on a petition that condemned the forced organ harvesting atrocities.

A press conference was held on the afternoon of September 7. Doctors, professors, and others spoke up to protest the brutal crime against humanity. 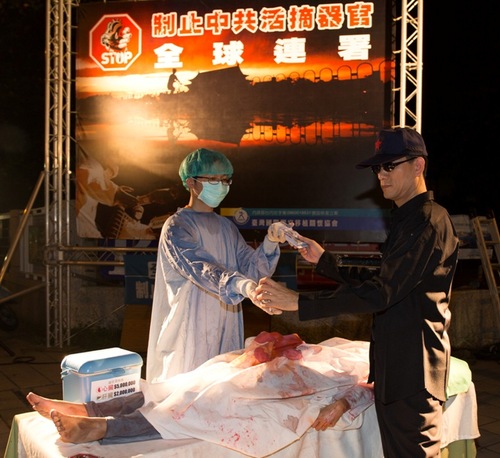 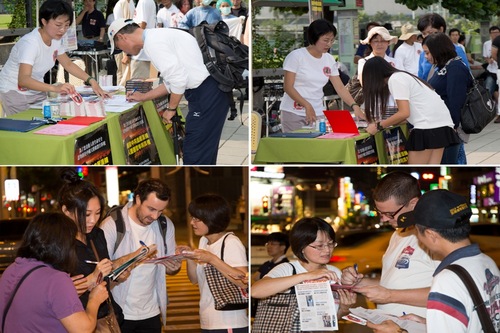 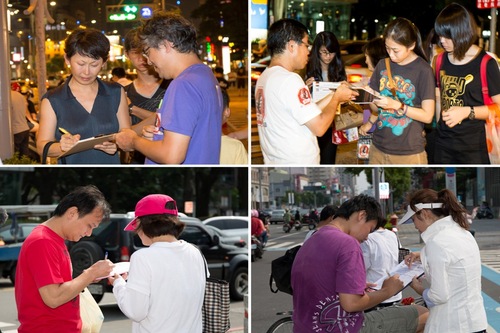 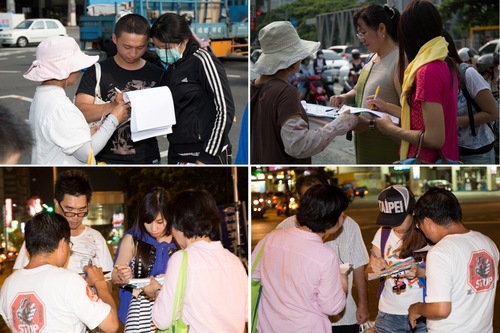 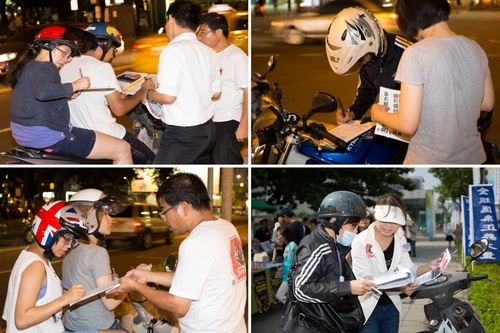 Falun Gong practitioners tell passersby about the persecution and ask them to sign a petition to help end it.

President of the Taiwan Association of Medical Technologists: "Laws Must Be Passed to Stop the Brutality"

Dr. Tsai Chung-Yi, President of the Taiwan Association of Medical Technologists, was shocked after watching the movie about non-consensual organ removal from living victims. He said, “When I had no idea where the organs came from, I believed those doctors were saving lives. Now that I know that they obtained the organs through such brutal and illegal means, I believe that many people in the medical profession like me will not tolerate it!”

Dr. Tsai asked those who plan to get organ transplants in China to look into their conscience: “Killing to prolong one's life is a brutal act--even heaven will weep over it. Most imprisoned Falun Gong practitioners were healthy young people and they had many years ahead of them. To sacrifice them just to live a few more years is an unthinkable brutality. Taiwan must make laws to stop such evil.”

Film Director Wants to Prevent the Tragedy from Happening Again

Wu Yung-Te, whose film “The Forgotten Declaration of Geneva” won the Golden Palm at the Mexico International Film Festival, said about his film: “It's based on eyewitnesses' accounts of organ harvesting from living Falun Gong practitioners. I hope that those who see or hear about this tragedy will do the most meaningful thing in their life - sign a petition asking the United Nations or the International Tribunal to help stop the horror and violence.”

President of the International Care Association of Organ Transplants

Dr. Hu Nai-Wen is the president of the International Care Association of Organ Transplants. He said that many people in Taiwan died not long after having organs transplanted in China. The chance of survival after getting organs in China was not high, according to him. “I had a patient who went to China to get a liver and a kidney transplant a few years back. He was in so much pain after returning to Taiwan and came to see me. I asked him whether he knew where his organs came from. He cried after I told him. He terribly regretted what he had done.”

Young Doctor: "I want to protest!"

Dr. Cheng Yuan-Yu told a story to show that organ harvesting in China was real. “When I was an intern, I cared for patients who had gotten kidneys in China and then gotten infections after returning to Taiwan. The attending physician at the time told me that organs were so abundant in China because there were so many death row inmates and there are no human rights. If you accidentally dropped a kidney on the floor, it was not a big deal, just get another one.”

Dr. Cheng said that he once believed that organs from death row inmates should be used to save people. After he read the books Bloody Harvest and State Organs , he was shocked. “I had been deceived by the Chinese Communist regime for so many years! It is beyond cruel. Today I want to sign the petition to protest!”

Citizens Petition to Condemn the Crime of Organ Harvesting

Lin Chi-Tsai is a special assistant to councilor Huang Po-Ling and had learned about organ harvesting in China from television and magazines. “It is inhuman and should not be happening. I'm glad that this dramatization will help more people realize this ugly fact.”

Mr. Chang is a retired middle school teacher. He said that people must understand that getting organs from unidentified sources is the same as killing Falun Gong practitioners. “A coworker of mine listened to his doctor and went to China to get a kidney transplant. He felt awful after returning to Taiwan. Shortly after he died of four different cancers.”

Mr. Cheng, the owner of a funeral home, came by and signed the petition. He's seen many death certificates in his line of work and said, “One main cause of death I've seen is rejection after getting an organ transplant in China. Most of them only live five years after the transplants. The organs cost from US$7000 to US$50,000. I knew that the Chinese regime was killing Falun Gong practitioners in this lucrative trade.”

A hospital volunteer said that she finally understood why there was such an enormous organ pool in China--it's Falun Gong practitioners. She talked about a patient who kept coming for kidney dialysis. “She was told that there was kidney available for her in just a few days. After she came back from China, she did not need dialysis for a while. Then her body rejected the organ two months later and no medicine helped. Within a few days, she died. Now I know what happened.”

“Supporting and Believing in Falun Gong Protects During Calamities”