The conference started at 9:00 a.m., with 21 practitioners sharing their cultivation experiences. The main topics covered in the talk included how to eliminate the attachment to self, how to sincerely look within when problems arise, how to effectively get rid of negative thoughts, and how to improve one's relationships with fellow practitioners. All of the speeches were simultaneously translated into seven languages.

All of the prepared talks shared the same view, that only by studying the Fa well can we understand how to cultivate ourselves well, and only if we cultivate ourselves well, can we hope to save sentient beings. The practitioners who spoke thought that all practitioners, including coordinators, should be willing to put down their egos and take responsibility for their actions.

Every project that practitioners are involved in will provide opportunities to cultivate. If practitioners really want to do a project well, it should be done according to the principles of Truthfulness-Compassion-Forbearance, without human notions and attachments. In this way, practitioners will move along the path that Master has arranged for each one. 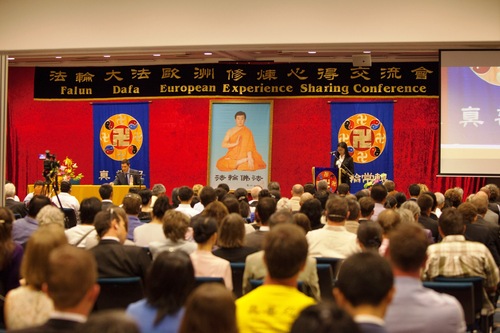 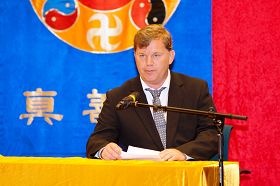 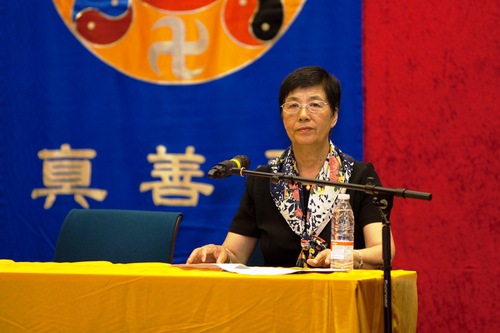 A New Practitioner Learns to Look Within

A new Ukraine practitioner said that as soon as he started to cultivate, he realized the importance of looking within. “I was really surprised,” he said. “The more I looked within, the more attachments I found. All those attachment have to go. Initially, I felt very bitter in my heart when I realized how many attachments I had. However, I eventually understood the importance of looking within and was deeply moved."

His sharing reminded other practitioners at the conference to cultivate with the heart that they once had when they first took up the practice.

I Constantly Remind Myself, “Forget the Ego, Just Save People!"

A German practitioner shared her experience of participating in the 2013 Shen Yun promotion in France. After removing some of her human attachments, she was better able to feel Master's caring compassion. When she listened to others' sharings, she looked inward and found where she fell short. She previously had unrighteous thoughts towards others, and found it difficult to see the good qualities of others when they weren't friendly towards her.

She recounted the steps that she took to eliminate her attachments during the Shen Yun promotion.

"When I began to look inward,” she said, “I found that I was too concerned about the end result of whatever I was doing. Basically, I only focused on achieving my own goals. When it seemed like I might not achieve what I set out to do, I became disappointed. This is clearly an indication of me trying to validate myself and being attached to fame and reputation.

“I told myself that I must get rid of these attachments and not be so driven by my own self interests. Instead, I should focus on what I have to do. The following day, I kept reminding myself, 'Forget the ego, just save people!'"

As a Coordinator it is Very Important to be Modest

"As a coordinator it is very important to be modest," shared a practitioner from Spain. He said that only when he looked inward did he realize why so many fellow practitioners had not gotten involved with the Spanish edition of the Epoch Times . For the first time, he realized that his negative thoughts towards fellow practitioners directly influenced the project and caused a separation among practitioners in other dimensions.

He thus added a thought while sending righteous thoughts, “Eliminate all negative thoughts towards fellow practitioners!” Over the course of the next few months, whenever a negative thought came to mind, he did his best to eliminate it. He increased his efforts to do the three thingswell and put cultivation first, above all else. He gradually found that he had become more focused while studying the Fa and sending righteous thoughts, and that he did the exercises more frequently, too.

"All of these changes have led me to rediscover myself," he said. "My understanding and compassion towards fellow practitioners has gradually grown, which in itself is very powerful, and was enough to immediately disintegrate all evil elements that had formed a separation among practitioners in our group. The responses of fellow practitioners towards my new outlook were very positive. My innate goodness directly changed other practitioners' hearts, without me consciously having that desire or wish. The words I used to express myself were the same, the only difference being that my heart had changed."

Only if We Coordinate Well, Can We Do Well in Saving Sentient Beings

A practitioner from Latvia shared his experience in organizing The Art of Zhen, Shan, Ren International Exhibition in his city. While making phone calls to secure a place to host the exhibition, some of his attachments inevitably surfaced. Once he recognized them, he abandoned them. "If we work together on a project," he said, "we must collaborate well. If we collaborate well, then the mighty power of Dafa will manifest, and our project will surely succeed."

A practitioner from Spain shared her personal experience of believing in Master and the Fa while working on The Art of Zhen, Shan, Ren International Exhibition. " After thinking things through," she said, "I understood that Master does not require anyone of us to be an expert in every field. It is more important that we have the righteous thoughts of cultivators and use our innate wisdom. Although we might not think that we are very competent in what we do, we can still try our level best. Only if we try hard to get rid of our human attachments, believe in Master and the power of fellow practitioners, will our project be truly successful."

Clarifying the Truth to Politicians

A couple from Germany shared their experience together on stage. They talked about the wisdom that they both gained during the more than ten years of clarifying the truth to politicians. They realized that the more attachments they eliminated, the stronger their righteous thoughts became, and it thus became easier to save sentient beings.

"Every time we talk with a politician," said the wife, "we broaden our ability to effectively clarify the truth to all politicians. We realize that it is very important to let them know some of the basic facts about Falun Gong, such as what Falun Gong is, why Falun Gong is being persecuted, the current situation of the persecution, and the evil nature of the Chinese Communist Party (CCP). We also understand that when we discuss issues with politicians, we should directly address any negative views they may have about Falun Gong and disintegrate them. When we explain to them that their misunderstanding about Falun Gong stems from the Party's propaganda and lies, they quickly get the whole picture."

Ms. Pan has been clarifying the facts at different tourist sites in Switzerland for the past eight years, rain or shine. She hands out DVDs of the Nine Commentaries on the Communist Party, talks to people about Falun Gong, and persuades people to quit the CCP and its affiliated organizations. She said that she feels the urgency to complete her mission of saving sentient beings, and that studying the Fa is essential to that end.

Master said in "Be More diligent," "A Dafa disciple’s righteous thoughts stem from the Fa..." The more that Ms. Pan kept these words in her mind, the easier it was for her to find time in her schedule to study the Fa, and thus the easier it was for her to rectify herself every moment. In this way, she was able to have a compassionate heart towards everyone she met. She also found that by maintaining righteous thoughts, she was able to more effectively save sentient beings.

Clarifying the truth face-to-face requires both wisdom and mental flexibility. She said that every Chinese person who we talk to about Falun Gong and why they need to quit the Chinese Communist Party, requires us to continually adapt ourselves to different personalities with varying backgrounds.

Ms. Pan has persuaded about 40,000 people to quit the CCP since 2008, including professors, engineers, provincial secretaries, high-level military officers, ministers, senior officials, police officers, and 610 Office personnel. Most of them quit the Party from the bottom of their hearts. Some of them even left their business cards with her, hoping to keep in touch with her.

A practitioner from Britain shared her experience of working on the Phone China Team, using the RTC platform.

"Fa study is fundamental to everything we do,” she said. “Only by studying the Fa well can we progress smoothly along the path arranged by Master, pass the tests that we encounter, negate the old force's interference, and do the three things well.

"Thus, every day I do my best to increase the time I study Zhuan Falun and Master's other Fa teachings. As I study the Fa, I feel as if every cell of my body is absorbing the Fa's power, and gradually I feel the calm and happiness of being in the Fa."

The practitioners who attended the one-day experience conference shared that listening to fellow practitioners' experience sharing really helped them a lot, and made them realize their various shortcomings.

A practitioner from Germany, who has attended the last seven Fa conferences, was asked what she found most helpful about the conference. She said that every speech seemed directly related to her cultivation, and made her more aware of her hidden attachments.

Three young female practitioners from France, who have been practicing for about two years, said that listening to the sharings made them clearly see the gaps in their cultivation. They all thought that they should use their time more wisely to clarify the truth.

Ms. Zhu, who was brutally persecuted in China, said that she feels a growing sense of urgency to save sentient beings, and emphasized that we should use every available minute to do just that.