(Minghui.org) A torture method employed by Quiwen District Communist Party School in Weifang City, Shandong Province is to tie a practitioner to a steel chair and put the person in a steel cage. 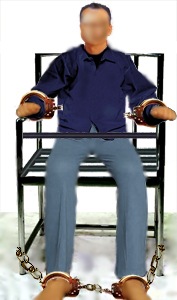 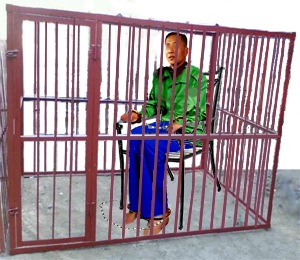 Torture illustration: Confined To Steel Chair in A Cage

Most people in China who travel by train know how hard it is to sit in those hard seats for two whole days. To be tied to a steel chair around the clock for days, sometimes up to more than three weeks, is unfathomable suffering. To make things more unbearably painful while chained to the chair, practitioners are also locked in a cage and barred from sleep for more than 20 days. At the same time, they are being interrogated and tortured.

Kuiwen District Party School hosts a brainwashing center used by the 610 Office and police. Throughout the year, more than a dozen policemen are on duty on a daily basis to conduct these tortures. Police from different branches come to interrogate, force-feed or inject practitioners with unknown substances. These police also supervise and teach lower level brainwashing sessions in towns and counties within Weifang.

On February 28, 2012, Kuiwen District police and officers from Dayu Police Station arrested 68-year-old Ms. Jin Changlan and sent her to Weifang Brainwashing Center. Quiwen 610 Office head Gao Xingchang and a few other officers intimidated Ms. Jin causing her to suffer high blood pressure, a seizure and a heart attack. When the emergency vehicle arrived, the EMC technician reprimanded, “Why did you call us so late?” Gao did not dare to say a word. After she returned home, Ms. Jin's health rapidly declined. As a result, she passed away on May 31, 2013.

Zhao Yongjun is a hired thug who is in his 50’s. He actively participates in all cases against practitioners and is ruthless. Every time he tortures practitioners, he always reports the results to Gao asking for recognition and reward. Gao’s main job is to arrest practitioners and extort money from their loved ones. Zhao helps Gao with torture tactics and personally tortures people. 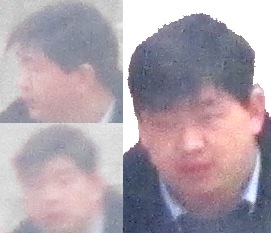 “Embodying Dafa's Principles at Work and Truly Improving from Within”

“Saving People with All My Heart”