Falun Gong practitioner Mr. Yang Naijian from Qingdao City, Shandong Province, disappeared after he was arrested by agents of the Chinese communist regime on May 2, 2013. A fellow detainee said that Mr. Yang was tortured and hung up for three days and nights in the detention center and was now emaciated. Mr. Yang's family are very anxious about his safety. 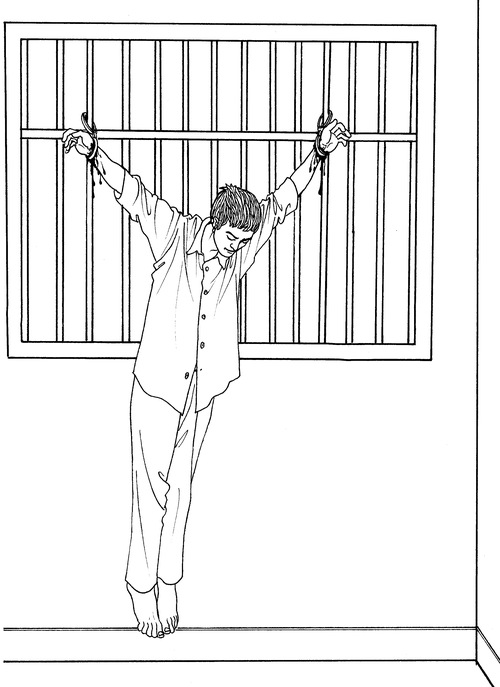 Over 80 people from the local police station and public security bureau, acting on orders from the Qingdao 610 Office, broke into Mr. Yang Naijian's house in Xinugushan Village and arrested him, his parents, and over 10 relatives.

It was reported that the arrests targeted practitioners involved in taking pictures of torture techniques used in prisons, forced labor camps, and detention centers to document the persecution of Falun Gong.

The following describes what happened in Xinugushan Village on May 2, 2013:

At 2 p.m. Mr. Yang Youxin, Mr. Yang Naijian's father, heard someone knocking at the door. When he opened it, a swarm of plainclothes agents attempted to barge into the house. Mr. Yang tried to hold them back, but one of the agents pushed him aside and said, “We're here from the city police department.”

Ms. Liu Xiuzhen, Mr. Yang Naijian's mother, was doing chores in the backyard. She had just finished preparing the food for the guests, who hadn't eaten yet. When she saw the agents running up the stairs and kicking the doors of her tenants, Ms. Liu yelled, “You're acting like bandits! What do you think you are doing here?” One of the agents who looked like he was in charge said, “Take her away!” The others ran over to her and started beating her. She had bruises all over her arms. They pushed her into the police van and took her away.

Ms. Liu Xiuzhen's son, Mr. Yang Naijian, who was preparing to go to teach a class at the time of the arrest, was tied up with a rope that cut into his flesh.

The agents ransacked the Yang family household and took all their Falun Dafa books, MP3s, cassette players, DVDs, Mr. Yang Naijian's wallet, ID card, driver's license, bank card (which had about $10,000 in the account), and cash.

On the day of the arrests, one of Mr. Yang Naijian's aunts, Ms. Liu Xiufang, had come to visit her oldest sister, Ms. Liu Xiuzhen, at her house. When the agents broke, they started pushing her around and hitting her, bruising her arms.

Amidst the chaos Ms. Liu Xiufang recognized the agent giving instructions. She had seen him in Dongshan Botanical Gardens at about 9 a.m. that morning. Ms. Liu Xiufang believed the arrests were premeditated.

The agents arrested Ms. Liu Xiufang; her husband, Mr. Jiang Dunsheng; her son; and daughter-in-law and took them to Liutingnugushan Border Police Station.

Mr. Yang Naijian's third aunt, Ms. Liu Xiuzhi, and her husband went to see her mother on the day of arrest.

After the agents broke into Ms. Liu Xiuzhen's house, they tried to take Ms. Liu Xiufang's son, Mr. Jiang Yongyong (who is a non-practitioner). In protest her niece Ms. Liu Xiuzhi tried to stop the arrest. One of the agents grabbed her hand and twisted it behind her back, and then kicked her from behind. Ms. Liu Xiuzhi's hand swelled up and ached.

Meanwhile Ms. Liu Xiuzhi's 78-year-old mother, Ms. Han Zhengmei, also tried to stop the arrest. Deputy captain Li Bin grabbed her by her hands and dragged her 200 meters away, ripping her clothes and bruising her arms. Her legs and buttocks swelled up.

The brutal, unwarranted arrests aroused public indignation. When Ms. Han's daughter-in-law went to pick her from the ground, she also got arrested. 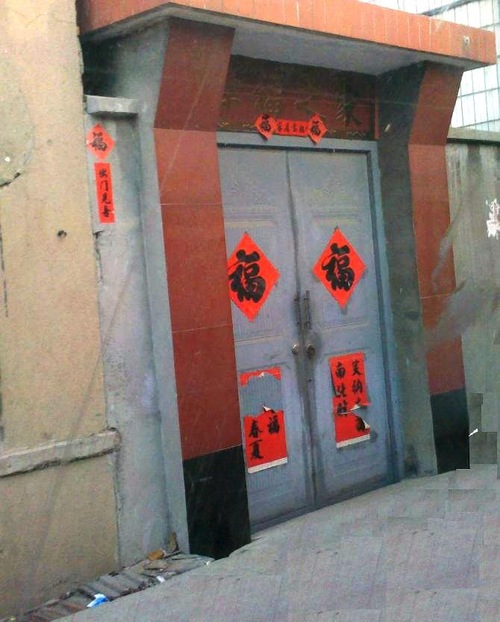 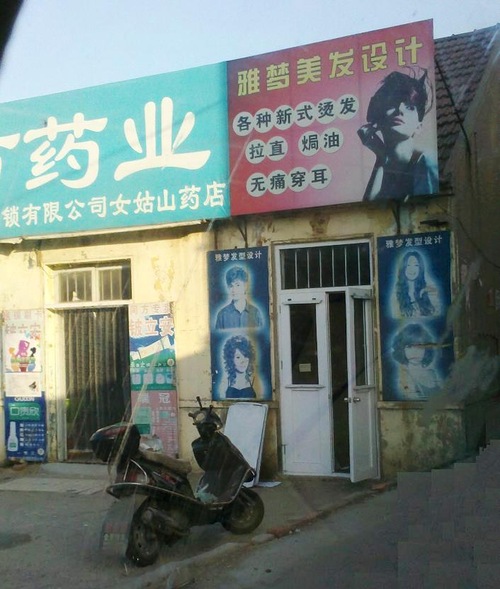 Agents entered this barbershop to make the arrests

2. Aftermath of the Arrests

The agents arrested Ms. Liu Xiufang and her family (husband Mr. Jiang Dunsheng, son Mr. Jiang Yongyong, and daughter-in-law) and took them to Liuting Border Police Station. When the agents ordered Ms. Liu to sit on a chair with a pair of shackles affixed to it, Ms. Liu said, “I am not a criminal. I won't sit there.”

Ms. Liu Xiufang's son and daughter-in-law were released the same day they were arrested.

Ms. Liu Xiufang's husband, Mr. Jiang Dunsheng, was taken to a cold cell and held for 24 hours. The agents warned him, “If you don't answer our questions, we will send you to the detention center.” The agents extorted $5,000 from his family before releasing him.

Mr. Jiang Dunsheng was summoned by the agents on May 14 and 22 after he was released and held in a police station for another 24 hours.

Ms. Han Zhengmei's legs were injured when she was dragged away and hadn't recovered as of June. She needs to stay close to heat to alleviate the pain.

One of the agents attempted to take a picture of Ms. Liu Xiuzhi. When she refused to cooperate, he said, “If you don't want me to take your photo, leave your fingerprints.” Ms. Liu Xiuzhi said, “I am not a criminal. Why should I give you my fingerprints?” He approached her, and Ms. Liu Xiuzhi said loudly, “What do you want? Don't you touch me! Open that door! I will tell all my relatives how you have treated me. Good and evil will receive their dues.” Ms. Liu Xiuzhi was detained for two days and nights.

Agents from the Shuiqinggou Police Station on Nanfeng Road arrested Mr. Yuan Shaohua. Even though he had high blood pressure (which reached to 270), he was still taken to the Pudong Town First Detention Center in Jimo.

They ransacked his house and confiscated his son Yuan Yang's computer on May 3, at 11 a.m. They warned Yuan Yang, “Do you know your father is in our custody? Have you ever tasted electric shock? Should I let you taste it now?” Yuan Yang said, “I am not a bad person. Why should you shock me?” Yuan Yang was traumatized by the threat and didn't dare to return home at night.

Ms. Liu Xiuzhi found out her that husband, Mr. Yuan Shaohua, was sent to Pudong Town First Detention Center after she returned home. She is very concerned about him.

Because Ms. Liu Xiuzhi and her husband's property (driver's licenses, ID cards, an F3 Audi worth $70,000), debit cards, shopping cards, and cash ($1,300) had confiscated, she had no money left and had to borrow money just to pay their bills. Ms. Liu Xiuzhi, her son, and mother-in-law went to the Shuiqinggou Police Station to reclaim their belongings, but to no avail.

Ms. Liu Xiuzhi, her son, and nephew again went to Nugushan Border Police Station to demand the return of her personal items. Agent Sheng Shihui said, “I am processing it now. I'll return everything to you after I finish.” She asked him, “Who gave you the right to confiscate my private property?” Sheng said, “We have no right, but I must finish processing your case before returning them to you.” Anothr agent asked, “Who gives you the right to practice Falun Gong?” Ms. Liu Xiuzhi said, “Practicing Falun Gong is a legitimate right for all citizens. We all have religious freedom.” Ms. Liu and her son went back to Chengyang Branch Public Security Bureau in the afternoon to ask for the return of their personal belongings, but were not successful.

Mr. Yang Naijian's mother, Ms. Liu Xiuzhen, was beaten when she was arrested on May 2, causing bruises all over her arms. She was subsequently taken to Nugushan Border Police Station and kept there after a physical. She was later transferred to the Pudong Town Third Detention Center in Jimo, Qingdao City.

Several agents from the Qingdao Chengyang Branch Police Station broke into Mr. Yang Youxin's house to get him to sign a document on May 13. He wasn't home at the time.

Four agents from the Nigushan Border Police Station intruded into Ms. Yang Youxin's son's house and warned his family on May 14: “Tell Yang Youxin to stop by the police station. I'll give you 2 days or I'll start arresting every one of you.”

After the agents left they went directly to Mr. Yang Youxin's factory to find him. They harassed the employees and didn't allow them to make phone calls or move around. They took Mr. Yang Youxin's time card and left.

Mr. Yang Youxin went to Liuting Border Police Station on May 15 at 9 a.m. Agent Zhao Liang asked him about the torture reenactment photos. Agent Li Jianguo from Xiazhuang Police Station started cursing Mr. Yang. They extorted $5,000 from the Yang family before releasing him.

Agent Zhao Liang from the Liuting Border Police Station and another agent from the Chengyang Public Security Bureau went to Mr. Yang Youxin's factory and took him to the police station on May 24 at 8 a.m. Captain Wang Mingjie interrogated Mr. Yang about the torture re-enactment photos. They released him at 6 p.m, tha day, and ordered him to return to the Liuting Police Station the following day.

Mr. Yang Naijian was transferred to the Chengyang Police Station of Xifu Town following his arrest on May 2.

Mr. Yang Naijian is known for his kindness. He loved to help people. He was a great teacher and loved by his students who had good grades. He treated his students very well. His students' parents also spoke highly of him. His students and their parents were shocked and in disbelief after he was arrested. They hoped Mr. Yang would come back to them soon.

3. The Communist Regime Does Not Want the World to Know How Evil It is

The Chinese communist regime is extremely fearful that people will discover just how evil it really. To prevent Falun Gong practitioners' lawyers from defending them, the authorities changed their charges against practitioners from “using a cult to undermine the enforcement of the law” to “leaking state secrets and subverting state power.” Ms. Lu Xueqin's family hired a lawyer to defend her. When her lawyer went to see her in the detention center, he was denied entry. The lawyers hired for Cui Luning, Yang Naijian, Liu Xiuzhen, and Li Hao experienced the same difficulty. The excuse the agents used to fend off practitioners' lawyers was, “They leaked state secrets.”

The truth is the truth. Regardless of how the Chinese Communist Party (CCP) struggles to conceal its persecution of Falun Gong, it is futile. It cannot cover up the facts of its crimes of genocide. The CCP's days are numbered.

Mr. Liu Hongji from Qingdao City, Shandong Province Passes Away as a Result of the Persecution While His Whole Family Continues to Suffer Abuse (Photo)

Police Fabricate Charges Against Ms. Cui Luning and Others in Qingdao City

“Why Do We Practice Cultivation?”