Who Is Behind the Crimes Committed by the “Legal Education” Facilities?

(Minghui.org) Several human rights lawyers went to the “Legal Education Center” in Ziyang City, Sichuan Province on May 13, 2013, where they were arrested and several of them were beaten up by thugs. They were released after being detained for 24 hours. This “Legal Education Center” is notorious for detaining and torturing Falun Gong practitioners. According to the human rights lawyers, it's the largest “black jail” in Sichuan Province. 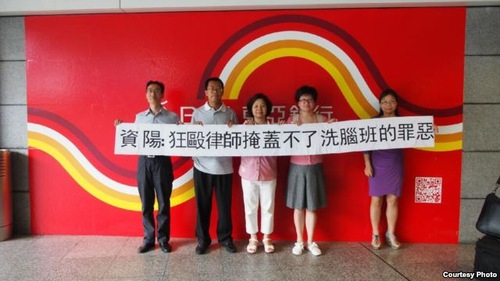 One of the lawyers said, “From the outside, this ‘Legal Education Center’ looks like a vacation villa, but as a matter of fact, it’s a notorious brainwashing center and the crimes that have been committed inside pile up to be high as a mountain.” It's located inside the Erer Lake Villa in Yingjie Town, Yanjiang District in Ziyang City. This is the infamous “Erer Lake Brainwashing Center.”

After the persecution of Falun Gong practitioners began, a large number of these “Legal Education Centers,” “Legal Training Institutions,” and “Legal Education Foundations” appeared all over China. By their titles, people may assume that these organizations are educational institutions. To the contrary, these “legal education” organizations were specifically established to brainwash Falun Gong practitioners and force them to renounce their belief.

For more than a dozen years, the Minghui website has collected thousands of brutal persecution cases conducted inside these government-run facilities.

So who is behind these “Legal Education Centers?” None other than the 610 Office, which was established by Jiang Zemin after he decided to launch the persecution of Falun Gong on June 10, 1999. 610 Offices are found everywhere in China, in all levels of the Chinese Communist Party's (CCP) Central government as well as at the provincial, municipal and other levels. The primary goal of the 610 Office is to instigate the legal system to persecute Falun Gong practitioners. To cover up the persecution, the CCP seldom mentions 610 Office-related matters in its public announcements or documents, but we can still find links that join these “legal education” facilities and the 610 Office. 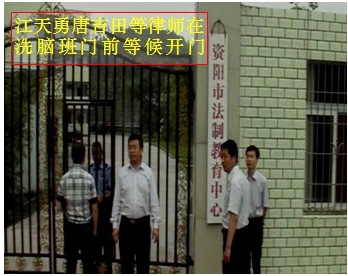 More than 200 Falun Gong practitioners were detained in “Erer Lake Brainwashing Center” during the Chinese New Year season in 2013. Erer Lake Brainwashing Center is directly responsible for the death of at least three practitioners. They are Mr. Wu Yihua, a family physician who died at the age of forty-eight; Mr. Li Huabin, a resident of Xinhe Township, Jianyang City, Sichuan Province, in his seventies; and Ms. Zhao Yuxia, a factory worker from the No. 4 Plant of 431 Factory of Ziyang City, Sichuan Province, who died at the age of fifty-two.

Erer Lake Brainwashing Center once advertised on China Bidding Online and listed the 610 Office as its “business owner.” 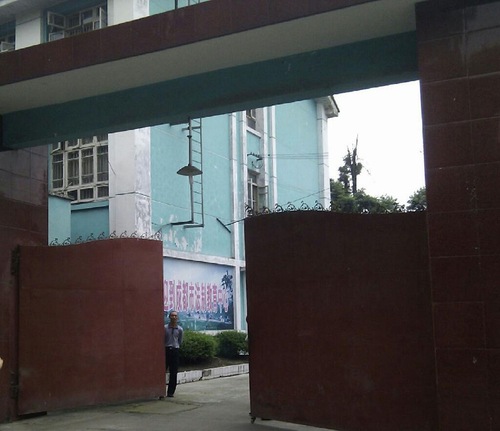 Xinjing Brainwashing Center is located in Caiwan Village, Huaqiao Town, Xinjing County, Chengdu City. This brainwashing center is located on the site formerly belonging to Xinjing County Drug Rehabilitation Center. Nearly one thousand practitioners have been detained and brutally persecuted there, and several practitioners have been tortured to death. Among those killed are Ms. Wang Mingrong, former head nurse of Ankang Hospital of Chengdu City; Mr. Xie Deqing, a retiree from the Chengdu City Exploration and Survey Design Institute; as well as Mr. Li Xiaowen, Mr. Li Xianwen, Ms. Deng Shufen, Mr. Liu Shengle, and several other practitioners whose names are still unknown.

A Chengdu government staff recruitment advertisement from the website of the Chengdu Environmental Protection Bureau listed all the job openings for the city government in 2012. Among them, job number 387 shows that the Chengdu City “Legal Education Center” had an opening for a managerial position for the “General Affairs Department.” It lists the 610 Office as its authoritative organization.

The government of Qingzhou City, Shandong Province arrested a large number of practitioners during June and July of 2008, claiming that the arrests were related to “security” of the Olympic Games. The majority of the arrested practitioners were detained in “Qingzhou City Legal Training Center,” which is located inside the courtyard of the former Guashiqiao Police Station. The current head of the center is Duan Wenzhu. 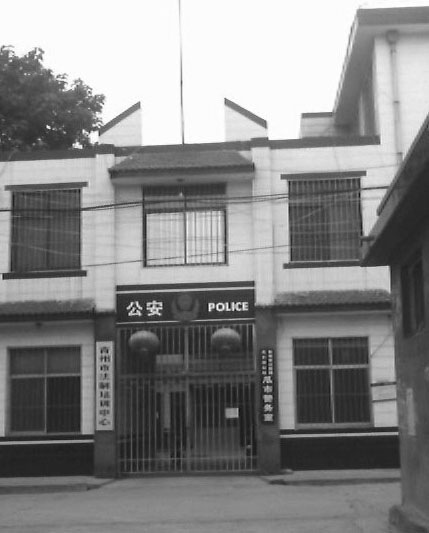 On the website of the Qingzhou City Political and Legal Affairs Committee, it lists Qingzhou “Legal Training Center” as an institution whose primary task is to “transform” Falun Gong practitioners.

Changsha City “Legal Education Training Center” in Hunan Province is known to the public as Laodao River “Brainwashing Center.” It's located in Zhongling Village, Laodao River Town, Kaipu District in Changsha City. Originally, the local government had planned to build a home for seniors, but in 2002, the Hunan Province 610 Office bought the land for a much higher price to build a center to brainwash practitioners.

On September 1, 2012, the Hunan Province Political and Legal Affairs Bureau, 610 Office as well as the Provincial “Transforming” Foundation – Changsha City “Legal Education Training Center” launched a “rolling” brainwashing center which was held throughout the entire province. If a practitioner left the center, they would arrest another practitioner to fill the vacancy, hence the term “rolling.”

Since then, this center has detained nearly one thousand practitioners from Hunan Province. Ms. Jiang Meilan, from Xintian County, Yongzhou City of Hunan Province, was arrested on September 7, 2012 and incarcerated in Laodao River “Brainwashing Center.” Towards the end of that September, she was on the verge of dying due to the torture that she had suffered. On October 1, her family was finally permitted to bail her out and took her to the emergency room. She died on October 2.

On the “Industries of China” website, there's an introduction for “Laodao River Brainwashing Center” which states that the center’s primary role is to “transform” Falun Gong practitioners.

On the “Hunan Public Exams” website, there was a job advertisement posted by the Changsha Legal Education Training Center in 2009 to hire staff to work for the center after passing the exams. That advertisement explicitly states that the municipal level 610 Office does a background check of all candidates applying to the center’s jobs.

On the “Changsha City 2012 Institutions Annual Legal Persons” bulletin, the primary sponsor of the “Training Center” listed is the Changsha City 610 Office.

The center has been in operation since January 2002. Many practitioners from Linyi have been persecuted there. Ms. Kan Jixiang from Mengyin County has been tortured to the point of mental collapse. Chinese medicine doctor Ms. Liu Yanmei from Yinan County became mentally disoriented and is unable to handle basic daily routines after suffering brutal torture. This brainwashing center was selected as a model work-unit for the entire province. People from various places have come to Linyi to “learn” from their criminal experiences. 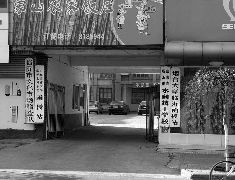 In the past ten years, over fifty brainwashing sessions have been conducted in this brainwashing center, and 1,200 Falun Gong practitioners have been detained there. The center uses cruel tortures on practitioners to forcibly “transform” them, and because of that, it has been recognized as a “Model Institution of Nationwide Education and Transformation” by the CCP Central Government 610 Office. It has also been recognized by the CCP central 610 Office, Hubei Province 610 Office, and the Bureau of Justice.

The Hubei Province Justice Bureau website lists an introduction for Hubei “Legal Education Institution,” which said that it mainly reported to the Hubei Provincial 610 Office. Apparently, this institution is another example of “a wolf in sheep’s clothing” – a black jail disguised as a “legal institution.”

Torture as a Tool of Persecution

The article “Walking Out of Masanjia” (the title was changed to “Uncovering Masanjia Women's Forced Labor Camp in Liaoning Province: Tied to Tiger Bench and Death Bed" when it was re-posted on the Internet), published by a mainland Chinese media outlet on April 7, 2013 exposed the darkness of Masanjia Forced Labor Camp. However, this article did not report on the primary detainees persecuted in this labor camp – Falun Gong practitioners.

To force practitioners to renounce their faith, the CCP sets up various kinds of brainwashing centers under the name of “Legal Education Centers,” but the degree of viciousness and brutality carried out inside these facilities is incomparable to the CCP’s forced labor camps.

3. Family members who accompanied practitioners are implicated and their lives and jobs threatened.

4. Steadfast practitioners are confined, detained, and isolated; prohibited from leaving their rooms or talking to anyone; forbidden to use the toilet outside their room or leave their room so long as they refuse to renounce their faith; forced to stand facing the wall or sitting on small stools for long periods of time; subjected to sleep deprivation.

5. Being indoctrinated with various lies, slanders and propaganda; forced to watch fabricated self-immolation videos, photos and books of murder cases, suicide cases, and other framed or completely fabricated cases; forced to write the Three Statements to denounce Falun Gong; forced to choose between informing on other practitioners or suffering torture.

7. Forcing practitioners to step on the photos of the founder of Falun Gong in order to go to use the toilet or eat.

8. Practitioners are forced to criticize themselves and must tearfully state that they regret practicing Falun Gong. The must say that they deserve to be detained, fined, incarcerated, tortured, and their Falun Gong books and materials should be destroyed; the non-compliant are regarded as “non-transformed” and are sentenced to forced labor or prison terms.

9. Practitioners on hunger strikes are punitively force-fed with tubes inserted inside their stomach.

10. Practitioners being forced to sing songs to praise Jiang daily.

11. Practitioners are forced to do physical exercises and Taichi every day, but are prohibited to practice the Falun Gong exercises.

The CCP’s top priority is to destroy the victims' faith, belief and souls, and then their physical bodies. The 610 Office is manipulating the so-called “Legal Education Centers” to accomplish this sinister goal.