“We had group Fa study and practiced the exercises,” said one teacher. “We also sent righteous thoughts, wrote stories, and played educational games. We improved as a whole.”

“Only in the environment of the Minghui School can I easily cultivate my every thought,” explained one student. “That is because even our homework is focused on cultivating our minds!” 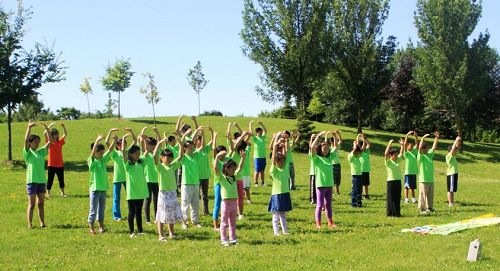 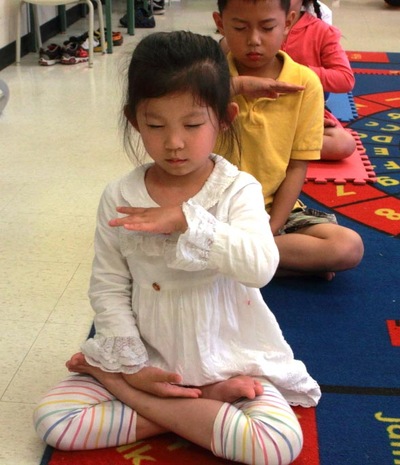 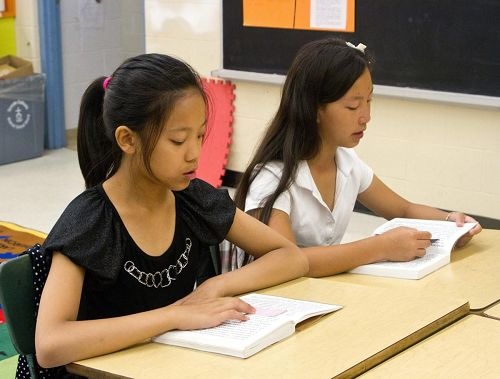 Studying the Fa together 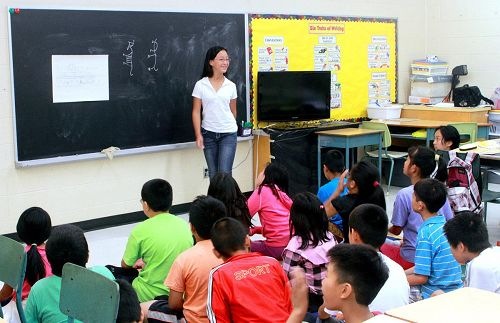 Cultivating our every thought

For the past several years, Sunny's grandmother has been driving her and her brother from Mississauga to Toronto to participate in the Minghui summer camp.

“My brother and I look forward to attending Minghui School,” said 11-year-old Sunny.

“The homework that our teacher gives us has to do with cultivating our every thought. How many thoughts does a person have in any given day? I think there are probably thousands. I would like to talk about three thoughts that I had today.

“The first thought that I would like to talk about is was when I went to the restroom and I saw that it was not as tidy as it usually is. 'Why doesn't the school staff attend to this?' I complained. 'It's their responsibility to look after these things.'

“Then I thought, 'I'm sure they were just too busy to take care of this one restroom.' So, I took a few minutes to straighten things out and sang a song as I was finishing up.

“The second thought I'd like to talk about was when I one was doing the sitting meditation. My legs were aching so bad that I had tears in my eyes. Just as I was getting ready to uncross my legs, I thought: 'I am a Dafa practitioner and my karma needs to be dissolved. If I put my legs down, the energy mechanisms will not move as smoothly. I have to forebear!'

“As soon as I had this thought, all the pain in my legs disappeared. I knew that the karma had been dissolved.

“The third thought occurred after class, when my teacher talked to me privately about how to improve my music skills. I then went to the cafeteria and saw a long line of students standing in front of two microwave ovens. I remember complaining to myself, 'If the teacher hadn't talked to me, I would have been in the front of the line instead of the back!'

“I realized that my thought was not righteous and that I should not blame the teacher for trying to help me. 'Whoever arrives in the cafeteria first, should stand in front of the line,' I thought. 'If I had been in the front of the line, others would have had to stand behind me. Practitioners should think of others first.'

“Then I stood at the end of the line with a big smile on my face. It was the best lunch that I ever remember having!

“I believe that I will do better from now on, in every thought that I have.”

“Young practitioners are cultivating during the Fa-rectification period,” said Yanzi, one of the Minghui teachers. “To encourage them to save sentient beings, I prepare informational materials and ask them to make phone calls to China to help people quit the Chinese Communist Party (CCP) and its affiliated organizations. Many did a good job.”

“I made phone calls to China almost every day,” said 11-year-old Doudou. “I once spent 40 minutes persuading a person to quit the Party. I briefly clarified the facts to him then asked him several times if he was a CCP member. Each time he quickly changed the subject. He then became impatient and said that he had already quit the Party.

“I told him that only if he quit from the bottom of his heart, does it count. He again shifted the subject, but I still kept talking to him. In the end, he sincerely agreed to quit the Communist Party.”

Linda, a senior student, also made phone calls to China. “Once I called a lawyer who said that the Chinese regime pays him very well to do his job,” she said, “and thus he had no incentive whatsoever to quit the Party.

“I told him that at first glance it looks like the CCP is paying him well but actually, it has taken everything from the Chinese people and is simply giving him back a paltry amount. I then told him that if he quit the Party, his career would be not affected at all because he only needed to quit in his heart and mind. He immediately agreed to withdraw his memberships to CCP organizations.”

“After I hung up, I realized that I had not told him to remember: 'Falun Dafa is good and Truthfulness-Compassion-Forbearance is good.' So, I called him back up and told him.”

Teachers in Minghui School Benefit Just as Much as the Students

“I teach the 8-12 year old group,” said Yanzi. “Initially, it was very hard for me to discipline them because they did not listen to me and were sometimes naughty. I tried using ordinary means to change their behavior, but it never worked.

“As I got to know them as individuals, though, I changed both my view of them and the methods I used to communicate with them. We are all continually benefiting from each other.

“When they first started doing the Dafa exercises, I noticed that they were always fidgeting about. One scratched his ear, here, while another touched his face, there. No matter how much I complained, they found it hard to be still.

“One time when I did the sitting meditation with them I felt a very serene energy field surrounding us. Although children may sometimes find it hard to be still, they do have a pure nature. After taking the time to understand them, I stopped complaining and started to encourage them.

“Sometimes, when the children are not focused while reading the Fa, I remind them about how easily water crystals are affected by righteous thoughts.

“'When kind and compassionate words are spoken to ice crystals, their form and structure are positively affected. Likewise, when we read Dafa materials, we need to be in the best mental state that we can be in.' As a result, the children are becoming increasingly interested in reading Dafa books.” 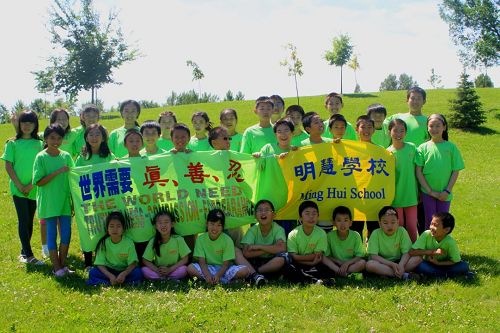 Wen Wang, the coordinator of the Toronto Minghui School, has attended every summer camp since the school began in 2007. “I feel happy seeing the children grow up and mature,” she said.

“Summer camp only lasts six weeks out of each year. The rest of the time the children are with their parents. I hope that the parents will devote some time to helping the children read the Fa and practice the exercises. In this way, the whole family will improve together!”