(Minghui.org) Falun Gong practitioners in Italy held an event in central Milan on July 20 and 21 to expose the Chinese Communist Party's (CCP) 14-year campaign of terror against Falun Gong. Many people signed a petition calling for an end to the persecution of the practice in China. 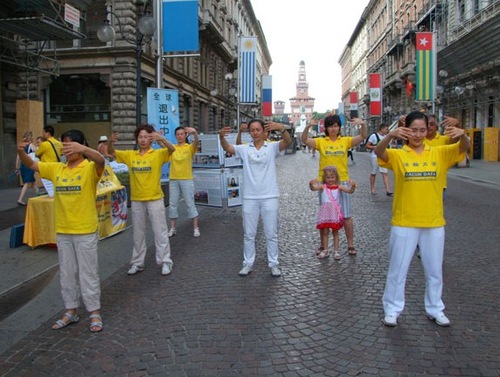 Practitioners demonstrate the exercises in Milan 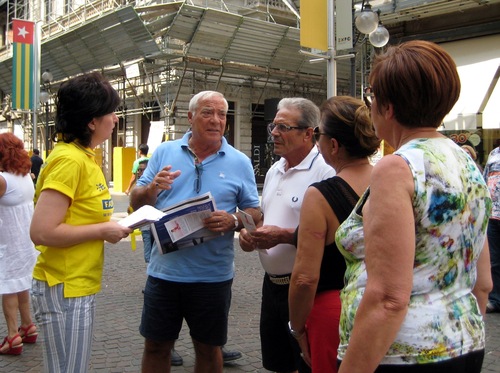 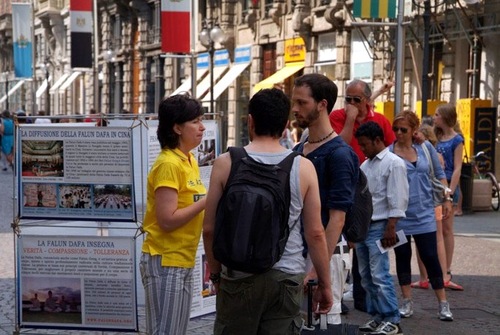 Passersby listen carefully to a practitioner explain the facts

Several members of the United Nations High Commissioner for Refugees, who were also holding a human rights event in Milan, watched the practitioners demonstrate the five Falun Gong exercises and read the informational display boards.

When a practitioner told them about the Chinese regime's persecution of Falun Gong, including the CCP's practice of harvesting organs from living Falun Gong practitioners, they immediately signed their names to a petition calling for an end to these atrocities. Before they left, they asked for fliers and brochures to take home.

When two tourists from Sri Lanka asked, “What is Falun Gong?” a practitioner told them, “It is a spiritual practice from the Buddhist school that is guided by the universal principles of Truthfulness-Compassion-Forbearance. By practicing Falun Gong, a person's character steadily improves, and he or she experiences many health benefits.”

The practitioner told them that the Party intentionally destroyed traditional Chinese culture, principles, and morality. Since Falun Gong stresses the very things that the regime has worked so hard to destroy, the Party saw this as a threat to its power and started to suppress the practice, including harvesting organs from living practitioners.

The two tourists immediately signed the petition and gave the practitioner two thumbs up.

The Chinese Communist Party is not China

A Chinese tourist told a practitioner that he loved China but was ashamed at how badly the Party was treating his fellow citizens in China. This dilemma caused him a lot of pain and confusion.

The practitioner told him that his conflicted feelings were due to the fact that the Party has brainwashed the Chinese people into thinking that China is the CCP and that the CCP is China. "If anyone truly loved China, he would not belong to the Party."

The practitioner added that, because the regime intentionally supplanted correct principles with wrong ones, most Chinese people in the mainland confuse wrong for right and right for wrong. Although he said that he thought the CCP would soon fall, he was still worried for those Chinese who still refused to quit the CCP.

On July 21, practitioners held an event in Milan's Chinatown. They tirelessly clarified the facts to Chinese passersby, told them about the principles of Truthfulness-Compassion-Forbearance, explained why they needed to quit the Party and its affiliated organizations, and encouraged them to withdraw from it so that they would have a bright future.

Five Chinese students told a practitioner that Falun Gong was not allowed in China “because the Party cannot tolerate good people!” They also asked a practitioner to help them quit the CCP using their real names.

During the two-day event, more than 30 Chinese people understood the truth and quit the Party.

“Near Death, Ms. Ding Liyan Recovers after Being Released from Detention Center”