"Free China" Holds Private Screening in the US Congress

By a Minghui Correspondent in Washington DC

(Minghui.org) On August 1, about 100 guests attended a private screening of “Free China: The Courage to Believe” at the Rayburn House Congressional Building in Washington DC. As many congressional offices continue to learn about forced organ harvesting of Falun Gong practitioners in China and consider co-sponsoring House Resolution 281, the film offers additional perspectives. Many guests are congressional staffers from the Senate and the House. A few are from other government agencies.

Kean Wong, producer of “Free China,” started the private screening by revealing the new theme song incorporated into the theatrical version of the film. “The Courage to Believe” is sung by Q’orianka Kilcher, a young actress known for her portrayal of Pocahontas opposite Colin Farrell and Christian Bale in “the New World.”

Kean Wong, producer of “Free China,” addresses the guests at the private screening on the Hill. (Minghui correspondent) 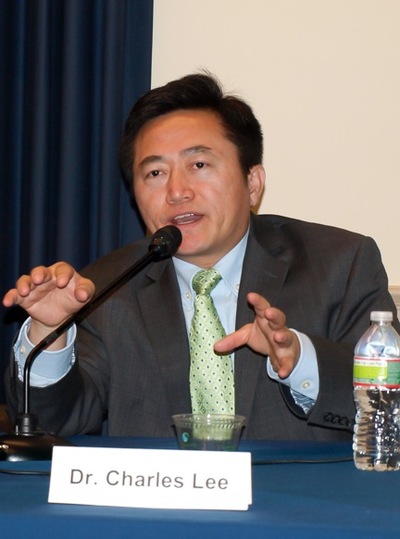 Dr. Charles Lee, one of the subjects of the "Free China" film, speaks during the Q&A session of the screening (Minghui correspondent)

Commenting on the issue of forced organ harvesting, one congressional staff member says: “It’s too tragic. The world is too silent on the subject… We should speak out more, force China to honor their international agreements, and allow complete inspections and total truth, and not just paper forbidding organ harvesting.”

Another congressional staffer tells Minghui: “It’s appalling to see the human rights abuses that are occurring in China. A lot of it is not something in the mainstream. It’s certainly something of concern that needs to be looked at much closer, so that human rights can be restored there. In order to do so, we have to bring the real situation to light.”

She also has a message for Minghui to pass to Falun Gong practitioners persecuted in China: “Continue to hang on and to keep that faith going forward for a better future. [A better future] is what’s going to happen.”

A congressional committee staff learns from the film that the Chinese government at one time encouraged Falun Gong and thought it was good.

She commented: “This is all enlightening to people. Why does the Chinese government not respect freedom of religion? … [The Chinese communist party] is a government religion. It is very closed. ‘You must do it our way and our way only. There’s no individual thought.’ ‘Gee, that’s really nice, but I really want to do something else.’ ‘No, no. Now you are criticizing the state, violating the state, and therefore, you will be punished.’ Well, to me, it is… I just cannot relate to that. That will never, never be allowed in the United States!”

The congressional committee worker also learned more about the practice: “Falun Gong is peaceful, spiritual, controlling of yourself... Isn’t what we all try to pursue is bettering ourselves? Wouldn’t civilized societies benefit from people trying to improve themselves, trying self-control, not giving into jealousy and other kinds of things? You have to be able to control your own feelings and emotions. I think that’s what is behind the practice of Falun Gong.”

She continued: “I have seen the Falun Gong demonstration in Washington, but I really didn’t know what they were about. Now I have much greater appreciation for the message they are trying to promote and expose to people like me about what they are about and what’s happening to them.”

Many guests are impressed by the film’s stories of Jennifer Zeng and Charles Lee.

When asked what he is most impressed by, one congressional staff puts it this way: “the fortitude and bravery of the people willing to challenge the system.”

Another said: “It’s an amazing story of endurance in terrible circumstances. The power of faith, the power of family, and the power of the draw towards freedom… I’m very impressed with the strength of both individuals highlighted in the film. They are heroes. They are amazing people, very strong!”

“I thought Jennifer and Charles were magnificent spokespeople, really enjoyed learning from them. I was horrified by their personal experiences. Charles was an American citizen and how he was treated!” says the congressional committee staff.

Mr. Chatodd Floyd comes from Small Business Administration located at a nearby building. He has come specifically for the screening. Prior to this, he hasn’t heard of Falun Gong.

He tells Minghui: “I really enjoyed the movie. It was definitely eye-opening. I have heard about the control of the Internet. I didn’t really understand what was going on in the forced labor camp. It is completely eye-opening as far as the persecution going on in China.”

No Stranger on the Capitol Hill

This is the fourth time of “Free China” private screening in the Congress. The first screening of the preliminary version of the movie occurred during July 20 events in 2011 at the Rayburn House Congressional Building. Congressman Chris Smith of New Jersey and the Foreign Affairs Committee hosted it.

The second and third screenings in September 2012 and April 2013 were both held at the Capitol Visitor Center. On September 18, 2012, as part of the international launch of “Free China” private screening, a panel of distinguished speakers including Congressman Chris Smith, Dr. Katrina Lantos Swett, Chair of U.S. Commissions on International Religious Freedom (USCIRF), Michael Horowitz with the Hudson Institute, and Michael Perlman, Director of “Free China” engaged in-depth discussions on human rights in China with the audience.

Directed by Michael Perlman of “Tibet: Beyond Fear,” and co-produced by New Tang Dynasty Television (NTD), the award winning 53-minute documentary tells the remarkable survival stories of two individuals, who were tortured and subjected to slave labor for their spiritual beliefs. They are two among the millions of peaceful Falun Gong practitioners in China. Through their stories, the film puts a human face on the Chinese state’s human rights abuses, including arbitrary detention of dissidents, export of products made by forced prison labor to the West, and the harvesting of organs from live prisoners of conscience.

“Ms. Wang Zhenxiu Sentenced to Seven Years in Prison, Her Brother and Husband Dead After Torture and Abuse”

“Near Death, Ms. Ding Liyan Recovers after Being Released from Detention Center”