(Minghui.org) Practitioners in Switzerland gathered on July 27, 2013, in the capitol city, Zurich, to collect signatures on a petition calling for an end to the Chinese Communist Party's (CCP) practice of harvesting organs from living Falun Gong practitioners.

Many locals and tourists read the informational display boards, which detailed the atrocities that routinely take place in China against Falun Gong, then signed their names to the petition, showing their support. 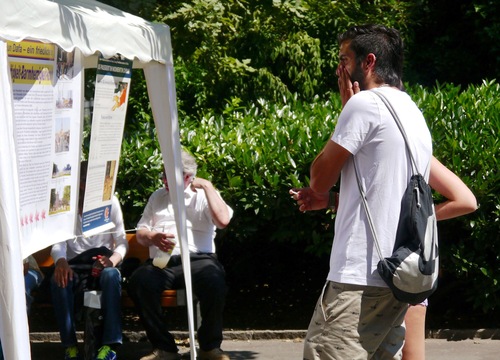 Passerby is visibly shocked by the CCP's crimes against Falun Gong 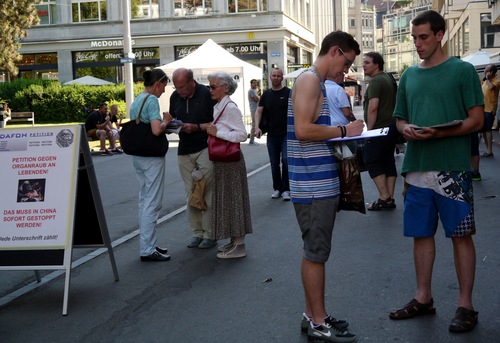 When Mosche, who is a devout Catholic, heard about the Chinese regime's persecution of Falun Gong, he quickly signed the petition.

"This is a heinous crime against human beings and human dignity!” he exclaimed. “For money, people are being murdered, and healthy people are having their organs removed. This is truly shocking. I am very shocked!”

He expressed sincere hope that his signature would allow more people to know about the Party's cruel and base nature.

“You should let the whole world know what this unconscionable regime is capable of doing,” Mosche said to the practitioners. “People really shouldn't do business with a regime that is murdering people behind the scenes."

Before he left, he asked for a stack of fliers so that he could hand them out to his friends.

"I can also support you by informing my friends about the shocking things that are happening in China."

A man named Peter, along with his wife, signed the petition after finding out about the Chinese regime's persecution of Falun Gong. The couple carefully read the informational display boards depicting the torture methods used on Falun Gong practitioners in China.

"I never heard about this before,” said Peter. “This is truly scary. We always talk about human rights issues, but I knew nothing about this [organ harvesting]. I'm really shocked. If we have to do business with China, we should at least compel the Party to stop these crimes against humanity.

"I think that Falun Gong has a positive effect on everyone, so I cannot understand why the regime feels the need to suppress this beautiful spiritual practice."

"On the surface, it looks like one person's signature has very little power to change things. However, if enough people sign, we will be that much closer to our goal of ending the persecution."

"Removing organs from living people is a severe violation of human rights," said Anja, as she was signing the petition form. "How can they deprive people of their right to life? If we can stop this atrocity, of course, we should take action!"

Daniel and Amel stopped by the Dafa informational booth. Amel said that she hoped that her signature would help stop the CCP's human rights violations.

"Such an awful thing is happening in China," said, Daniel. "People who are striving to be good are being tortured. This whole thing has gone too far. I hope that the persecution can be stopped very soon."

Some people asked for a few petition forms to take back home with them. They said that they were going to ask their friends and neighbors to sign the petition, too.

A Chinese woman asked why so many people were signing petition forms. After she was told why, she, too, signed the petition then said that she was interested in practicing Falun Gong.

“We Harm Ourselves and Others When We Ignore Cell Phone Security”

“Elevating in Understanding, Compassion, and Cooperation While Reaching Out to Our Elected Officials ”