The Devastating Torture Endured by Ms. Chen Yulian for More Than 3 Years (Photo)

Ms. Chen Yulian has, since 1999, been subjected to severe persecution for clarifying the facts about Falun Gong to the public. She was sent to a brainwashing center in 2000. In 2004, she was sent directly to a detention center. In 2008, right before the Beijing Olympic games, she was sentenced to a one-and-a-half-year forced labor term. 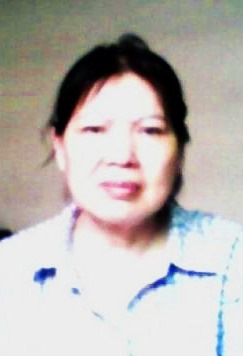 When Ms. Chen Yulian was distributing Shen Yun DVDs in May 2011 in the Ximazhuang Market in Nanchang City, she was arrested and sentenced to two years in a forced labor camp. In the Jiangxi Province Women's Forced Labor Camp, she suffered inhumane torture for three and a half years.

Hung Up by Handcuffs, Long-Term Binding, Needle Piercing and Head Smeared with Glue

When Ms. Chen Yulian began her forced labor term in May 2011, she was firm in her refusal to participate in the forced labor. She persisted in sitting in meditation. Chen Ying, the associate head of the brigade, handcuffed Ms. Chen Yulian to the metal rail of an upper bunk bed for 48 hours. Ms. Chen was deprived of food and the use of a restroom.

Because Ms. Chen still persisted in doing the Falun Gong exercises, she was subjected to torture by the drug addict inmates incited by the prison guards. She was often bound with rope or handcuffed in painful positions for extended periods of time. For example, her right hand was handcuffed to the rail of an upper bunk, while her left leg would be horizontally cuffed to the lower bunk bed, with her other arm tightly bound to her chest.

The head of the brigade, Hong Chuanghua, used a so-called “new product” to torture Ms. Chen. This is a super long, flexible cuff. During the torture, both of her legs were put close together and both arms were placed tightly on her chest. The flexible cuff was applied to her feet first, and then in a spiral went from her feet up her legs, to her abdominal area and then all the way up to her chest. At this time, her entire body could not move at all. She even had difficulty breathing. The more she tried to struggle, the tighter the flexible cuff would become. Ms. Chen Yulian was tortured like this for three days and nights.

At the end of 2012, Ms. Chen Yulian was handcuffed to a bunk bed when she was found doing the Falun Gong exercises. She loudly declared, “Falun Dafa Is Good!” The prison guards were afraid that people in other monitoring rooms would hear her, so they directed the drug addicts Hong Yan and Wang Xiaoqiong and security guard He Xueying to shove a dirty rag, laden with feces and urine, into Ms. Chen's mouth and then seal it with packing tape. This devastating torture lasted for several hours until Ms. Chen almost suffocated.

In August 2008, not long after Ms. Chen Yulian first arrived at the Women's Forced Labor Camp, the head of the brigade, Hong Chuanghua, bound her arms to her chest and then beat her back with a pair of shoes for over 10 minutes.

In the summer of 2009, since Ms. Chen Yulian refused to do the forced labor, the counselor Zhou Qianqin and heads of the brigade Lu Xiuying and Hong Chuanghua, directed two security guards to punch and kick her for 30 minutes.

Ms. Chen Yulian was nearly 60 years of age, but has been subjected to such unbearable, painful tortures. The perpetrators forced her to bend her body until her spine almost fractured. They also knelt on her arms and stomped on them. She nearly lost consciousness from the excruciating pain.

On a winter night of 2012, brigade head Shi Qiongying, associate head, Chen Ying, and sectional leader, Cai Yanfang, ordered the drug addicts to take apart Ms. Chen Yulian's bed. Ms. Chen had to sleep on the concrete floor. Then they poured cold water on the floor. Ms. Chen had to endure the hard, cold wet floor all through the night, and was unable to sleep at all.

During the years that Ms. Chen was in the Women's Forced Labor Camp, the prison guards also forced her to watch various propaganda videos slandering Falun Gong. The torture she endured was both physical and mental. Furthermore, the forced labor camp deprived Ms. Chen's family the right to visitation. They also threatened the personal freedom and security of Ms. Chen's entire family.

At the end of May 2013, after years of abuse and torture, Ms. Chen Yulian was finally set free. The scars and bruises all over her body, her swollen legs, and her mental devastation are the undeniable hard evidence of the tortures used on Falun Gong practitioners in the Chinese Communist Party's forced labor camps!