Israel: “There is a Holocaust in China,” Says Journalist, as Rally Marks 14 Years of Falun Gong's Persecution in China (Photos)

(Minghui.org) “There is a Holocaust in China,” stated Israeli journalist and broadcaster Billy Beserglick in her speech in front of the Chinese Embassy in Tel Aviv on July 22, 2013.

"I'm the second generation after World War II Holocaust. My parents were in Auschwitz and miraculously survived. [Otherwise,] I might very well not be here now,” she said. 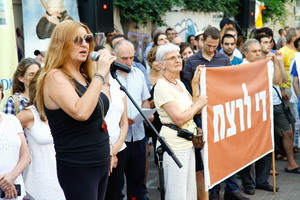 Israeli journalist and broadcaster Billy Beserglick speaks at the rally marking 14 years of the persecution of Falun Gong practitioners in China.

Ms. Beserglick imagined a woman her age being held in a basement of a forced labor camp after torture, “It's shocking that in 2013 a Holocaust occurs, and the world goes 'business as usual.'”

“Those are terrible things,” she said of the crimes committed by the Chinese communist regime. “Organs are harvested from people in concentration camps!”

“We should not turn a blind eye!” she concluded.

On this summer day, two hundred people didn't. They came to protest the regime's crimes against humanity and its 14-year-long brutal persecution of millions of law-abiding citizens in China--practitioners of the ancient spiritual cultivation practice called Falun Dafa (also known as Falun Gong), who believe in the principles of Truthfulness, Compassion and Forbearance.

Over these years, the Chinese regime has directed officials and agencies at all levels of government, and state-owned enterprises, to carry out the persecution, spending billions of dollars and sparing no expense.

The peak of the horror is the use of Falun Gong practitioners as a source of organs for transplantation. In military hospitals and under heavy military supervision, organs have been harvested from people while they are still alive, so that the regime and its cadres can get a higher price. Tens of thousands of Falun Gong practitioners have been killed this way, and thousands more were killed through other types of horrific torture in forced labor camps and prisons across China. 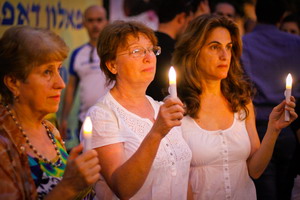 Candles lit in memory of Falun Gong practitioners killed in the persecution in China.

A peaceful rally marks 14 years of the persecution of Falun Gong in China. 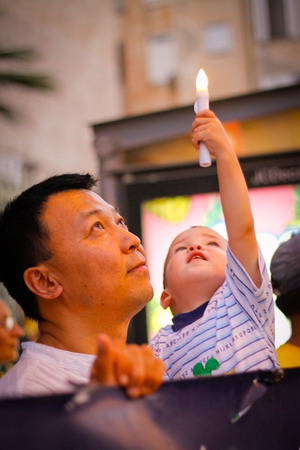 This child's aunt was tortured for two years in a forced labor camp in Beijing. 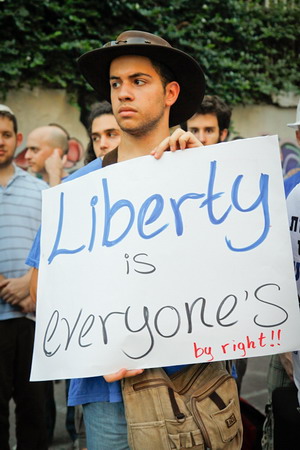 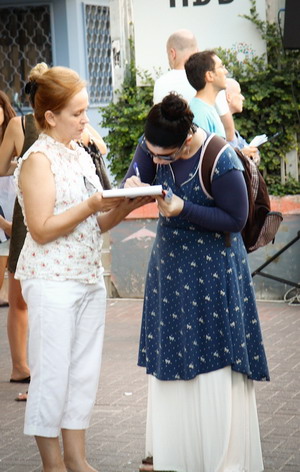 People sign a petition calling for an end to the persecution in China.

“It was jealousy that stirred up the persecution,” explained Roy Bar-Ilan, a spokesperson for the Israeli Falun Dafa Association, “because it is an amazing cultivation practice. It became very popular very quickly in China, and then all of a sudden, tens of millions of good people became the largest group of prisoners of conscience in the world. The severity of the persecution – rape, shocks by electric batons, 45,000 to 60,000 organ harvesting cases, according to modest estimates – millions of people, of families, have suffered intensely and on an unparalleled scale.

“At first, everyone repeated the propaganda, and thus, in fact, promoted the persecution. Yesterday I found an article published in a major Israeli media in July 2001. It was written there that 14 practitioners had committed suicide in prison, and the prison authorities had 'saved' 11 others. It was also written that the Chinese government had decided to place Falun Gong practitioners in labor camps and monitor them around the clock as if they were worried about their safety. This story made me cry. In actuality, it should have been a report on the murder of the 14 practitioners, [who were just] like me, my wife and my children.”

Bar-Ilan continued, “We were able to overturn the lies that the Chinese regime created as part of its repression. Now people in the world do not believe the lies of the Chinese Communist Party. Yet many still can't truly understand what Falun Gong is all about.

"To be a Falun Gong practitioner is to continuously try to improve oneself, to not blame others when encountering conflicts, but instead look inward, to not hit back when being attacked or sworn at, and to take loss and gain lightly.

"To be a Falun Gong practitioner is to get rid of selfishness and deviated thoughts. It is to strive to be considerate of others, to be an uncompromising moral example that does not bend in the face of profit or threat of any kind.

“In the face of the propaganda machine of the Chinese government, their media, embassies, and business and industrial relations all over the world, we are armed only with our hearts full of compassion and our determination to not let the evil, though influence, win the battle of humanity's morality and future.

“We go out [to raise awareness about the persecution] day after day not for any gain, but because we believe that mankind still has hope, that the hearts of human beings still harbor morality and kindness... And the fact that you are here today proves that we are right, proves that there is hope.”

Epoch Times Director: “Silence Is What Allows These Crimes to Carry On”

“One cannot be neutral,” said Gilad Slonim, director of the Israeli edition of the Epoch Times at the rally. “We [Jews] have been through a genocide, where a dictator decided to destroy us because what we believed in did not suit him, and now we are directly or indirectly helping the same kind of a regime to carry out this persecution.

“Thus, one can't be neutral in this battle. Everybody would like to be neutral, [thinking] 'Why get involved? Why put this pain into my head? It's happening so far away – it has nothing to do with us...' This is not true! It is related to each and every one of us. Everyone today has to take a side.

“Not taking a proactive step against this persecution is equal to siding with it, since then you agree to be silent. Silence is what allows these crimes to carry on.”

Two Chinese Falun Gong practitioners living in Israel spoke in front of the Chinese Embassy, addressing not only the crowd, but also people at the embassy.

"In my opinion, the day of July 20th will remain as a great shame in history of mankind," one of them said. "Why do I say so? Because 14 years ago on July 20th in China – such a big country with 1.3 billion people – the CCP [Chinese Communist Party] launched a brutal persecution of Falun Dafa."

"Falun Dafa practitioners are people of good reputation in China," she said. "There are many people who have a sense of justice and ask the 610 Office wicked policemen, 'You do not catch the bad guys but specifically target good people. What kind of people are you?'"

"Some people have done a test with a mobile phone, sending out a text message. Messages with the words 'truthfulness, compassion, forbearance' [the main principles of Falun Gong] were blocked [by the regime]. But messages with the words 'false, evil, fighting" were received. This shows to what extent the CCP has put China under its brutal control, so that the basic morality has been completely wiped out.

"However, the remaining goodness of Chinese people has begun to emerge as they learn the truth about the Communist regime. Now more than 140 million Chinese people have quit the CCP and its related organizations."

Voices of Support for Falun Gong

Dr. Amir Shani from the Israeli Freedom Movement called for the end to the persecution. In a taped interview he said, “We are here to express empathy and solidarity with innocent Falun Gong practitioners persecuted for no reason by the communist regime in China.” Many members of the Israeli Freedom Movement group from various sides of the political map and social spectrum came to support the rally.

Rabbi Chaim Cohen from the Rabbis for Human Rights organization has attend numerous rallies calling for the end to the persecution of Falun Gong in China. In a powerful voice he declared, “We must stop the terrible persecution against Falun Gong!" He added that trading between Beijing and Jerusalem must take into account human rights.

Herzl Hakak, chairman of the Hebrew Writers Association, and Balfour Hakak, the organization's former chairman, sent a statement to be read at the rally, "The phenomenon of psychiatric torture and organ harvesting is utterly shocking, both for their severity and scope, and for the betrayal of the 'doctor's oath,' which every doctor takes to protect the sanctity of human life. Here in front of us, are physicians within the establishment [in China] … using their medical knowledge to violate human rights and endanger human life.”

Rabbi Shlomo Aviner also sent a letter of support, “Be strong and brave for the sake of justice and righteousness, for the protection of every person on Earth who is unjustly persecuted. This is our duty to protest and raise our voices. And when all voices are joined, it will eventually lead to salvation.”

The rally was accompanied by the sounds of an Erhu (an ancient Chinese stringed instrument) solo piece, “A Bleeding Lotus Flower.” The music was composed as a protest against the Chinese regime's crimes of organ harvesting from living Falun Gong practitioners.

The solo tells of a true story revealed in 2009 by a security guard who had witnessed in 2002 how two military surgeons harvested the heart and kidneys of a Falun Gong practitioner while she was still alive.

This practitioner had been illegally arrested because of her belief in Falun Gong. She was a teacher, and the devoted mother of a 12-year-old son. While she was held in custody, she was brutally and repeatedly raped by the police. They also tortured her and shocked her with electric batons for seven days.

She was then taken to the fifth floor of the General Military Hospital of Shen-Yang City. The surgeon cut open her chest without any anesthesia, while she was fully conscious and wide awake. When the surgeon cut her heart arteries, she died.

Her last words were, “Falun Dafa is Good!”